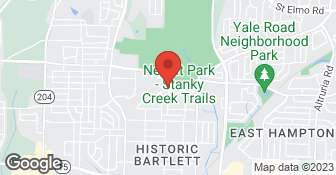 5 EMPLOYEES. USES SUBS FOR VARIOUS JOBS. COST IS DETERMINED BY THE JOB. NO TRAVELING CHARGES....

With over 20 years of professional experience, we are your Heating & Air experts in the Memphis area. Contact us today for an estimate! Pre-cooling tune up for $54.99.  …

A quality service is offered by quality individuals skilled in the trade, All employees are screened and trained to maintain the highest customer satisfaction. Old fashion customer service along with up to date equipment and diagnostic procedures ensures a lasting customer relationship. Infinity Heating and Air Conditioning will provide you with the Quality Service & Honesty YOU Deserve.  …

For many years, Owner Matt Davis has striven to build a solid reputation as the Mid-South's most trusted repair technician. Air Doctors of Memphis is dedicated to providing quality service to the community. They believe that a reputation as honest and reliable service technicians is the recipe for success. To Schedule an Appointment, send us a request , or call (901)598-HVAC Free Estimates! TN LICENSE #: 61198.  …

They give us a 20 dollar discount. We have used them for years.

Called Rick Stone to have two loose lavatory faucets tightened, a loose toilet reset and an exterior water faucet replaced at a Condo/Townhouse we own. Plumber who came to provide service quoted a fee of $ 564.12.I thought this was absolutely outrages. Trying to get the cost down, I asked for quote without exterior faucet replacement: $ 360.Told plumber that was still way out of line but realizing I was stuck with service call of $ 79 anyway I then asked him to just tighten the two loose lavatory faucets. The bill for this was $ 150 (including service call). The job took less than 15 minutes!I will NEVER use this company again!

I'm sorry that everything cost more than it should. Our prices are below the average rate in this area. Most people don't consider the time it takes to get to their house, insurance, Workman's Compensation insurance, training, office expense, licensed plumber labor and warranty. I have reviewed our quote and it is a very fair price for the job. Rick Stone
3.0

Had to have back out again, leak was still there. Did this on 6/11/2012. No warranty after this date per repair ticket.

We gave a price before the work was done and Member signed the ticket and agreed to the price. This repair was in a very difficult position to get to and was muddy and deep in the ground. It was PVC pipe glued together and it held together for about a month, then it started leaking. So we came back promptly and repaired the glue joint at NO CHARGE. I don't know why he is upset. We came back and repaired it at no charge and it hasn't leaked since. If there was a problem he should have called me. Thanks, Rick.
1.0

karen and ivan B.

I will never use this company again. I advise everyone to not use this company. I have to hire another plumber to come out and fix what Rick Stone's company messed up. Here's the whole story... I hired Rick stone Heating and Air to come help replace my shower faucets. I purchased the parts from Lowe's and had attempted to do it myself, but couldn't get the faucet seats off... so in came the plumber. He came, put on the parts that I had purchased (for both of my bathrooms), and gave me a hefty bill. A little more than a month later (on Dec. 31), both of the middle faucets came straight out of the wall with water flowing through them. I called the plumber and he came out to reinsert the parts. That evening, I went to take a shower and found that it was not fixed. Now, some of the water comes through the shower, while most of the water flows straight into the tub. I called the plumber the afternoon of January 4 and he told me that the parts I got were not bought from him, so they were inferior products and not expected to work properly. I replied by stating that I would take it back to Lowe's and tell them that he said that the products were defective. He quickly recoiled and stated that Lowe's would tell me that it was not the products I had purchased, but that the valve inside the wall is stripped and that the whole shower would need to be replaced. This makes me think that the plumber accidently messed up my shower and refuses to own up to it. I paid this plumbing company (Rick Stone Heating & Air) good money to fix my shower and now it is worse than before. They won't agree to fix my shower unless I pay them more money to gut and replace the whole thing and buy the parts from them.

Description of Work
I hired a plumber to come help replace my shower faucets. After Rock Stone Heating and Air messed up my showers, I have to hire another company to come clean up their mess.

The member purchased parts and attempted to begin work herself. Faucet should have been replaced to start with, but wasn't because she wanted us to use her purchased parts. We stood behind our work, but we are not able to warranty parts purchased by the customer. We are sorry that the member was not happy with our service. Rick Stone Plumbing & Cooling stands behind all labor calls with a 30 day warranty. If the customer does not follow our recommendation for repairs we can only do what the customer asks.
5.0

I was really glad that they were easy to get a hold of and made an appointment fairly quick with me. The man that came out was very professional and knowledgeable. He did a great job with the clean up afterwards.

Description of Work
When everything backed up in my bathroom I had to have them put in a new pipe line under the house.