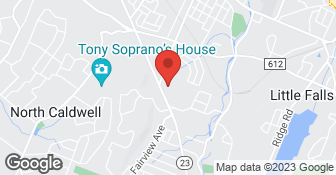 With more than 20 years of experience, the staff of Allen Chimneys is dedicated to providing you with exceptional chimney & fireplace installations, inspections, restorations, and repairs, in addition to chimney cleaning services at very competitive prices. We take the time to make sure everything is done right and we only charge you for the services you require. We are also the premier provider of chimney liner installations. Our goal is to provide the very best in the installation of your chimney liner. Because our quality control standards are high, our relining specialists are among the best in the business. Our goal is to always deliver satisfaction to all of our clients. We want you, our valued customer, to be happy....

It was fine. He did a nice job and I was very satisfied.

Description of Work
He rebuilt the outside of the chimney.

Thank you for taking the time to write a nice review for us. We generally appreciate your business!
5.0

Description of Work
We had a liner put in our chimney

Amazing service. Theron and Dave were professional and courteous. Work was done quickly and efficiently. Would highly recommend!

I called to make an appointment, and he showed up the very next day. He was flexible with the scheduling time, and he was very fair with the price. He also found that my chimney lining needed to be replaced, so he wrote up a project proposal.

Description of Work
He came to sweep my chimney, and he inspected the chimney lining for damage.

Dave was very neat and clean. They used their own blankets to protect our home and cleaned up after themselves (although there really wasn't anything to clean up!). Dave explained everything about the inspection, showed the images their camera captured, what we should and should not do, and what type of work was required. He also did a quick check of our gas logs! I should also note that the scheduler I spoke with informed me of their reduced pricing on Yelp which saved me $50. No doubt I would call this company back for any/all chimney work that we need.

Description of Work
Inspection and cleaning of our wood burning chimney

Work competed in a timely fashion. No problems after approximately 2 months.

Description of Work
Chimney needed to be sealed.

Thank you! We genuinely appreciate your business and for taking the time out to write us a review.
1.0

Be extremely careful if/when you hire this company. The are courteous, professional and do a good job, so you think. Six years ago, Mr. Allen installed a stainless steel chimney for a wood burning stove in my house. Since then, I have been a faithful customer. I referred multiple customers and had him clean my chimney yearly. He was courteous until last year when a neighbor started complaining that smoke from the chimney was entering her house and complained to the health department. It should be note that this person had never, ever complained before and I questioned the validity of her complain. Making a veeeeery long story short, I was recently contacted by the building department of my town and was asked to refrain from using my stove. As it turns out, and while the building inspector approved the chimney, the chimney was not built to code. The inspector approved the job in error and now I have to raise the chimney above the peak of the house. I was in communication with an attorney assuming that the town was responsible for this but was told that it was the contractor the one who should correct the problem. I have been in communication with Mr. Allen since the middle of august and have tried for him to correct the fact that he did not follow code when he did the job. He has had a multiplicity of reactions: initially he became very irritated and used foul language when addressing the and refused to do anything about it stating that we had passed inspection and didn't admit his mistake. He even hung you the phone on me. Then after several text and email messages as well as missed calls to him., he called me and said that if I paid for the lift he would do the rest. The lift costs $1,100.00 the material will probably be no more that $300.00. He called yesterday and asked me for a copy of the sticker the town gave me when inspection was passed. I sent him that and all the letters I have received from the building department He made it sound he was going to get back to me to work this out but he didn't. Today I have tried to reach him on several occasions but he hasn't responded. If you hire this company make sure you know the codes well because if the town makes a mistake and misses Theron's bad job, you will be in a horrible position. Theron will be courteous no more. He will become verbally offensive, hang up the phone and will not take responsibility for his mistake. Shame on Allen's Chimney for deceiving and lying to faithful customers, who were obviously faithful because I did not know that his work was not done to code. Be very, very careful. I like to note that I totally agree with Theron that the city approved the job six years ago and are now reacting to a complain that appears irrational. Nonetheless, he made a real mistake and should be responsible and correct it.

[Member Name Removed], this review does not even make sense. This job was approved by the town and is up to code. If it was not code, it would have never been passed by the city of North Bergen. The building inspector did not state that is was approved in error. That is an outright lie on your part. That is why a permit was pulled, to protect you and me. Plain and simple. Why would you use us for six years after without a problem and suddenly you have a war with your new neighbor, with whom you racially profiled and the woman was very offended. To get back at you, your neighbor decided to complain about your smoke from your wood stove. Yes, increasing the height of the chimney would result in less smoke, as I advised, however it was not necessary, as the building department approved. Continue on with your racially spurred war with your neighbor and leave my company out of it. We do legit work, always have, however you cannot please all people. Further, I do not aim to please people who want to put blame on an innocent company when it's an issue they are having with someone else.
5.0

Theron was timely and professional. Him and his team did a great job and were very friendly. Theron also explained to me how to use my fireplace insert (we were new homeowners) and even followed up with some information several years later when we were selling our home. Truly a pleasure to work with.

Work performed as stated and in time span quoted. Cleaned up after job! Most professional/honest contractor I have ever used.

What an amazing compliment! Thank you so much for this review. We truly appreciate your business as well!
5.0

Chose Allen Chimneys, LLC because of reviews. Extremely satisfied with chimney repair. Workers (pleasant and professional) spent most of the day and completed job as stated on proposal (above). (Also cleaned the fireplace chimney from inside) Had several quotes. Theron (owner) was the most professional and impressive--came and diagnosed the problem--described the procedure for repair--and gave a very reasonable estimate. He did not try to sell us additional repairs (as some of the other companies had) and the price was best. Dealing with this company from beginning to end was a pleasure.

Description of Work
Exterior chimney repair. Removed the soldier courses of brick from top of chimney. Installed 3 courses of brick to create a drip edge. Ground all mortar joints between the bricks from the flashing to the top 1" deep. Re-pointed all mortar joints from the flashing to the top with new cement, concave joint finish. Applied a new cement crown on top. Resealed the chimney flashing. Sprayed the entire chimney with Chimney Savers water repellent.

Thank you so much for this incredible review! We truly appreciate you and your business. We are so glad that you are satisfied with our services! Further, if we could be of any assistance to you in the future, please feel free to reach out.

With over 7 years of professional decking, hardscaping and masonry experience, here to help you design and or install what you need or are dreaming about.  …

NO DEPOSIT, NO PAYMENTS, UNTIL THE JOB IS DONE!! Avellino Custom Masonry, Inc., is a family owned business from Italy and has been in business for over 40 years (owned and operated by Billy Magro & Erin Walsh). Our company has a reputation for excellent service, and we will be happy to provide references upon request. The combination of our knowledge, professional equipment and the finest materials will give you an expert job that will last for many years. Our comprehensive services include brickwork, stone work, curbing, concrete work, paver/interlocking block projects, walkways, retaining walls, fireplaces and all types of waterproofing/drainage problems. The intricacies of drainage, construction and material selection require attention to detail and expertise in masonry plumbing. Avellino Custom Masonry, Inc. combines dependability and art to create construction you will enjoy for years to come.  …

Allen Chimneys LLC is currently rated 4.7 overall out of 5.

No, Allen Chimneys LLC does not offer eco-friendly accreditations.

No, Allen Chimneys LLC does not offer warranties.

Are there any services Allen Chimneys LLC does not offer?