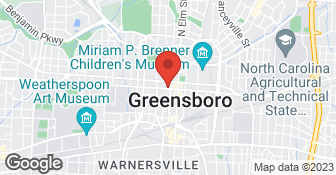 If you are struggling with plumbing issues in Greensboro, North Carolina, let the professionals at Bare Tech Plumbing ease your concerns with our affordable plumbing services. Give us a call at any time and our highly-skilled plumbers will arrive quickly at your home, prepared to accept any challenge that faces them. Bare Tech Plumbing services include leaky faucet repair, toilet replacement, dishwasher installation, and water line installation. No matter what plumbing project you need completed, our plumbers will be able to complete it, while still maintaining the cleanliness of your home, for an affordable price!...

Master Services is your local, certified basement, crawl space, and foundation repair specialists. They specialize in professional services that improve the health and functionality of your below-grade space: Basement Waterproofing Crawl Space Repair Sump Pumps Foundation Repair Concrete Lifting and Leveling Humidity and Mold Control We will make your basement, crawl space, and foundation safe and usable. With free, no obligation estimates, patented products, and lifetime warranties you can rest assured we have the best solution available on the market to fix your problems permanently.  …

Serving The Triad and The Triangle Action Well & Pump has experienced, licensed well contractors that have been in the water well business for over 30 years. We offer free estimates, same-day service, and emergency services. If you are experiencing well or pump problems, no water, low water pressure, or dirty water, feel confident that we have a fast solution for you. At Action Well & Pump, we carry a fully stocked truck which allows us to not charge our customers the trip charge. We have everything you need to get an efficiently working well and pump. We also work with all insurance companies to get your claim filed in a timely manner. The best part about Action Well is We Are Local!  …

After five days the toilet started overflowing, again. I have to call them back out.

Description of Work
Main Line Backed up and Toilet Overflowing

We serviced a different address for [Member Name Removed] on 1/5/2017 and have not heard back from her. If there was a problem with the service this is the 1st we have heard about it. And our invoice amount, date and address is different than that mentioned. We think she may have called someone else. We do offer warranties and free check ups for previous work performed.
5.0

Great. Dealt with Matt in the office over the phone. He sent John to provide a free quotation. Once we made our decision, I ironed out the details with Matt on the model to be used, the requirement for a drain pan and drain to the exterior and removal of the old heater. John and Mike did the installation in a couple of hours. I paid Matt over the phone with a credit card. Mike and John did a nice job and left the basement free of all debris.

Description of Work
Replacement of a Direct Vent 50 gallon gas water heater with a drain to the exterior.

The did good work but they are very expensive.

Description of Work
I purchased a Big Deal for them for $95. They cleared a drain.

I spoke with them over the phone and he was very nice but informed me that they are no longer doing any business with Angie's List.

Description of Work
I purchased a Big Deal.

Technician replaced a faucet, and identified an issued with our water pipe turn-off valve that we needed to repair which was very helpful.

They reached out shortly after purchase to schedule. They did not reach me via phone, so they emailed. I called to set up the appt. We agreed on a time just 1 day away. When I got home 5 miniutes prior to the scheduled appt, they were there waiting on me and were already working. They were quick and polite and did quality work.

Description of Work
Replaced outside faucet as part of Big Deal.

We set up an appointment to have the service completed. They came out but because of the way the house is built, they were unable to do it.

Very professional. The work was done quickly and well.

Description of Work
Rooted the outdoor drain in our driveway.

The plumber was unable to determine where the pipes were frozen. He advised us to put a space heater in the crawl space, which did not correct the problem. He returned to replace the gas control valve about an hour after his first visit, as we had a home warranty in place from purchasing the house a year earlier. This did not correct the original complaint, as there was no water flow. I later opened up a couple of holes in drywall to find the source of the problem, only to find un-insulated pipe runs in an attic area.

Description of Work
During a cold snap in January, we had a hot water-pipe freeze up.

We have had some extreme cold spells this past winter. Colder than usual. We could not pin point the frozen pipes at the time of service. Space heaters should never be used in crawl spaces or attics. Non insulated pipes in the attic that have never froze before now. Lucky they didn't burst and flood the home. We did not charge for trying to find the froze pipes. Notice no complaint on the water heater issue he was having. However the next day the temperature began to rise and the pipes thawed.

We don not INSTALL POLLS OR BOILER HEATING SYSTEMS.