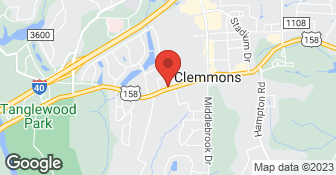 Tony Crawford has put together a phenomenal team. From painting to woodwork inside and out it was obvious that each worker is skilled and takes pride in their work. They were always quick to return my call or text and to respond to any questions or concerns we had. I would recommend them to anyone.

Description of Work
A lot of work was needed. New hardwood floors, carpeting,new ceilings,paint inside and out, new gutters,

I have a hard time even beginning to express my disappointment with Crawford Home Improvements. I had a hard time finding any contractor who would do 203k work. Crawford was the only licensed contractor I could find. They knew I was stuck with them and they fully took advantage of me. They didn't do any of the important work on my house how I wanted it. I wrote a complaint letter to BBB and I'm still trying to get them to finally once and for all do things the way I wanted them to. When I first met with Darrin Spencer, he wrote down his notes on the back of a manila envelop and clearly failed to do so in a detailed manner. Never once in those 2 months did Darrin consult with me. When I got the quote, it was not clear at all what they were going to do or how it would get done. I'm sure the ambiguity was part of their plan. It took them twice as long to get the work done as they initially said it would. The whole time they weren't doing things the way I told Darrin I wanted them to be done when we first met. Considering the way he took notes at that meeting, its not surprising. A very very unprofessional lot they are. Don't let the fine pics of their webpages fool you. Those are not customer homes. They are their personal homes. I used to get so p***** at Darrin. He'd tell me that it was only making things worse but whenever I fussed at him is when they would finally do something the way I wanted it. I ruined my voice from it all. No I don't recommend them. Addendum: 2/8/15 I wrote a complaint letter to the BBB and went back and forth through them with the contractor, Tony Crawford. Tony continued to insist that a return air can would not fit where I wanted it located as his HVAC sub claimed. Although, he did say, off the record, that if I could get the sub, Billy Clark, to relocate the air can, that he would send some guys over to correct some of the things they goofed. Of course, I never could get Billy, his HVAC sub, on the phone. I ended up relocating the return air can to the location I had wanted all by myself. Since I proved them wrong by doing it myseld, obviously either Tony or his sub, Billy, were lying to me or they are incompetent. Take your pick. Eventually, to his credit, Tony did send out his guys to correct some of the other stuff that I had been complaining about and he didn't charge me for it either. So, I want him to receive some credit here. He did send his guys out after all and re-did some things they had goofed up and they did do a decent job at it. It is decent of him to have done so after all this. It did take two years of filing complaints though.... If you hire them, it is best for someone to be onsite monitoring the work progress. I didn't have such a luxury. Tony is the only contractor I'm aware of in this area that will do 203K loan work.

Description of Work
It took Darrin 2 months to put together a quote that I could submit to the bank for the 203k loan.

Most of the work that they did was very good and they did it quickly. With the being said they were very sloppy with the painting of the house. There was a swatch of paint on a clock hanging on the wall, paint on the furniture, and a jacket that I own. They were supposed to cover everything up but in the midst of painting they did not do a very good job of covering items in my house.

Description of Work
They did work on my condo after a fire had burned through the condo.

Not Good at all. The contractor came out and evaluated the work to be done. Which included major repairs to the home and a 24 x 16 addition adding up to $105,000. We received a very generic proposal which didn't come close to meeting the banks guidelines. There was absolutely no break down of the work or materials.This was due to Crawford not being able to get a plumber or electrical contractor to the work site so they had to guess at the the plumbing and electrical costs. It took days two days to answer any emails and never returned phone calls. The first consultation was 05/31/13 .......after 5 weeks with no quote (which we desperately needed to give to the bank) I contacted the main office to file a complaint. They promised that someone would call and address the concern. Never happened!!! Terminated services 07/13/13.

Description of Work
After 6 weeks......Nothing

Customer service is extremely responsive, on time, and good quality. They're fair on price.

The Patch Boys of Winston Salem

S and A Painting and Drywall

We install and repair stone, brick, block on residential and commercial. We specialize in stone, building outdoor fireplaces and outdoor living areas.  …

We offer remodeling and construction services for any project needed. Work that we do includes roofing, painting, tiling, stonework, counter tops, cabinets, windows, and flooring (including hardwood, laminate, and carpeting) just to name a few. We also do full or partial kitchen, bathroom, and basement remodels, as well as full home additions and decks. We offer complete smoke, fire, and water damage restoration. We are fully licensed, bonded, and insured, and we are a 203k certified contractor.

Crawford Home Improvements is currently rated 3.6 overall out of 5.

No, Crawford Home Improvements does not offer a senior discount.

No, Crawford Home Improvements does not offer warranties.

Crawford Home Improvements offers the following services: We offer remodeling and construction services for any project needed. Work that we do includes roofing, painting, tiling, stonework, counter tops, cabinets, windows, and flooring (including hardwood, laminate, and carpeting) just to name a few. We also do full or partial kitchen, bathroom, and basement remodels, as well as full home additions and decks. We offer complete smoke, fire, and water damage restoration. We are fully licensed, bonded, and insured, and we are a 203k certified contractor.