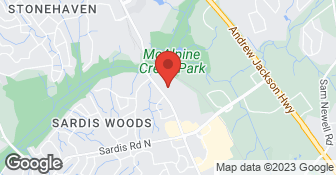 At Window Genie of South Charlotte, we clean windows and a whole lot more! We’re your locally owned, operated and fully insured home service professionals servicing the South Charlotte area including Matthews, Mint Hill, Pineville, Indian Trail, Stallings, Weddington, & surrounding communities. All our technicians have been screened and are badged for your safety and protection. Call us today for a free, no obligation estimate on any of our services; window cleaning, window tinting, pressure washing, and gutter cleaning. You don’t have to rub a lamp, just pick up the phone and put the Genie to work in your home today!...

Very well. They showed up on time, were very friendly and professional and left me with very clean windows.

Description of Work
Outside windows needed to be cleaned

great - they were efficient and friendly as well as a great job.

Everyday they come out is a day I have to take off of work so I can supervise. The first day they showed up an hour late with no phone call. Then, they can't get their pressure washer to start so they said they would have to reschedule. They called the boss and he said they were about 3 weeks out, can we redo it for 3 weeks? I said no, I've got family coming and I need this done. Finally they were able to scramble around and reschedule it for Saturday. So they show up on Saturday and get part of the house washed and he said even though he had been out to see the house, said they didn't realize the house was that big and that they would have to come back. He said, we are currently about three weeks out, can we come back in three weeks? So, they come back like the 21st and they finished the pressure washing and they didn't get all the windows finished. The windows that they did get finished looked like crap. The boss shows up and says they need to come back, can we come back in about a week? In the meantime, I told them I've got these fancy windows that you tilt in. They were supposed to be doing the outside and they said we can't reach that window to re-clean it. So I said you can't tilt them in and out because the one time I did it, I scraped up the window frame. I told them they could take that chance if they wanted to, and they actually did it on one window and it worked out. On the fourth day they finally got things cleaned to the point where I told them to go away, and at that time they have discounted the price to $900. So then, about two weeks ago I was in my laundry room that has cafe curtains up and I said it sounds like a window was open, and sure enough someone had tilted in that window and chewed up the window from and broken the window so it won't close all the way. So that's where we are with the Window Genie. No, I would not use them again in the future.

We definitely did not do the quality work we strive to achieve for Mr. [Member Name Removed]. I was unaware of the broken window until I saw the review which I missed until today. I will reimburse for the window repair.
5.0

The estimate was clear and detailed, and addressed exactly what we wanted done. Communication with the company was extremely helpful and provided useful information. We are very pleased with the job done. Zach, the young man who performed the work, did an excellent job and dealt very well the the challenge presented by the porch area.

Description of Work
All exterior windows washed, including porch area with very high transom and windows which had to be removed to be washed inside and out and re-installed. Also washed gutters.

Thank you. We are glad we were able to meet your needs and look forward to serving you again in the future.
5.0

The first visit was on a rainy day and there was some excess residue left on the siding. I told them about the problem and they agreed to come back another day to fix it. They came back and fixed the issue. They listened and fixed the problem.

Thank you. Our goal is always to get things right. Delighted that we were able to take care of the issue for you.
4.0

They did a good job and I am very satisfied.

Thanks for the review however this work was performed by a different company. It could have been another Window Genie franchise.
5.0

They did fantastic work! The gentlemen were on time, very friendly, and worked very efficiently.

Description of Work
All windows (31 ) were cleaned inside and out.

The team was punctual, friendly, and efficient! Their work was great!

Description of Work
They cleaned all my windows and screens.

Thanks for the review
5.0

I am very pleased! They did really good work & are very professional. They were on time & very efficient. The deal was for $99 however I had some additional work done as well.

Description of Work
They washed my windows.

Thanks for the review
5.0

Description of Work
We had our house washed and driveway, front walk and porch pressure washed.

Thanks for the review

I have been in the Window Cleaning business since 2003 and I take great pride in my work and customer satisfaction! All windows are cleaned by hand. We use squeegees and a window cleaning solution designed for squeegees to ensure streak free results and windows that stay cleaner, longer.  …

Bonded
Insured
All statements concerning insurance, licenses, and bonds are informational only, and are self-reported. Since insurance, licenses and bonds can expire and can be cancelled, homeowners should always check such information for themselves.To find more licensing information for your state, visit our Find Licensing Requirements page.
General Information
Free Estimates
Yes
Eco-Friendly Accreditations
No
Payment Options
Check, Visa, MasterCard, American Express, Discover
Senior Discount
No
Warranties
No

How is Window Genie of South Charlotte overall rated?

Window Genie of South Charlotte is currently rated 4.7 overall out of 5.

What days are Window Genie of South Charlotte open?

What payment options does Window Genie of South Charlotte provide

No, Window Genie of South Charlotte does not offer eco-friendly accreditations.

Does Window Genie of South Charlotte offer a senior discount?

No, Window Genie of South Charlotte does not offer a senior discount.

Are warranties offered by Window Genie of South Charlotte?

No, Window Genie of South Charlotte does not offer warranties.

What services does Window Genie of South Charlotte offer?