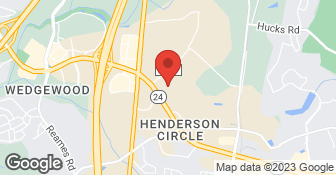 Rhino Shield is a permanent coating for residential, commercial and industrial uses. It comes with a 25 year warranty against chipping, flaking and peeling. It is also energy efficient, a water proofer and resists fading. We make it in 1500 different colors for all different applications. Our typical residential customers have us apply it to their Wood, Hardi plank siding, metal sidings, stucco siding, brick and block exteriors, composite exteriors and vinyl siding exteriors. You will love the look and the longevity of our product as it lasts many, many paint jobs and it has a non prorated transferrable 25 year warranty. Commercially we coat buildings, condominiums, churches, store fronts and many other types of structures....

Job was scheduled but crew did not show up until 2 weeks later. They could speak little to no english and you could not communicate via app because they could not read. It seemed some of the crew was fresh off the caravan from Guatemala. My wife wanted our house grey but since the only way they provided to us to choose a color was a 2 to 3 inch square color sample. What we got was a smurf blue house. Since they were so late in finally showing up I was not able to be there. I had marked of from my part time job but could not keep doing that week after week. When I came home one evening most of our house was already smurf blue. I found out later that only one crew member had worked for Rhino Shield and that was to clean the houses prior to painting. All the small repairs that were promised to be fixed were not done prior to painting. I had to lend them tools to remove an old dish antenna. My wife began to not feel safe when I was not there so I would have signed anything to get them out of our yard. It was a $20,000.00 mistake on our part. But that is a small job compared to other jobs they do. I think that was why we got the fresh of the caravan trainees. It's sad because the idea of ceramic coating is sound but not by these people. Get someone local to paint your house 3 or 4 times over the next 30 to 40 years for the same amount of money. You'll be happier. What is also sad was I had 2 friends that was very interested in getting their house ceramic coated but not after they saw our smurf blue house and the unprofessional way Rhino Shield did business. There was absolutely NO follow up. I guess they knew what they had done by that fact alone.

Customer picked a color, okayed the color, paid for the job in full, signed off on the job saying he was satisfied. Then almost a year later complained about his color choice and lied about many things that took place.

I focus on repaints and new construction homes exterior and interior painting, remodeling homes, know how to stain decks, repaint and repair drywall. I am very committed and dedicated on what I do 100%, very passionate on the work I do and like things done in an orderly manner with enough time given in anticipation, will deliver work on time and expect always to give my all at all jobs. I have more than 20+ years of experiences and been doing this job ever since then. Currently a owner of own company and hope to one day be able to work on your home and give positive and satisfied results.  …

Painting of exterior buildings and houses in North Carolina and 4 counties of South Carolina.

How is Rhino Shield of North Carolina overall rated?

Rhino Shield of North Carolina is currently rated 1 overall out of 5.

What days are Rhino Shield of North Carolina open?

What payment options does Rhino Shield of North Carolina provide

Does Rhino Shield of North Carolina offer a senior discount?

Are warranties offered by Rhino Shield of North Carolina?

What services does Rhino Shield of North Carolina offer?