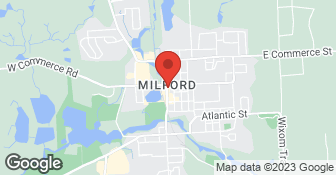 Pet Containment Services specializes in invisible pet fence installation, training and service. Much more cost effective than the national brands, we are a family owned business that wants to make a better life for you and your pet. We take care of every detail from beginning to end in the installation and training process. Call us for a free quote and let us help your pet enjoy the safety and freedom of their yard!...

The repair failed - because we found out the previous installer had barely buried the wire and the neighbor kid's 4-wheeler tore it up. So wire repair turned into full yard re-wire. Everything was still done in an afternoon. He buried the wire a couple inches deeper to keep it safer. He was also able to run wire places the previous installer said was impossible. He then tried to re-use the old base by hooking the new wire loop to it. But again the previous system was junk. So he pulled a new base and collars out of his truck, tested the system, and set the range. Another bonus is the collars are rechargeable so they will not try to keep selling me replacements batteries every 3 months.

We specialize in welding and fabrication services! We guarantee your satisfaction, and we won’t leave until the job is done right. We pride ourselves on the quality work we provide, while delivering great customer service! Check out all the services we offer below and call -or- click to schedule a free estimate today!  …

Pet Containment Services is currently rated 5 overall out of 5.

No, Pet Containment Services does not offer eco-friendly accreditations.

No, Pet Containment Services does not offer a senior discount.

No, Pet Containment Services does not offer warranties.

Are there any services Pet Containment Services does not offer?