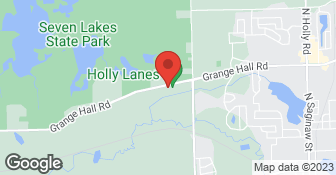 Michigan Bat Control, Inc. has brought a fresh, new approach to the wildlife control industry. We believe in going the extra mile for our customers. There are far too many companies that look to do the bare minimum without regard for the best interests of the customer. Things are different at Michigan Bat Control Inc. We provide the most humane animal control services out there. Our poison free and live exclusion methods are much different than most competitors. We are a family owned and operated company so you can be ensured that when we send a technician to your home you are being serviced by someone that really cares. When hiring any contractor, it is important to know that you are hiring an expert. We devote much of our time to studying bats, birds, and other Michigan wildlife. We do not arrogantly assume that we know it all. We believe there is always more to be learned and we are constantly working to improve our knowledge base....

Our specialty is quality, professional air duct cleaning, and insulation services with the very best equipment in the industry. We use state of the art vacuum trucks specifically made for duct cleaning. These trucks pull an amazing 17,000 cubic feet of air per minute, removing dust, allergens, debris and pet dander from your duct system. We're committed to doing right by our customers. See for yourself and call us today at (248) 349-8877 or visit us online at www.amistee.com!  …

I've always been a "Green Energy" person. I built and live in a underground earth sheltered Dome. Using only solar energy and a fireplace to heat my home in the winter and I don't have an air-conditioning unit. This passion for our environment led me to the insulation business. Makes me feel blessed to save my customers money on their heating and cooling bills. Saving our energy, saves our planet!  …

After receiving news that evidence of bats were found in our attic during a routine home inspection, I contacted Michigan Bat Control, and though I called later in the evening, I was given a consultation appointment for the next day! Joe and his team were professional, knowledgeable, and delivered excellent customer service! The issue was immediately identified and remediated with a high level of attention to detail. MBC also provided a transferable, 5-year warranty. I would and will be recommending MBC to anyone who encounters wildlife invasion issues! Thank you to the entire team for your professionalism and fast service! You made an unpleasant situation so much better!

I did not feel this company wanted my business and was not willing to be transparent about its services I initially called to schedule an appointment to remove a bird's nest inside a soffit in my roof which had baby birds recently born in it. This ask (to remove a nest) was clear to them because they asked to schedule the appointment about 3 weeks into the future, so that the babies would have left the nest; they indicated they were not able to remove it otherwise. But when the technician arrived, the first thing he announced, before reviewing our property, is that he would only be quoting our home, not doing any work. What? We then received a quote to protect other potential soffit risks (9 of them), because we had 1-2 other birds' nests that my family had noted in the preceding few weeks and the technician felt it was appropriate defense for the future. The technician also shared his company would probably not do the work just to remove the nests ($100-150) because of the distance from their headquarters to where I lived. That made my wife feel confused and spoken "down" to, even if that was not the intent. I was not opposed to the additional protective work, but was concerned with the additional cost. The head office admitted the technician should not have said he would only quote the work. He promised to have someone call me back - that call never came in a subsequent week. I then called again. When I asked for pictures of the work quoted, and indicated that seemed to be the agreed-upon ending of the prior conversation, the staffer indicated "We don't do that" and ended the conversation when I said it seemed they didn't want my business. A company that is not willing to provide an example of what it's quoting doesn't allow me to gauge whether the work meets expectations. I feel they wasted my time (and theirs) with their inconsistent communication and changing stories about when they'd do work. Hey guys - your company is in Fenton. There's 5m people in the metro Detroit area. If you want to do business in southeast Michigan, make it reasonable to do so

The quote went fine. However, traveling a great deal there was an item I can't do which is to have them come into my house. I asked if I could have the rest of the services, such as sealing my roof and cracks and a few other tasks which still came to around 400 dollar. I was told it is all or nothing from the quote. Seems like a waste of money but I can go somewhere else.

Description of Work
I paid 100 to have them come out and assess what needs to be done to my home. They were prompt and i got the quote.

[Member Name Removed], Thank you for taking time out to review our services. I hope to help you and others understand our services. We are not an all or nothing company for the extra work. In the wildlife control business it is important to seal and repair all active and potential entrances. If we allow customers to pick and choose what openings to seal there is potential for a new entrance into the home. We back all of our repairs with a five year warranty. It becomes too complicated if we only repair certain things on the home. So if the animals re-enter the home who takes the blame? We don't like any gray area on who fixed what. We have learned from passed experience for this same type of instance. We have had homeowners only want us to install one way doors or traps. We do just that, but then we get a call back because the animals have reentered the home at a new location. We then explain that we can not warranty other entrances and it ends up turning into a big mess. So I guess either way it's a lose lose situation for us.
5.0

The service man and trainee were skilled, punctual, informative and friendly. There is a follow up appt which makes me happy that they are accountable.

Knowledgeable agent assessed our situation and after our acceptance of his quote, made some repairs to areas he felt the bats were entering. He added a one way door in their most obvious path for them to exit. Door was placed in early spring and removed in late spring. Once removed the opening was sealed up. Price seemed a little steep, but they offer a 5 year guarantee that works out to about $15/month to be bat free!

The technician arrived when he promised; was fast, courteous, knowledgable and professional.

Response in timely manner, quick set-up appointment, work done within few days. Work done yesterday. So still need to see if noise in attic at night is gone. But so far so good, Zac came to inspect the attic, found some evidence and estimate the price. Work (sealing and setting an exit) started few days after. Work seems professional and price is reasonable.

The whole experience was excellent. Appointment scheduling was a breeze. Technician was punctual and provided very useful information. Price: excellent!

Not only did he show up over an hour late, he was in tattered clothing. I understand that their job is messy, but he appeared very unprofessional, moreover he walked through my entire house, including carpeted areas without covering his shoes. He did not spend more that five minutes looking for the bat, and despite the claim that he closely inspected the outside of my house, he failed to notice that our garage has a small attic space above it and check the openings there. Additionally, I expressed that I have pets and would need a pet safe option for the mice, and that was not provided. I explained that our pets are members of our family and we can't have options that could harm them and he explained they only use one type of mouse removal method. This cost me $100, which would have been waived if I hired them to do the job, but I clearly was not going to save $100 at the expense of our pets.

Description of Work
A bat got in the house so I called them to look at the house and see what they could do. On the phone I asked if they would take time to look for the bat and remove it and they said of course.

Great! I called their office and within the hour Joe was here. He removed the bat and inspected the chimney. Replaced the hood that was out of place and confirmed that there were no other bats. He was very friendly and professional. I would definitely recommend them.

Description of Work
We had a bat in our fireplace that needed to be removed.