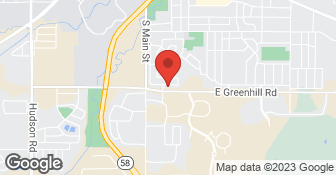 Iconic Renovations is locally owned and operated out of Cedar Rapids, IA. I have over 5 years of quality experience and I know how to get the job done right. We won't leave until you are satisfied! You can trust our specialists with a valuable asset like your home, knowing they will complete your mission in a fast, friendly, and professional manner. Call us or click to schedule a free estimate today.  …

Craig Fairbanks was always honest and upfront from the start of the project. He and the company worked well with us to try and keep the project in budget even under unforeseen occurrences. Craig had very good knowledge throughout all phases of the project from digging the hole to finishing touches and landscape. He was able to stick to the original budget except for extras which we wanted. The prices charged for our extra demands were very reasonable. Since the house did not get finished until the end of December, Craig had to finish up the landscaping the next spring. It did take a while to get the landscaping finished but the grading is great and we've never had water in the basement. We've also had him do work after the house was finished since we do trust his work as a contractor.

Description of Work
Craig Fairbanks helped us work and decide on a design for the first floor and basement. He took the house from concept to finished product, working with us through every step. We also had him come and do a couple landscaping projects a couple years after the house was complete. I rated the price just good because everyone wants more for less and I'm very stingy with money.

Could not have gone better

Description of Work
My wife and I will soon move into our new Fairbanks Built home. This journey has been a wonderful experience-mainly because of Craig and his team. Since we are retired we have been able to spend a considerable amount of time at the site getting to know Craig and the very talented, creative, dedicated, and friendly professionals that make up Fairbanks Builders. They stayed on budget and when they had an idea that might exceed budget-they checked with us first. The quality of the product is very re-assuring. My wife and I almost feel like a part of the Fairbanks family. I am a fanatic when it comes to quality customer service. The Fairbanks team has that in spades which made this experience so enjoyable. I've been told by some that building a new house can be extremely pressure filled. Not with Fairbanks Builders!. High quality, extremely creative professionals, attention to detail, talented and commitment to customer service. That describes Fairbanks Builders!