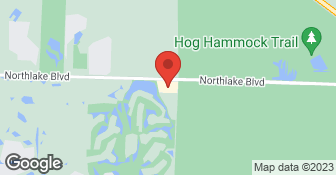 Very disappointing (see last review). My Florida room wood siding 5-6 inches was left exposed when cement tiles were removed and replaced with flat shingles. As a result of being exposed to the elements due to inadequate fascia the wood began to rot, resulting in a leak in my F.R. I had a contractor over today for several projects, and he stated clearly that the roof job was not completed by leaving three sides of the home with inadequate fascia. These three sides were exposed directly to the rain. Installment was in January 2019.

Amid Hurricanes and Covid t went as well as could be hoped. George Came on time for estimate and work proceeded as he predicted with permits and HOA all dealt with. Only real delay was waiting for tile, but roof was water proofed quickly after old tile removed. Got good recommendations for ancillary activities. Result is a beautiful new roof which several. Office staff helpful. Price was within range of other estimates, with all contingencies spelled out in advance.

They were done in just about a month. They did a quality job. They do the roof the old fashion way, tar mop. Good workmanship. I was very happy with them. They were incredible. I wouldn't get anyone else. The owner is George, I have talked to him several times. He worked with me and not against me. I would recommend him to my best friend, no problem.

Description of Work
a new roof

Thank you so much for your business. Please let us know us know if you can help you in the future.
5.0

he called immediately and was in the area and came and gave his estimate. I thought he was a bit high but this was an emergency. He was a pro, did an excellent job the very next day,and I will use him again. I have several homes in this area. Bill Sheehan

Description of Work
Determined to be leakyAC.

Thank you Mrs. [Member Name Removed]! I appreciate your kind words. I try to do good every time. Thanks again!
4.0

I used Elite in 2013 to replace my ex's roof and was very happy with their work. George, the owner, made 1-2 visits during the week to check on the crew and progress. In 2018 I hired Elite for a similar job on my own residence, expecting the same professionalism and attention to detail. I called George, the owner to recommend repair or replacement. We agreed that the condition was too far gone for reliable repair, and I decided to replace. I was satisfied with the estimate, sent in the deposit, and the crew arrived in early January. I had concerns from the moment they scraped off the old roof: 1) No measures were taken to protect the backyard, AC unit, and front of the house from debris. All that was done was brief walk around the back with a wheelbarrow to pick up the larger pieces; I don't know how many nails and screws remain in the sand where my grandson plays. 2) The Florida room and garage were not protected from the sandy particles of the old roof; both look covered in volcanic ash. The toys, dog dishes, and toolboxes were affected. 3) Nails and screws in the driveway were pushed to the side by the blower, where the wind could blow them back under my tires. I took pictures, emailed them to the office, called the staff. They informed me the crew should have used a rolling magnet. Upon mentioning my concern to the crew the next day, their response was a flippant "Oh really?" and left it there. 4) The last straw. The crew completed the roof after dark sometime before 9pm on January 11. The next day (not to my surprise) I noted the fascia wood along the front of the house was rotten, cracked, and patched up by smaller pieces here and there. It was most disappointing. After taking pictures and sending them in I was called by George to inform me that he would make the necessary repairs. He was concerned, quick, and a crew of TWO MEN did what should have been done originally. Nevertheless, the condition of my Florida Room, garage, backyard, and front sidewalk (more nails, screws and a bottle cap(?) is not what I expected. The enjoyment of a new roof was tempered by concerns about what else I had missed, not being knowledgeable of these construction matters. I will be more reassured after the results of the storm season.

Elite Roofing is very easy to work with. They show up when they say they will show up, they call when they are on their way and they do good work. I highly recommend them.

This company is no longer reliable or dependable, at least as far as I am concerned, and based on my recent awful experiences, with them. In the past, they did great work, but not any more. I had George, the owner, look at a roof leak in my garage about one month ago. He said to watch it and if it got worse to call him. It is much worse. There is significant water damage. I called George today, and he said he was too busy to help. I have lost all faith in this company. I would never hire Elite Roofing, again. This new leak, is in addition to numerous other problems, with a recent repairs that were very poorly done, and took multiple attempts to correct, and ultimately repair correctly! They used to be good, but not any more! Thus, my one star rating! I advise getting another roofing company!

never heard from them about a request for a quote...guess they don't need any business right now

We are a family owned and operated property restoration company in SFL. We rehabilitate properties after disasters from storms/hurricanes to pre loss conditions. Apart from our core buisness we offer professional and affordable pressure washing services. We are licensed and insured.  …

*All work supervised by Gary Rosen PhD Biochemistry/Molecular Biology (UCLA). *We do not use any hazardous chemicals that leave a chemical residue. We are a green, chemical free company. *State licensed building contractor with a specialty in mold and water damage. Florida state licensed mold contractor. Building contractor's insurance PLUS mold/environmental professional liability insurance. *Mold Assessment for Mold Sensitive People (combination of testing and inspection to find what air testing alone cannot find). * Non-emergency sewage and bio-cleanup. *Most mold/water damage jobs involving a few areas can be completed in 1-2 days including remediation and drywall build back. **Free Estimates for Homeowners Only.  …

Storm recovery, water-flood damage restoration, mold remediation, roof tarp application, leaks, catastrophe, we handle it all, we make it easy recovery-get you back to life, simply bill it to your insurance company. corona virus disinfection and mitigation services licensed and insured We are License, insurance Bonded and Certified Firm. Our primely goal is to treat your property as if it ours. Water Floods Restoration LLC the “Disaster Recovery Systems” provides a high quality residential and commercial water, flood, fire, mold, odor, bio-hazard damage mitigation and repair as well as natural catastrophes recovery services. We provide water extraction, dry out, mold remediation, as well as reconstruction and Roof tarp services. We can bill the work to your insurance company. We understand the emotional turmoil that water damage, flooding, fungus mildew mold spores or fire and smoke damage can cause, therefore, we treat each customer and their property as if it were our own. We take great pride in our attention to health and safety, using state of the art tools and equipment to fully restore your home or place of business to the highest standards.  …

How is Elite Roofing overall rated?

Elite Roofing is currently rated 4.8 overall out of 5.

What days are Elite Roofing open?

No, Elite Roofing does not offer a senior discount.

Are warranties offered by Elite Roofing?

No, Elite Roofing does not offer warranties.

What services does Elite Roofing offer?

Are there any services Elite Roofing does not offer?