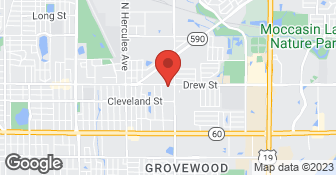 We go above and beyond the average roofer!...

Apparently this owner has closed this company and started up again under the name E-Star Roofing. Problems with my roof were never resolved by the original company.

Above Average was hired by my contractor. I've been told he no longer uses the company. They did a complete reroof on my house. Time will tell if it will leak, but I'm holding my breath because of the other problems they caused. While doing their work, they damaged a metal overhang between the floor they were roofing and my back porch. Instead of carefully lifting the metal so they could simply put it back in place, they tore it up and left it sticking in the air, leaving a 4' gap leaking between the roofs. The contractor had them come back several times to repair it, but whatever they did left it still leaking. Another roofer had to be sent to do it properly. They damaged the fascia along the entire side of the house and left it buckled and wavy. I was told they were not responsible to fix it because there was no wood underneath, and they had to lean their ladders against it to access the roof. My question was: why didn't they tell me or the contractor if there was a problem, so it could have been remedied. Instead they let the damage happen and left it that way. Besides, it is a low, one-story roof. They could have just used a step ladder to avoid the damage. The yard was also left littered with all the paint they chipped off the fascia. They installed a drip edge, which is totally ineffective in one area. Water runs down the buckled fascia and under the soffit. No one has come to repair that either. It's been 4 months, and I'm still battling with the contractor to make it right! This has been an ongoing horrible experience. I can only recommend that homeowners NOT consider them.

Description of Work
They replaced our asphalt shingle roof. Their pricing was competitive.

Description of Work
Good quality job at a very competitive price. I have recommended Above Average to others

There is interior ceiling damage as a result of the leaking roof that they need to repair. I have reached out several times to get this repair and they have refused contact with me. There was a 10 year warranty on this project that's still in effect. Update: As of October, 2014, the roof is leaking again. Scott Cole will not return my phone calls. I have been to his place of business, twice, to ask that he contact me regarding the roof. He will not do so.

Description of Work
They replaced a whole roof for me.

We had a leak in the roof after it was first completed, but it was repaired in a timely manner. Over a period of time, we had multiple leaks - then we found out there were holes in our membrane roof that were cut by the solar panel company. At this time, our comapny is not taking responsibility for any roof issues related to the solar panel installation.

Cleaning services that produce high-quality results! Here at Complete Softwash Solutions LLC. We pride ourselves on our customers satisfaction. From roofs to sidewalks we do it all, including paver resealing. We also offer a 10% discount for all military and first responders. We also beat all written quotes! Call today so we can clean you up!  …

How is Above Average Roofing Inc overall rated?

Above Average Roofing Inc is currently rated 3.4 overall out of 5.

What days are Above Average Roofing Inc open?

Above Average Roofing Inc is open:

What payment options does Above Average Roofing Inc provide

No, Above Average Roofing Inc does not offer eco-friendly accreditations.

Are warranties offered by Above Average Roofing Inc?

What services does Above Average Roofing Inc offer?