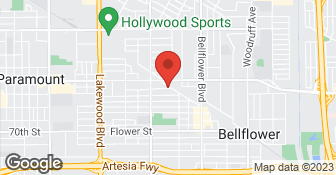 We are a small, but growing, company with 12 years of experience in the pest control field. We offer 24 hour 7 days a week availability and reasonable rates. We are Licensed, Insured and Bonded for Termite work as well as Pest Control services....

The sole proprietor responded to the initial phone call, came to the home, examined the area from the outside, then sprayed what is assumed to be a pesticide into the crevice. Charged $200, promised that an invoice would be prepared once he returned to his office and he would either print it or send it e-mail. The bees then found a way through to the inside of the house (into a bathroom) and were increasing in number. The bathroom door had to be kept closed and a towel stuffed under the door to keep the live ones from getting into the rest of the house. The proprietor was called again, and said he would return in a short time. Time went by and he didn't show up. Called again and he said he got delayed and he was heading here. Didn't show up. Finally showed up late in the day, almost dark, sprayed again. Did not solve the problem. Called several times to get him back, and he kept saying he would come by but never came again. Never received an invoice, either. Had to call another provider, paid $600 for their service, which included taking off a portion of the roof, removing 45 pounds of honeycomb, opening a ceiling inside the house, and making all the repairs after the bees and etc. were removed. If BIO CON Pest Control did not have the expertise to provide bee service, the he should NOT have represented himself as being capable of doing so. A simple, "Sorry, I can't provide this service, but if you need other types of pest control, please consult with me and I'll try to meet your needs another time," would surely suffice. Luckily, American Express (credit card) refunded my money since the service was misrepresented and absolutely not effective, nor completed.

Description of Work
Bees were entering and exiting under an area in the eaves near a dormer-type area on the first floor of the home.

Description of Work
I needed ants to be sprayed.

Description of Work
I have had a yard full of wasps for about 3 years. I couldn't get anyone to come and take care of these ground wasps. My dogs and cat were being tortured daily. I finally got in touch with Bio Con, he knew right away what I had and came out within 2 hours. I am so happy I called him. He sprayed an animal friendly spray and the wasps were gone within an hour. He is my "Hero". I will use him again!! |

I had thousands of wasps in my large lawn, just flying around the ground. I had called several Bee people and no one wanted to come out and look at the problem. The wasps had started annoying my dogs and cat because of the numbers of them. I eventually had to take my dog to the emergency room because he got stung in the mouth. I finally got in touch with Bio Con. The tech knew exactly what I had and came to my house promptly. He sprayed the front and back yards with an eco friendly spray and told me I only had to keep my pets inside for about 15 min. I can't believe it!! I have been dodging these wasps for over 3 years, I am so happy, Bio Con is my Hero!! I will use them again. It is so nice to go in my back yard with no wasps.

Description of Work
Rid my lawn of wasps

The inspector arrived promptly, was thorough, pointed out mites and gave me a detailed explanation of what was needed. He promised to send the report by email that same day. no report received. I have called them 5 times. Two of those times I got voice mail with no option to leave a message. The other times they promised to look into the problem immediately. To date I have not received a report. i felt he would have done a professional job and am very disappointed at the lack of followup.

Description of Work
They came to my house to spray for roaches, and with two appointments those roaches were gone, and I haven't seen one since.

Our company branches out to conduct Los Angeles Water Damage Repairs, Los Angeles Leak Detection, Waterproofing in Los Angeles, and Los Angeles Mold Removal. Compared to our other competitors, our Los Angeles Water Damage Repair services include maintenance programs, micro certified technicians, free services call with repair, extended warranty and guarantee, and 100% money back satisfaction guarantee. In addition, we have 35 years plus of experience in the industry, are a leading service provider from Angie's List, and Southern California Quality Installation and Maintenance Programs. Our Los Angeles Mold Experts are crossed trained in Thermography using FLIR cameras. Our mold removal technicians are certified in: Water Intrusion, Los Angeles Leak Detection's, Investigations, Thermography, Infrared Cameras, Water Damage Repairs, Los Angeles Mold Removal, Waterproofing in Los Angeles, and Weatherproofing. We understand the importance of having the best technology for your inspection, and an infrared thermal imaging camera will examine your windows, roofs, decks, stucco, concrete, basements and etc. Here at Absolute Maintenance and Consulting, we like to fix the problem and leave your home better than they were when we found it. We'll repair your property in a matter of days, making sure your home is outfitted with the protection and safety you and your family deserve. We've literally never met a problem we couldn't solve. When there's a problem in your home, we understand you need it fixed. We not only investigate and resolve the issue at hand, but we execute the matter of contention with confidence and assurance in illuminating our promise for our customers because they always come first. Please call us for details on our minimum job cost, the scope of work, the areas in which we are currently working, and how this applies to you. Our results are guaranteed, or you don't pay. To set up an inspection, please call 310-846-8213, and we only work for homeowners/owners.  …

Alpha Structural, Inc. has over 400 years of combined technical experience in Foundation and Hillside Repair. All of our experience is hard-core and down-in-the-trenches – not managed from behind a computer. Our in-house engineers and technicians are among the most experienced in all of Southern California. Alpha Structural, Inc. is the ONLY company in the Los Angeles area licensed to ENGINEER and BUILD any type of repair project. That means that you'll work with us through the whole project, not unknown sub-contractors that you didn't hire and cannot control or predict. Alpha Structural, Inc. a licensed, bonded and insured contractor (license # 663409). We are licensed with the following classifications: A (General Engineering Contractor). B (General Building Contractor). C-8 (Concrete). HIC (Home Improvement Contractor). CALL US NOW FOR AN INSPECTION OR ESTIMATE! (323)258-5482.  …

We are one stop shop for all of your insulation needs. The President and Founder of Elite Thermal is a 2nd generation Insulation specialist with 20 years of experience hailing from a bloodline with over 45+ years of experience/ownership in the Insulation business. We are a tight knit family business building a new Insulation business here in the Los Angeles area. We promise to bring integrity, honesty and full transparency from initial consultation to final job walk thru. Our motive is to offer ELITE service and quality install while always being attentive to our customers interests and needs :)  …

Bio Con Pest Control offers a variety of services to take care of your pest control needs.We can rid you of Bees and ants, roaches and rodents, Beetles, bed bugs, birds and gophers, or anything that is "bugging" you. Bio Con Pest Control can also set up pest control services to prevent the pests in the first place. We also specialize in Vapor Barriers for problems with moisture and Termite Inspection and fumigation for escrow or non escrow properties.

Bio Con Pest Control is currently rated 4.1 overall out of 5.

No, Bio Con Pest Control does not offer eco-friendly accreditations.

No, Bio Con Pest Control does not offer a senior discount.