Kitchen Updates: From 1970s to Now

Kitchen remodels still offer the best return on investment when it comes to the value of your house. Check out how these 1970s kitchens were transformed.

At one point in time, everyone’s kitchen sparkled with geometric wallpaper prints and avocado-green stoves. The refrigerators were full of Kool-Aid, pudding pops and Salisbury steak, and there may or may not have been a microwave on the counter.

Well, times have changed. But if you’re still cooking in a room that’s a little bit old-school, check out how these three Angie’s List members remodeled their Brady Bunch kitchens into one fit for a Modern Family.

It was his wife’s birthday and Jimmy Leung surprised her by getting a new, stainless steel refrigerator for their 1969-ish kitchen in Hudson, New York. “Once we got it in there and saw what a difference it made, we knew what we had to do,” he says.

Ready to rid themselves of the dated wood cabinets and brown-colored space, Leung says he turned to Angie’s List and found highly rated JR Laminators of White Plains, New York. “I don’t think anything had been updated,” Leung says. “When we pulled everything out, the insulation dated back to the ‘60s.”

Leung says he appreciated the effort company owner Jeff Rodgers put forth in making custom cabinets for the kitchen. “He did offer to use a manufacturer, but he did an amazing job,” Leung says. “Nothing looks cheap or flimsy.”

The final cost of the remodel was around $10,000, including countertops, cabinets and materials. “The 1969 look is gone and everyone’s been amazed!” says Leung, who encourages others to read the reviews carefully before hiring. “I wouldn’t have found JR Laminators without Angie’s List.”

Little House on the Prairie

Camilla Walton had the funds, and knew it was time to completely remodel her nearly 40-year-old kitchen in Lenexa, Kansas. “In the ‘90s, I put up wallpaper, painted the cabinets white and replaced the countertops with new laminate,” she says. “But that was it.”

Walton says she spent weeks looking at kitchens in magazines and online before researching remodeling companies on Angie’s List. “Take the time to decide what you really want, which is hard, I know,” she says. “Check out the people and the products before you hire.”

Enter highly rated Mission Kitchen & Bath of Mission, Kansas. “I felt very comfortable with them, and everyone who worked with me on my project seemed top-notch,” Walton says, adding that it was beneficial to work with a company that had an in-house designer. “I probably never would’ve added the new wall of cabinets,” she says. “I didn’t think there was room!”

Walton’s new kitchen came in a bit over budget at $24,300 (thanks to the LED under-cabinet lighting and new garbage disposal), but she says it was worth it. “I love the new finishes and the added cabinets, but surprisingly the best thing has been the much-larger kitchen sink,” she says. “One side is large enough for my 9-by-13 Pyrex casserole to lay flat. Everything’s gorgeous!”

All in the Family

“My parents originally purchased the house in 1977; back then, you could never have too much wood paneling,” says Jonathan Religioso of Jersey City, New Jersey. “With the house now being mine, it was time to start taking down the old wood paneling and popcorn ceilings.”

Who better to take on such a task than highly rated Lucky Three in Little Falls, New Jersey. “I chose quality and people who I felt were honest and professional,” he says.

When work began, Religioso says the electrical was fine, but parts of the plumbing had to be updated among other things. “The ceiling needed to be reframed since it wasn’t level, and the floor joists were discovered to be rotten on the ends,” he says, adding that the whole project including cabinets, appliances and countertop added up to approximately $25,000.

“But I tell my friends and co-workers that if they’re in my house and there’s an earthquake, run to my kitchen. That’s the most solid and safest place right now.”

Religioso says he loves everything about the new space, but is most excited for the stainless steel hood that exhausts directly to the outside. “My parents are welcome to visit from Florida and fry fish anytime in my kitchen,” he says. “I won’t complain anymore.” 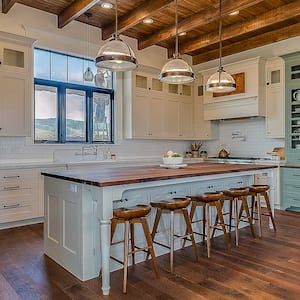 Here’s How Much Your Kitchen Remodel Will Cost