How Much Does It Cost to Install Surround Sound?

On average, homeowners pay $665 to install a surround sound system

Surround sound can take your home theater system to the next level. Originally designed for movie theaters, a surround sound system feeds an audio track through multiple channels that play out of a set of speakers arranged throughout a space. This system makes you feel like you’re right in the middle of the action, whether you’re catching the big game, watching the terrifying climax of a slasher film through your fingers, or leveling up on a video game with your online friends.

How much, though, will it cost you to install a surround sound system in your home? Typically, homeowners pay between $245 and $1,120, or an average of $665, to add surround sound to a media room. However, there is a lot of variation between affordable and luxury components and the choice between tweaking an existing speaker set-up or purchasing a full surround sound kit as an essential part of your new media room.

How Much Does It Cost to Install Surround Sound per Unit?

You can add surround sound to your home in many different formats. True surround sound comes in two different configurations. Most common in home theaters is 5.1 surround, which features six audio channels and requires five speakers plus a subwoofer. On the other hand, 7.1 surround, which adds two additional channels and two more speakers, is mostly found in large cinemas, though home systems are available. 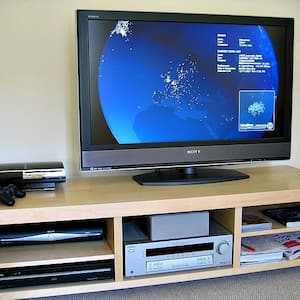 How to Install a Surround Sound Setup

Do you want a thumping home entertainment system? Start with a DIY installation of your surround sound setup.

What Kind of Surround Sound Set-Up Can I Get on My Budget?

There is a wide range of potential surround sound configurations you can choose from, depending on your budget.

The lowest end of the average cost range is unlikely to get you a full surround sound system from scratch, but for $300, you can take your existing audio set-up from mundane to spectacular 5.1 surround sound.

Let’s say you’ve already got two front-facing speakers and a subwoofer running through a dual-receiver amplifier. If you stick with less expensive speaker models, start by adding a set of in-ceiling speakers for $200, including all the hardware. You’ll need to add one more speaker to the front to accommodate all six channels, which will add $50 if you stick to a more affordable model. Another $40 will get you the brackets required to mount the speakers in a configuration suited to the room.

A budget of $700 can bring 5.1 surround sound to your home, even if you don’t already have any of the components you’ll need. Budget $300 to $450 for a set of five speakers and a subwoofer of modest quality. An adequate receiver will run an additional $200. Set aside $40 for brackets to mount the rear speakers.

If you’ve opted for higher-end speakers, you’ll have to handle the installation yourself, but if you’ve purchased less expensive models, you would still have $150 for a two-hour professional install.

If you’ve got $1,000 to bring your surround sound dreams to life, you might choose between a higher-end 5.1 surround set-up or a more modest version of 7.1 surround.

If your media room is on the smaller side, you’ll get the most bang for your buck on the higher-end 5.1 surround set-up. If the highest quality sound is your priority, opt for a mounted set-up, and budget $300 for an amplifier, $200 for the receiver, $450 for speakers, and $50 for brackets. If, on the other hand, a clean-looking, integrated set-up is most important, you might spend $210 for the in-wall wiring, $180 for the back boxes that will keep the equipment in place behind your walls, with a remaining $610 for the receiver and speakers.

If your room is large enough to physically accommodate seven speakers and a subwoofer while leaving enough space so that the sound is not overwhelming, you might consider a modest 7.1 surround sound system. A dual receiver amplifier will cost $400, and you’ll need to spend at least $50 for all the brackets you will need. That leaves $550 for a set of seven inexpensive speakers plus a subwoofer.

If you’re planning to spend $4,000, your best bet will be to spring for a high-end, out-of-the-box surround sound system. The package will include a central console, all the audio components and hardware you need for sparkling 5.1 surround sound, and instructions that make DIY installation a breeze.

Alternatively, if your priority is adding surround sound throughout your house, you could opt for less pricey components and use that $4,000 outfit at least five rooms with enveloping surround sound.

With $6,000 to spend and a large enough space, you could install a top-quality 7.1 surround sound system in one glorious media room. You’ll want to budget $4,000 for a set of seven high-end speakers plus a subwoofer, $1,000 for a high-performing receiver amplifier, and another $1,000 for the brackets and back boxes that can give you a sleek, integrated speaker installation.

Immerse Yourself in the Sound: How to Choose the Best Surround Sound Speakers for You

How Much Does It Cost to Install Surround Sound Yourself?

Hiring a local surround sound installer will typically cost between $100 and $500. Installers charge an average of $50 to $100 per hour. If they’re just installing and connecting mounted speakers, the job shouldn’t take more than two hours. If they’re putting in a full new system with integrated speakers and running wires through the walls, it can go up to five hours. You can knock that amount off your estimate if you plan to install it yourself.

You can typically install an out-of-the-box home theater system without much difficulty. If, however, you’re designing your own set-up and would like guidance on speaker placement—or especially if you’d like to hide the wires behind your walls—it may be worth calling in the pros.

What Factors Influence the Cost to Install Surround Sound?

Your decisions about some crucial variables will affect the final cost of your surround sound system.

Surround sound systems are designed to function properly within one room, not multiple rooms. If you want to add surround sound to your whole home, rather than just a media room, you can expect to pay between $500 and $1,000 per room.

Many newer surround sound systems function with wireless connectivity, but if you’re buying an older or higher-end model with wiring and you wish to conceal them from view, expect to pay an additional $35 to $75 per wire.

As with any speaker installation, you’ll face the choice between mounting them on brackets, shelves, or the ceiling or using cutouts in the walls to keep them out of sight. The latter option, integrated speakers, will add between $20 and $30 per cutout.

Is a soundbar the same thing as surround sound?

Is surround sound worth the money?

For movies, television, and games that feature surround sound output, no other set-up than true 5.1 or 7.1 surround is capable of matching the fidelity and presence they offer. If, however, music is your audio priority—or you tend to favor older movies and broadcast television unlikely to include surround sound output—you might be better off putting your money towards two high-quality speakers designed to reproduce stereo sound. 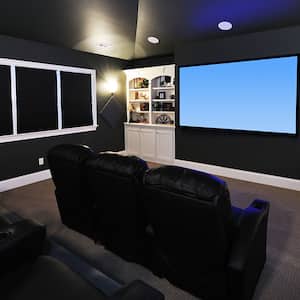 How Much Does It Cost to Soundproof a Room?