Are 4K TVs Worth the Upgrade?

Ultra high-definition sets, or more commonly known as 4K TVs, have significantly dropped in price over the last decade, to the point where their resolutions are becoming the standard for TVs—with 8K TVs slowly popping up. So this poses the question: Are 4K TVs worth the cost, and what are the pros and cons of upgrading? Those questions are relatively open-ended, as more upgrades are coming to this resolution every year.

When looking for resolution sizes, you’ll see quite a bit of different terminology thrown out there, which can get confusing. For instance, 4K means UHD, and 720p refers to HD. Generally, the number of pixels present in different monitor resolutions are:

With every jump in resolution, you’re gaining four times the number of pixels compared to the previous generation of high-definition. While this means you have increased resolution, this doesn’t always correlate with an increase in color or brightness. Remember that a jump to 4K doesn’t necessarily mean an actual upgrade.

Whether you have an HD or FHD television, you’re going to immediately tell the difference in the sharpness of any piece of media you watch when you upgrade to a 4K set. Even if it’s an older film or TV show, colors tend to pop out on the screen and generally work better with film because 4K TVs tend to stay within a specific size range.

As mentioned above, if you’re coming from a previous generation of high-definition such as FHD, you’re going to see an increase of around four times the resolution size. This generally makes whatever appears on your screen sharper or less blurry.

With more pixels comes the option to handle more colors throughout the screen. You may notice a difference in how a screen delivers colors and want to go back and rewatch some of your favorite movies to see new colors and less blur.

Deals With Downscaling Media at a Better Rate

When you’re watching a movie or TV show, there’s a good chance it was filmed at a 4K resolution or higher. In fact, most media stations and companies are switching to filming at 8K and above, thanks to advancements in video capturing.

Because of the use of high-resolution cameras, it’s easier to downscale the video to fit a 4K resolution on the screen, allowing the piece of media to retain a lot—if not all—of the original details. If a movie is shot at 8K and tries to display on an FHD TV screen, then it’ll need to downscale 16 times to fit on your screen properly.

With a high resolution comes the ability to increase screen size without losing quality. Nowadays, it’s common to find TVs at upwards of 85 inches or more.

As more companies make 4K their standard for TV production, you’ll find many more brands at your local electronics store than in previous years. A more extensive variety in brands typically comes with more competitive pricing and special features, such as smaller bezels (the frame around the screen). What was once considered the top of the line has slowly turned into what everyone expects.

Though it doesn’t necessarily mean that a 4K TV is the gold standard, it means there’s a minimum to the screen size available. You’re likely to pay a higher upfront cost than buying a TV that only offers FHD.

Because of larger screen sizes, the starting price for many 4K TVs is around $280 for a 43-inch option compared to an FHD TV, which starts at about $150 for 32 inches.

This also raises a concern for those who are working with limited space. You may only have room for a 32-inch TV in your bedroom, in which case you have no option but to go for an FHD.

While 4K is the standard for most TV and movie footage today, this doesn’t mean it was always the case. Old video recordings or media that hasn’t been remastered for 4K will tend to look worse than on a 1080p FHD resolution TV. However, technologies are in the works to let artificial intelligence improve the upscaling process. 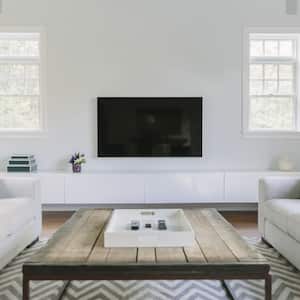 How Much Does It Cost to Mount a TV?

Mounting a TV typically costs about $250

Types of 4K TVs On the Market

You’re going to need a quick brief of all the different types of 4K types on the market. You’ll see terms that range from LED, OLED 4K TVs, QLED, Smart TVs, 60Hz, and 120Hz, all with different implications.

LED stands for light-emitting diode and produces light when electricity passes through the diode. These LEDs work as the backlight for the actual screen, which is what you’ll find commonly referred to as LCD. LCD stands for liquid-crystal display.

Organic light-emitting diode (OLED) TVs work similar to LED TVs, just minus the LCD screen. Instead, the diodes work with the display and create a clear and sharp image with much deeper colors than what a standard LED TV offers. This allows for a thinner TV.

QLED (quantum dot light emitting diodes) is more similar to LED TVs than OLED TVs. Like LED TVs, QLED television sets utilize an LED backlight but at a much tinier scale, allowing for better color accuracy. Since this tech still uses a backlight with an LCD screen, you’re still likely to notice the color black looking closer to gray, unlike OLED, which tends to produce a true black color.

With the world of automation and smart technology evolving rapidly, TVs are also taking the leap into the smart space. They often allow you to access streaming services, even letting you stream from your smart devices to the TV, and even browse the web without needing any extra devices.

If you have the wall size and budget for a 4K TV, it’s worth the upgrade so long as you go for a quality option. Going for the lowest-end 4K TV may net a better resolution compared to an HD or FHD TV, but if your previous TV has better color contrast and brightness, you may want to hold off.