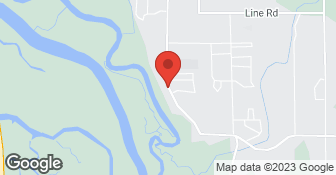 Shay Barber CFO & Founder A roofer by trade; Shay has an extensive and impressive background in both commercial and residential roofing. Since the early 2000’s, he’s been a proud owner and Field Manger of 1st Choice Home Construction. As a kind hearted leader he continues to contribute to our community year in and year out, by providing roofing to the many family’s in the Pacific North West. He’s a prime example of what great leaders do for their company and community. Highly respected by his employees, contractors and vendors; Shay understands that the work of all contractors are not created equally and is not afraid to roll up his sleeves when help is needed by non-certified installers. He is certified through major manufactures and the company is a 100% full-service roofing business. Shay is awarded as a top rated service, elite service, and a BBB Rating of A+. Lets us provide you with unprecedented roofing and carpentry skills, all while saving you money. That is what we strive to do for our clients!...

Original appointment was for Friday afternoon, Received a call saying they were running behind and asked if they could come Saturday Morning. They no showed on Saturday. No phone call saying they couldn't make it, just decided to waste my time.

I really enjoyed working with Shay and his team! The work was a smaller job, so I was nervous about hiring a large company, so was happy to find 1st Choice Home Construction, which is a small family business. The job was done quickly and effectively. I also really appreciated that when I first called and made an initial appointment for an estimate, it was not a 4 hour/6 hour window. Shay told me he would be at my house at noon, and was at my house at noon! A great time saver.

It was my pleasure, and you were so awesome to work for 😁
5.0

Very friendly, quick, and professional. Manuel left the worksite clean each day. We've since had a home inspector visit our home in preparation for selling and he commented on the excellent job that was done!

Great. Shay was very quick to respond, easy to communicate with and I got exactly what I wanted in the timeframe I needed.

Shay and his team did a really good job. We needed to replace our skylight before we sold our house. They were efficient, affordable, and professional. I normally do not write reviews, but I was super impressed with my service! They also cleaned our roof and made sure it was in top shape!

The leak went away, and after weeks of rain, we are convinced that the work was performed professionally! Thanks Shay!

They were very timely and efficient. Extremely helpful and professional- they cleaned my gutters and replaced my screens did some Caulking & paint touch-ups on a very large roof.

Description of Work
Gutters were severely clogged and needed cleaning and repair.

He did an awesome job!

Thank you 1st Choice, for understanding my last minute roofing emergency! This company made themselves available in the moment I needed someone the most, experiencing immediate leaking which put a third of my home at risk of extensive water damage if left untreated at that moment. Not only did they have someone come out same day to evaluate the damage, but they were also very friendly and professional throughout every interaction. My initial call was placed shortly outside of most anyone's business hours, yet they were more than accommodating to take care of my needs right away. In the end, they came up with a cost-efficient solution and I no longer have to worry! I am now in the process of scheduling them to replace my entire roof in the coming months, and also considering having them handle a few other needed renovations to my home as well. A great company and resource to have--highly recommended!

Called on 3/20/2018 to have water removed from a sky light and have it fixed. Was quoted $450 to have the sky light repaired. Shay (I think was his name) arrived with a new hire guy that he was training. Was nice at first. Led them to the back of the house to give them access to the roof. Went inside because I was watching my two year old daughter with me and could not be outside to watch them fix the issue. They were up there for less than 30 minutes. I asked why there was still water in between the panes of glass. Said that it would evaporate (I don't know how that works, but whatever). Then a dared to ask if the simple re-caulking fix would still be $450. He said yes, it is the standard roof repair fix. Stripping old caulking and adding new caulking = $450. He decided to get upset because I told him that the price was outrageous and he didn't even remove the water in between the panes. I was told that he had never been so disrespected in his life before. He said that I never mentioned removing water from the sky light. Which I specifically did over the phone. Why else would I call? He was venting and yelling his frustration outside my house and causing a scene in front of the neighbors. Getting real close to my personal space I had the feeling of him intimidating me (he is over 6 feet tall, me 5' 7"). After a few minutes he decided to leave. Less than 3 minutes later he drove back to my cul de sac. He parked two houses down and came to my open garage to now threaten me with putting a lien on the house. I told him I would pay, but not $450 for caulking. The threats continued and was again beginning to raise his voice, yell, and use his hands in exaggerated manner to show that he was not to be messed with. Really bad customer service and etiquette. He kept trying to tell me that he wasn't to be messed with. One thing he said was "Homie don't play that." Also: "I knew from the time I arrived that you weren't going to pay," what does that mean? Because I'm Hispanic he assumed I was poor or some other stereotypical thing. By this time my two older sons arrived home from school being dropped off by my sister in law (I couldn't pick them up because I wanted to be at home for the repair). I asked him to lower his tone in the presence of my boys. He finally did, but not happily. He said that he would take $250 and wouldn't put a lien on the house. At this point I had enough of him being there and decided to give into the threats because I know nothing on how liens work. Went inside to write a check so I could get him the **** out of there. After giving him the check he told me that he doesn't want to here from me ever again or he will put a lien on the house (didn't receive a receipt). I can't confirm what he did to the skylight (I have cut on my foot that wont allow me to do any kind of weight bearing work). So, if the skylight got worse or I had questions regarding the guarantee he would automatically put a lien. He didn't say anything about me not being able to post to Yelp. Some of his actions were captured on my home security cameras. At one point when I went inside he noticed one of the cameras and changed his demeanor. I wouldn't waste my time writing this if I didn't feel that others need to be warned of the low quality of work and a despicable bed side manner. I served in the U.S. Navy for 8 years and hold others to a high standard of discipline, respect, and integrity. None of those values were exemplified by this company. The worst part is that I can't complain to anyone at this company because he is co-owner, no one above to help me. Again, if you want someone to come out and place $450 caulking on a sky light then this is the company you are looking for.

Description of Work
The owner came out did a great job . He was fair on price. I would recommend Him and his crew to anyone looking for Roof work or replacement.

Shay was very professional, and took the time needed to make sure my wife and I knew the process and got what we wanted. The worklooks greatand was done quickly and even under our budget. I will definitely be recommending him to our friends

We are an emergency restoration company specializing in water, fire and mold damage.  …

When you find mold or mildew growing in your home, it is a clear indicator you may have moisture intrusion issues causing the growth. With over 10 years of experience in the mold remediation and water damage industry, DK Environmental is a great choice for your remediation needs. Do you have an older home and are concerned about the possibility of asbestos? No problem! We provide asbestos removal services as well! We have quality employees, which means we do quality work.  …

No, 1st Choice Home Construction Co. does not offer a senior discount.

No, 1st Choice Home Construction Co. does not offer warranties.

1st Choice Home Construction Co. offers the following services: Remodeling*Roofing*Carpentry*Framing*Doors*Dryrot*AllLeaks*Painting*Fencing*Plumbing*Windows*Electrical*Concrete*Tile-Hardwoods & all Flooring*Vinyl Flooring*Kitchen Remodel*Bathroom Remodel*Hauling*All dry rot*Drywall* repair*Siding*Windows*Gutters*Venetian Plaster*Insulation*Pest Control* We're specialize in everything to help save you money, and we have yet to come across a company as skillful and diverse as our own.

Are there any services 1st Choice Home Construction Co. does not offer?