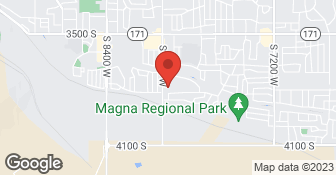 We are a family owned business with 3 full time employees and 3 part time.We run well maintained equipment and trucks for lawn service and snow removal.We except check,cash and credit cards....

Excellent! I was so pleased with the quality of the work and the price that i also hired him to remove and replace a fence, install a paver patio and install a new sprinkler system. In the spring of next year, I will also be hiring him on more landscaping projects.

Description of Work
I originally contacted Jonathan just to remove a couple of trees.

Originally it went well because I have a yard that is best done with a push mower. I was quoted $45 each time. The first job was of course great. As time went on, the trim work worsened, there was no attention paid to weeds (unless for an additional overpriced quote), and eventually they bought at riding lawnmower that produced very inconsistent results. They would come in and try to be out of there as fast as possible. Additionally, at the time I started with them they took cash or check. They arranged to arrive every Wednesday (which they did not) and so paying them because a headache because I never knew when they would arrive (and I do work as well). They worked for me for about 2 months in 2015. It was only towards the last of 2015 that I saw the quality start to decrease. When winter came, JB Lawn Works talked me into snow removal. I did hire them for that, but did not know that they they would be using a full ton truck with a plow on it to be doing my small 3 year old driveway. It was a light winter, but the damage done by the truck is massive considering the equipment used. I have a new company doing my work now for a much more reasonable price. Once I realized that a truck had been used on the driveway, I was outraged. This is the type of equipment you'd use plowing a Walmart Parking lot, not a residential home's driveway. It only took one month this year before I let them go because of the extremely poor work. He did offer two "free" mows, but considering the damage done to my driveway alone, I would no sooner allow him or his crew onto my property if he had the last yard care business in Utah. Pay particular attention to the truck used on my driveway and the condition of his own driveway in the one photo.

We specialize in pressure washing and soft washing services for exteriors of homes or businesses, sidewalks, driveways, decks, porches, patios, fences, roof cleaning, truck trailers, parking lots, and more! We guarantee your satisfaction, and we won’t leave until the job is done right. We pride ourselves on the quality work we provide, while delivering great customer service! Check out all the services we offer below and call -or- click to schedule a free estimate today!  …

M&M Gutters has been in business since 1992. Our experience includes the installation of thousands of gutter systems throughout Northern Utah including Utah, Salt Lake, Davis, Weber and Summit Counties. We are accustomed to working on homes that range from new homes, to remodels, to historical homes, to premier ski resort homes. You name it and we have probably done it. We are skilled and knowledgeable in completing the simple, straightforward job to the most demanding and complex. M&M gutters also specializes in commercial buildings, apartments & government buildings, etc.  …

Capitol Exteriors and Rain Gutters is a family-owned and operated company that is dedicated to providing you with unsurpassed customer service. We provide residential and commercial clients with Rain Gutters, Siding and Roof Ice Melting Systems. Based in West Jordan, UT, our team of highly trained professionals serves the greater Salt Lake City metro area, including Salt Lake County, Weber-Davis County, Utah County and Park City. At Capitol Exteriors no job is ever too big or too small! We offer sales, installation and repair for: Aluminum Rain Gutters, Copper Rain Gutters, Stainless Steel Rain Gutters, Galvanized Steel Rain Gutters, and Vinyl Rain Gutters. When it comes to gutter-related accessories, we carry Rain Chains, Aluminum Soffits, Chimney Caps, and Collector Boxes, so you can dress up your home's exterior. Also you can call us for Sales, Installation and Repair of: Vinyl, Siding, James Hardie Plank Siding, Wood Shake Siding, Ice Melting Systems, and Zigzag Heating Cable. All of our services and products come with our quality guarantee. We completely stand behind our work with a two-year warranty backed by a 20-year warranty on all materials. For your protection, we are fully licensed and insured, and all of our employees submit to background checks. Rest assured that we only hire qualified professionals to work on your home. Capitol Exteriors and Rain Gutters gets the job done right the first time. We look forward to being your Utah Rain Gutter and Siding Company of choice. Call us for your free estimate today!  …

JB lawn works is currently rated 3 overall out of 5.

No, JB lawn works does not offer eco-friendly accreditations.

No, JB lawn works does not offer warranties.

Are there any services JB lawn works does not offer?