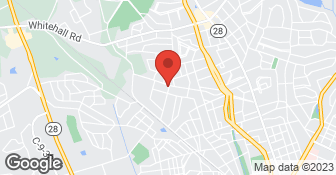 We offer a full line of home improvement services, from minor remodels to complete new builds. Quality of product and customer satisfaction are main emphasis. We do four things other contractors do not do; we show up when we say we will, we do what we say we are going to do, we charge what we say going to, and when your last check is cashed we will still answer our phone....

Our customer service is 2nd to none! Same day service available. Servicing Western North Carolina and Upstate South Carolina. Residential Garage Door Installation, Repair and Service. Our job is to make sure you are happy with the work we provide!

American Door Masters LLC is your number one source for all of your garage installation and garage repair needs.

Call 24/7 for a live operator. Call us any hour of the day, any day of the week for emergency repairs on garage door & openers. We'll fix it at time that is convenient for you. We are also available on Evenings & Saturdays.

I thought it was good. I was pleased. At the time, I was just checking out several companies. They were courteous and efficient.

DESCRIPTION OF WORK
I got an estimate from 1st Quality Home Improvements to install a laundry room.

He did a terrible job on my deck.  The paint job was really bad, you can see scratches all over the place and the wood was supposed to be smoothed out because I have three little children that play on the deck and he just cut it and didn’t sand it.  He had to fire somebody and he wasn’t there personally, so it was bad.  He asked me $500 at the beginning and in the middle of the work; he said that ...

DESCRIPTION OF WORK
I used 1st Quality Home Improvements to replace some of the wood on my deck and paint it.

I never talked to this guy until the end of the job, but spoke to his wife. There was never any mention of sanding the deck, only replacing broken or missing parts, and painting the deck. I told his wife when I would be there and was on the job the whole time we did it. I did not fire anybody and $750 was the original price quote.
1.0

He was horrible, I had to fire him. Nobody wanted to take on the job after him because he had done such a bad job. He ruined it. All the materials I had bought I had to throw away and just start over. He didn't know what he was doing. Everything was crooked. The roof is not touching the beams, nothing is supported correctly. He left the aluminum and put it on helter skelter. He didn't know what he...

DESCRIPTION OF WORK
We last used 1st Quality Home Improvements to screen in a back porch and put a roof on it. He came out in February and said he would have it done in a week and after 2 months I fired him.

this woman is a teller of untruths. I happened to be in the area the other day on my way to another client. I stopped and walked around the house, every thing is still there exactly as I built it, except they finished the screen work. I was actually on the job about two weeks. the reason it took this long was the weather was terrible, very cold and it rained most days.
5.0

Larry Wood gave the initial estimate on New Year's Day. We agreed on that visit that he would do the work. He stated he would begin on the first dry day. He called before arriving and completed the job over the two days estimated.

DESCRIPTION OF WORK
Bottom wooden rails around the deck and traversing the stairs were beginning to rot. Black metal "spindles" stretched from the top rails to the bottom with about six inch spacing. To avoid disassembling the entire structure, it was necessary to remove the bottom rails, extricate and shorten the spindles, and generously caulk all the holes and connections. The job was labor intensive and required little material.

1st Quality Home Improvements took off all the old shingles and put on new shingles and did a really good job. They had a large crew and they were very respectful. They did it quickly and what they did was just fine. They did a good job. Most of it was insured because we had hail damage and it was minimal what we paid. We have recommended them to three other people in our area that also had hail d...

DESCRIPTION OF WORK
They did our roof.