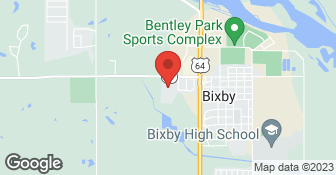 Part of Something Special...We believe in creating something special for our clients. To deliver a different kind of project experience from a company that cares. 918 Construction is your preferred Tulsa roofing contractor specializing in roof replacement for asphalt shingles, TPO, modified bitumen, cool roof coatings, sloped and flat roof repairs and free storm inspections for potential storm damage that may have been incurred after a hail or wind storm. ***** Call 918 Construction before you replace any metal or flat roof ***** We can provide you with an eco-friendly solution that will save you up to 50% in cost, provide a 50-year warranty that will include protection against ponding water AND save over 30% on your utility costs....

It went well. Luis, the roofing specialist of the company is knowledgeable. He did not come to do the initial inspection of the roof to give the estimate. But when he came to work on the roof, he did some checking and determined that the initial diagnoses was not correct. The new estimate ended up costing me much more. But that is better than spending on something that would not fix the leak. The finished work was good and seems to have fixed the leak.

Luis Arapio was very helpful and knowledgeable. We were very pleased with the work he and his crew did and will definitely use his services again

Luis was very professional, and explained what needed to be done. Work was completed in a timely manner and our leaky roof problem was solved.

They came right on time and did the job quickly.

The job were completed quickly and fairly priced. The overall experience was great.

Description of Work
The project manager was on top of the job. All went well and on schedule. The installers were pleasant and professional; they came to the jobsite on Saturday and at a short notice. Overall, I would highly recommend 918 Construction for quality and pricing.

It was free. I give them an “F” for responsiveness, because it took four voicemail's for them to get back to me, three months later. It took two or three days to repair. It was just one guy.

Description of Work
They came and did some repair work, warranty work. There were a few issues when they did the roof. Somebody had put their foot through the ceiling, and they had to come back out and repair what they had already repaired one time, because it was not repaired properly. It was repair to the ceiling.

He was persistent in looking for the leak. There was obvious water damage on the interior ceiling so he knew there was a leak. It was difficult to find, but he found it. He was professional and very responsive. It was a very good experience.

Description of Work
I had a leak in the roof that happened only sometimes when it rained. Luis sprayed water on the roof and looked and looked. He kept at it until he found it and then came back the next day to make the repair to my roof.

This is a follow up. It's been over a year since originally engaged. I bought an Angies list deal. 918 came out and told me I needed a big roof repair. I also paid them to repair ceiling damage. Total was $1,500. I was concerned leak was the window but they insisted it was the roof. They showed to repair the roof the first time without notice. After that I could not reach them for the ceiling repair. After finally arranging, they showed up and the worker said it was "too much" and he couldn't do it. Another few weeks passed before someone came. The repair was terrible. Beyond terrible. Lower quality than I could do. Fought for weeks, months, for them to fix it. Calls ignored, broken promises, poor communication. During this time, the ceiling had water leaking again. They refused to come back out. I had wasted money to repair a roof that didn't need repaired. So I was fighting two battles, the ceiling and the window which needed repaired. The ceiling was finally attempted again and even though it was a poor job it wasn't worth fighting anymore. After posting a poor review I was contacted by someone else to "help". They came out and said that the previous people were no longer with the company. They looked and said the roof repair was awful and it was clear it was a window issue. They agreed to replace the window and then repair the new water damage ceiling. The window was measured wrong and didn't fit. It took weeks to get it measured and ordered again. They tried to blame Lowes. I was asked to pay for the window, but not the install. They then refused to repair the ceiling. I had to continue fighting. They finally relented and gave me an ultimatum to pay for the window or the ceiling. I finally dropped it and hired someone else. Absolute worst experience of my life. I can back all of this with text messages, voice mails, and pictures. I've considered going to the local news.

Very pleased with the result. Project was done in a timely manner and with attention to detail to make sure that section looked just like the section next to it. Would definitely hire again.

Description of Work
Built roof and shingled over section of front porch. Repaired areas of dry rot and painted to match existing trim.

They came out to my house super fast and completed the work quickly. Matched my roof shingles perfectly I couldn't even tell which ones were the new ones.

Matched our shingles exactly. Quality repair with respect for our property.

We were very pleased with the quality of work. They delivered what they promised.

Description of Work
We've used them for roof repair and to add a concrete patio.

918 did an excellent job. They made it very easy, coordinated with our schedule, coordinated shingle deliveries around our use of the driveway, and always had practical solutions to any issues. Everything went according to plan and schedule. Roof looks great and no problems.

Very prompt. Kris was on top of every segment of the job and made sure all work was done to my satisfaction. I would definitely recommend and call 918 for other projects I might need help with on home or buildings.

subcontractor did a good job and was tidy and punctual with his service. Very courteous.

At first it went great. The roofers kept things clean, came when they said they would, left when they said they would leave. My roof started leaking and I had a hard time getting them to come out right away. FIVE WEEKS LATER the leak is now fixed by another company because they couldn't get it together. I also had siding done. They did a terrible job. I have gaps and the siding seams don't match up. I've complained since June and still have yet to have the issue resolved.

Description of Work
I had a roof and siding done after a major hailstorm in May 2016.

I called for an estimate for some roof repairs over 3 weeks ago and was told that someone would call me back to schedule a time to come out to look at what needed to be done and give me an estimate. However, they never returned my call. I guess my business wasn't that important to them.

Description of Work
I needed an estimate to get some roof repairs done.

Finished it quickly and I can't see the patch.

It went great! I could not be home at the time, but that was not necessary because they fixed the roof perfectly. You can trust them to do the job professionally every time. I have used them before and its always the same; perfect satisfaction! I recommend them1

Overall it was a pretty good experience the salesman was awesome but there were a few things that the company itself did that I was not too fond of. Quite too much to get into detail about but overall they got the job done

Called to confirm date of service. Asked for picture to match shingle color. Repaired roof in about an hour.

Description of Work
Replaced shingles that were damaged in wind storm

918 Construction was great to work with. They were responsive with communication. When problems came up they were quick to provide a solution. The project manager made sure that the installation was done appropriately.

Took a couple days to get them to come out, but they got it done, and I wasn't even needed to be there.

Complete Hardscape Construction Design LLC is a Construction Company that has been in business since 2015. We are Fully Licensed & Insured, where we offer guaranteed satisfaction and reasonable pricing. We have a referral promotion for 10% off for any referrals. Residential and Commercial Construction, Hardscaping, Driveways, Concrete Work, and More!  …

I have been in construction for over 25 years. I do painting, tile, roofing, siding, or even small jobs like screen or storm door installations, hanging televisions, installing ceiling fans, light fixtures, or sinks and faucets. You name is, I can do it! Please reach out for a quote! I look forward to working with you!  …

How is 918 Construction overall rated?

918 Construction is currently rated 4.8 overall out of 5.

What days are 918 Construction open?

What payment options does 918 Construction provide

No, 918 Construction does not offer eco-friendly accreditations.

Does 918 Construction offer a senior discount?

No, 918 Construction does not offer a senior discount.

Are warranties offered by 918 Construction?

No, 918 Construction does not offer warranties.

What services does 918 Construction offer?

Are there any services 918 Construction does not offer?