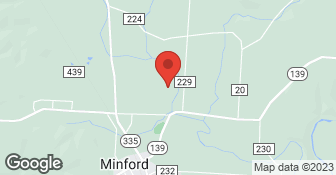 Owner-operated. 7 employees. Charge is determined by the job. No travel charges. No extra charge for after-hours calls. Financing available.

Paid $5000 down payment and received nothing but promises and delays. Still have not heard from him. He was arrested for accepting payments and not doing the work for other people and was in jail the last time I attempted to reach him. I depended on the review in June 2015 before giving him the deposit. I put in this review a year ago and it is not posted. I wanted to make sure people know of my experience and do not give this man any money and not get the job done.

Description of Work
Wanted a full metal roof on my house.

Description of Work
Gave contractor down payment. Nothing was ordered, nothing was done and I still need a roof.

He came took my money and didn't do the work.

Description of Work
He did not do the work.

Contractor was prompt, professional, and considerate.

This was a bad experience overall. Once the work was completed, I would consider the quality of the work and quot;barely adequate,and quot; whereas we were told that it would look completely professional. The main problems were the following: 1) Constant delays. We originally hired the contractor prior to Thanksgiving, and he told us he could finish it in time for Thanksgiving. However, he often did not show up at all, or arrive late, and when he did arrive, he would only work for a few (2-3) hours. 2) He constantly asked for more money, even though we paid him half of his labor charges up front, the other half to be paid at the end. Thus, we couldn't fire him for going so slow, because we would be out the initial payment. I wouldn't go so far to say that you shouldn't hire J and J under any circumstances, but I would strongly advise the following: 1) Do not give them any money up front, or if you do, make it a very small amount that you're willing to sacrifice if he doesn't show up, there are too many delays, etc. 2) Buy your own materials. Ask him what he'll need, and buy it yourself. 3) Hire him only to do outdoor, one day jobs.

Description of Work
We asked the contractor to renovate a basement bathroom, and tile the basement floor.

looks great and quality was great.friendly worker and answered any thing i needed to know.

13+ years in the painting industry commercial and residential we do interior and exterior painting, power washing driveway and houses we also can do special coatings for log cabins, roofs, floors and we can do minor construction work FREE ESTIMATES  …

All Season Construction can do any home remodeling or building you need. We can do decks, roofing, windows, doors, electrical, HVAC, drywall, kitchen, bathroom, add ons. You name it we can do it. We can make your dream home into a reality.  …

How is J&J Contracting overall rated?

J&J Contracting is currently rated 3.4 overall out of 5.

What days are J&J Contracting open?

No, J&J Contracting does not offer eco-friendly accreditations.

No, J&J Contracting does not offer a senior discount.

Are warranties offered by J&J Contracting?

What services does J&J Contracting offer?