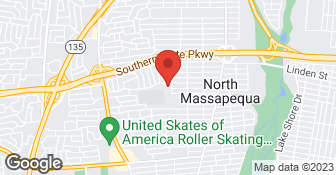 Does your driveway or parking lot have more potholes than a Los Angeles freeway? Let us work with you to provide the concrete and paving services you have always wanted. We will walk you through the entire process. Your satisfaction and happiness is our number-one goal. We have years of experience providing expert service and have the happy customers to prove it. Your totally custom paving project will bring you years of enjoyment. Our high-quality services can bring your vision to reality....

It went well, but stone cutting on my lawn damaged the grass in spots

Description of Work
I had my stoop refurbished with new stone

Graci Paving Associates was hired to install a new driveway as there was a claim of 45 years experience. When the job was done, part of the driveway came up. Other parts had waves in it. Mr. Graci said he never saw anything like it and tried to blame the poor installation on a non existent water problem. If there was an indication of any water problem and with 45 years experience, why was a asphalt installed? There were tire marks from his equipment embedded in the driveway. I have a picture of one of his workers work boot imprint embedded into the driveway. This was caused by water? I eventually learned that his crew failed to compact the ground properly. This resulted in the asphalt sinking in places. Mr. Graci had my money and said, after two failed patch jobs, that he would do no more. I told him that I would follow New York State guidelines to resolve this problem. He then said to me "I have friends and my friends and I know how to take care of people like you". I filed a police report detailing the treat that Mr. Graci stated to me. I have pictures to support my statements.

Choice Driveways have been paving ways in the town of Newton, MA for years, working closely with the locals to make your residential and commercial areas look smoother and updated. We are always at your service to take care of all your paving needs! We guarantee your satisfaction and we won’t leave until the job is done right. We pride ourselves on the quality work we provide, while delivering great customer service! Check out all of the services we offer below and call -- or-- click to schedule a free estimate today!  …

T. Riccoboni Asphalt Paving is an owner operated business started in 1987. Tim Riccoboni has been doing Asphalt (blacktop) work all his life, as his father and grandfather did before him. We take tremendous pride in our work, and treat each job, each driveway, each parking lot, and each roadway as our own. We give 100% to make it “the way its supposed to be.” It’s a rare thing these days, but we build it to look great and to last a long time! We give you your money’s worth! Nassau license H2042830000, Suffolk licence 20756-HI.  …

Graci Paving Associates, Inc is currently rated 3 overall out of 5.

No, Graci Paving Associates, Inc does not offer eco-friendly accreditations.

No, Graci Paving Associates, Inc does not offer a senior discount.

No, Graci Paving Associates, Inc does not offer warranties.