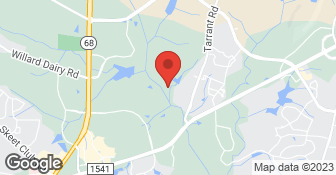 We are your Greensboro based locally owned & operated leader in streak free window cleaning, lifetime guaranteed window tinting products, pressure washing & gutter cleaning services. All our Window Genie technicians wear photo ID badges for your protection and have been trained on the importance of quality service before entering your home and office. We are fully insured, bonded and ready to provide you with the very best in professionalism, customer satisfaction & job quality....

We are a professional pressure washing company that specializes in both residential and commercial cleaning. We are licensed and insured and have exceptional ratings with both the BBB and Angie's list. We wash windows, roofs, decks, fences, concrete, houses, commercial buildings, and gutters. We make it our goal to exceed your expectations.  …

We have the experience and dedication to bring your dreams to reality! We guarantee your satisfaction and we won’t leave until the job is done right. We pride ourselves on the quality work we provide, while delivering great customer service! Call or click to schedule a free estimate today!  …

They were great. And did a really good job.

Description of Work
They cleaned all the windows on the main level, inside + outside.

Steven and Alex did a fantastic job -- windows cleaned to perfection, professional and pleasant to work with, and a fair price.

They were on time and very professional and courteous. The work performed was excellent.

[Member Name Removed], Thank you very much for your review and especially your feedback. We really appreciate it! Mike
5.0

Very good with good tips and advice for maintenance.

Very well. The crew was very good at keeping me in loop timing wise. Had an afternoon appointment and they called twice in the AM with an update on timing. Walked around home to begin with, performed the work and then walked around again after the job was done. Would hire again for sure!!

Description of Work
Did a complete power washing of the outside of the house.

Tim, thanks so much for the review! Our goal is to make your service experience the best in quality, communication, and respect! I hope we achieved that. Again,thank you. Mike
5.0

The house had a year plus of grime and they did a great job of cleaning in a very timely effort.

Thank you very much [member name removed]! We all at Window Genie appreciate the review and look forward to working with you again.
2.0

Not well. Had to wait nearly a month for the work to be done, just barely coming under the wire with the HOA and avoiding fines. Apparently, they were booked quite heavily. I came home to find nasty brown streaks on all sides of my house. I've never had that happen in the past with pressure washing, and we do it regularly, as our house has vinyl siding. I also found that paint was removed down to the wood on the cap over our double garage door (on front of house) and on the door frame at rear of house. Now I have to have a handyman or painter repair that immediately, whereas I'd planned to do it later (before winter arrives). Also, the workmen had apparently sprayed the cleaning solution directly on our doorknobs. Our keys only worked with great difficulty. I have since learned that most people who do pressure washing will tape up the knobs to avoid this. We would have gladly done this ourselves in advance, but have never had this problem before and were not aware that it was a risk. We're still struggling with the keys five days later! My husband, who was there at the time of service, found the workers to be rushed and rude. When he asked about another item that needed attention (we would have liked an estimate or would have paid more to have this taken care of at the time), he was told they didn't have time for that. His impression was that they didn't particularly care if they got repeat business from us or not. They did the work so fast that we wondered if they were perhaps overbooked that day. Neither of us were impressed and we would not use them again or recommend them to anyone.

Description of Work
Urgently needed pressure washing of house - HOA was threatening to fine me if this wasn't done in a timely manner (we'd had a bad period financially and had been dealing with some health issues, so we hadn't been on top of some of these normal repairs and maintenance issues). There was some mold and mildew on the house, so pressure-washing was on my list of projects for the house (we have recently purchased a new A/C and will be reroofing in the near future.)

Very good. Team was here promptly. Had to reschedule due to weather and team actually came by to tell us in addition to a phone call. Very professionally and friendly team. Would definitely use again!

First of all, let me say I am not one usually to write reviews. Most of the time I need to be enticed with a free gift card or something. But in this case, I truly am blown away with how amazing this company was that I want to reward them and spread the word to build their business as they are certainly worthy. Window Genie is a top notch wonderful company. From booking to finished product, this is a smooth oiled machine. Window Genie and Mike treated me like VIP from start to finish. Mike was incredibly easy to book even though my house was outside his normal service area. He checked in a couple times to confirm the appointment as the day approached both by phone and email which I greatly appreciated. He was remarkable when I needed to change the time of my appointment close to the day of due to a doctors appointment. The day of, Bryant came and was one of the most respectful nicest people ever, and best of all he made my house look awesome. The house is sparkling and Bryant spent so much time on detail trying to get all the muck of my house. If you need your house pressure washed, do not hesitate to hire this company (I would expect that they are just as exceptional for windows and other services they provide as well).

[Member Name Removed], thank you very much for your very favorable review. It makes my and my techs days when we accomplish our mission to give you a superior service experience.
5.0

Very well. Michael got a quote to me a couple of days after I called. He was then able to schedule in 2 weeks. I asked that it be scheduled in one week and he accommodated my request. The work was completed in less than 3 hours. They asked me to check it and if I pointed something out, they went back and reworked that area. They did a great job.

Description of Work
2 story house power washed and all windows cleaned inside and out.

[Member Name Removed], I have been meaning to thank you for a long time. We really enjoyed working with you and look forward to keeping your home shining for years to come. Thank you!