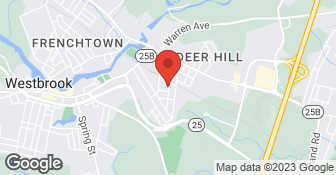 One of the only plumbers I called who picked up the phone. Arranged a date and time for him to come complete the work. Confirmed the date and time again. The day came and no one ever showed. Called and left voicemail asking where they were and still no one contacted me about why the plumber never showed up. Would never refer them to anyone else for that unprofessional treatment.

Description of Work
I needed a few replacements in a recently redone bathroom.

Arrived promptly , called me with details of the problem, fixed everything quickly

It went very well. I would use them again and recommend them to my friends and family.

Description of Work
They installed a new toilet for us.

He was excellent. I liked that he was prompt, polite and professional. I do not think he overcharged me. I will use him again.

Description of Work
We used Jim's Plumbing & Heating Inc to come and check on the furnace because we thought it had a problem.

It was a satisfactory occurrence. He was very pleasant. Once I showed him everything that needed to be done, he just went ahead and did the work. When I stopped him on whichever task he was working on, and if I had any questions, he was very patient and polite to answer my questions. We had a little trouble catching up with each other so I called him and he didn't call back. I called him and caught him. Then we were able to make an arrangement the second time around. The price was fair. Once we got it figured out; he was a little late and he called ahead to tell me. His professionalism was good. I would use him again in the future and I definitely took a card.

Description of Work
I used Jim's Plumbing & Heating Inc to do 4 tasks; He fixed the tub drain which was leaking, a radiator valve that was broken, a ruptured furnace pipe and he also fixed the switch for the water on the washing machine that was leaking.

I thought he did fabulous work and was reasonably priced. I would definitely use him again in the future.

Description of Work
I had Jim's Plumbing & Heating come out to do some heating work on my house.

Jim has done numerous jobs for me over the years. He has just been very reliable. Jim is a gracious man.

Description of Work
He replaced my kitchen sink.

He examined the situation and fixed it without having to drain the system. He is very good at problem solving and does not waste time or money to do it. When we get the bill, I know it will be fair. Jim has been our plumber for 25 years. I won't use anyone else.

Description of Work
Jim came on a Saturday! when my husband called him to report a radiator leak in the basement.

He responded within a day of my phone call. He came and evaluated the situation. He picked up a new water heater and installed it and delivered it the next day. It cost a lot of money, but it was great.

Description of Work
Installation of a new water heater.

Waterdog Services is here to answer all your plumbing questions! Any job big and Local, friendly and professional with the skills to back it. 24/7 service for all of our customers! Dont be afraid to reach out!  …

Sealing, Duct Cleaning, Indoor Air Quality, Heating, Air Conditioning and Indoor Air Quality Products, and Commercial Services for your business. Our Exclusive Written Guarantees Are Designed to Protect You and Your Home Request a free home estimate, Design your own heating and cooling system, Shop for filters or accessories online, Request an In-Home Aire Quality Survey .  …

Jim's Plumbing & Heating Inc is currently rated 4.9 overall out of 5.

No, Jim's Plumbing & Heating Inc does not offer eco-friendly accreditations.