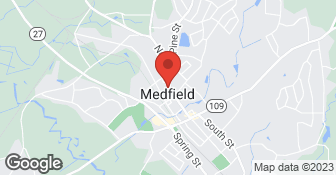 Description of Work
In-law/family apartment for two disabled parents with a room above. Apt consists of two bedrooms, living space, full bathroom, full kitchen, laundry. Room above is a master bedroom with walk in closet and full bath. Two existing bedrooms and bathroom were also renovated.

Work began in winter of 2013 and completed in summer of 2013 (approximately 6 months). BC Building investigated all town building codes to ensure that everything was done to code from the beginning. All town officials were contacted for site visits at the appropriate time (building, electric, plumbing, fire, etc.) to check and sign off as project was underway and completed. Owner of company has many years experience and it was demonstrated by his suggestions, designs, and other ideas that did not occur to us. He worked well with us and with all the sub-contractors hired to complete various parts of the job. Communication was constant, and any changes to scheduling, buildling plans, or materials were explained clearly and coherently. The budget was discussed weekly, and the project was completed on budget. BC saved expenses whenever possible by recommending specific materials or design changes when it made sense to do so. He always explained the differences and ultimately let us decide which direction to take. For example, we thought having more rug and less tile would be more aesthetic, but after some research and BC suggestions, we opted for mostly tile. That idea has worked out great--looks good and easier to keep clean. BC's suggestions for wall finishes and ceiling material were excellent. He also designed a wonderful layout for the bathroom/laundry. BC's contacts with suppliers allowed us to choose the kitchen materials and surfaces from a wide range of designs. We (and our tenants) are thrilled with the kitchen design. Based on my experience, I would strongly recommend BC Building for any residential building project. In the future, I hope to have BC build a garage for us.

Description of Work
BC Building gutted the entire old basement in a 90 year old house and transformed it into a modern four room apartment with separate entrance. Also built a storage shed in the backyard a few months later.

Thanks [member names removed] for the great review I appreciate it you have been great customers to work for it was a pleasure serving you.
5.0

Service was outstanding. Bill arranged all of the details and ensured that the sub-contractors were of excellent quality. Work was done on time and at a very reasonable cost. Bill brings a great set of skills and contacts that makes any home improvement job much easier to tackle.

Description of Work
Provider repaired weather damage in my home, arranged for painting and other staging associated with putting our home on the market and also repaired the front porch that had settled including complex masonry work.

Thanks so much for your great comments you have been oustanding customers ! Bill Cusano

"We are a company of home improvement that aims to offer a good service with a good price. Our commitment with quality has more than 14 years. We guarantee our services with a 3 years warranty and we are fully insured to serve you better. Our goal is to make your life simple letting you feel that you can count on us when the question is renovation."  …

Marilyn & Company, doing business under the Keller Williams umbrella, takes a different approach to real estate--one that is built on customized planning/partnering with you (consulting), personal touches, win-win deals, and positive results. Marilyn (Cannon) Burke and her team utilize the latest technologies as KW enters 2020 as the #1 technology company in the business of real estate. The KW platform gives Marilyn's clients access to a worldwide Multiple listing system and massive outreach for buyers looking for homes. Marilyn's mobile APP travels with you so buyers can look at any home, anywhere in the world. Marilyn's background includes a BA in Arts with a concentration in teaching as well as several designations contributing to her becoming a listing expert. She's also an Accredited Home Staging Pro with a concentration in Interior Design from RISD. She is actively involved in all aspects of getting your home ready for sale with a concierge menu of home services to make the home selling process easy from start to finish. With a 35-year sales career meeting clients' needs and a proven track record of results, she's become the smart choice for those who want a full-time specialist who can get the job done. Call/text Marilyn today at 781-603-5261 for a complimentary consultation.  …

Dimitri's Painting & Masonry offers the highest level of professionalism and workmanship. We pride ourselves on being customer focused and are extremely detail orientated. Look through our image gallery, and see the diverse projects we have done. We understand that anytime someone is in your home doing any type of work, it is inconvenient. We will protect the areas that we are working in. We will perform an organized and well thought out project of the area that work is being performed in. We will remove any construction debris from the job site. We will clean up at the end of each working day. I Dimitri take pride in my workmanship, and look forward to your call. Thank you, Dimitri  …

All statements concerning insurance, licenses, and bonds are informational only, and are self-reported. Since insurance, licenses and bonds can expire and can be cancelled, homeowners should always check such information for themselves.To find more licensing information for your state, visit our Find Licensing Requirements page.
General Information
Free Estimates
Yes
Eco-Friendly Accreditations
No
Payment Options
Check
Senior Discount
No
Warranties
Yes

B.C. Building Company is currently rated 4.7 overall out of 5.

No, B.C. Building Company does not offer eco-friendly accreditations.

No, B.C. Building Company does not offer a senior discount.

Are there any services B.C. Building Company does not offer?