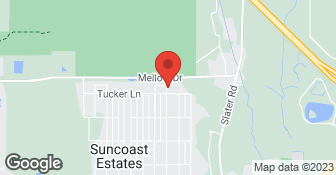 We have been in business for 14 years we are family owned and operated. We specialize in doing the job right the first time. We can make your home and property shine. Our philosophy is straight forward...we work for you. Thinking the tree work you need done will be too costly? We are the only tree service company in the state that offers financing with approved credit. We also offer 24/7 dangerous tree removal....

Our mission is to be a provider that brings back the personal touch with our customers. We will build a relationship that will last a lifetime after you see our quality work. As a locally owned and operated business we feel invested in our clients and constantly strive for customer satisfaction. We won't leave until the job is done right! Call or click to schedule an estimate today!

After submitting a quote request through Angie's List on Monday, September 9, I received a text from a representative and she came to my house the same day to give me a quote! The quote was very reasonable and I agreed to have them do the work. The rep said she would let me know as soon as possible when they would come out to do the work. On Friday, September 20 (a week and a half later), I still ...

We are very sorry we get caught up on big jobs and have to finish them we will never leave any customer hanging once we start job very sorry we didn’t get to you as fast as you wanted us to
5.0

folks, this company is the real deal - no "work out of a pickup" operation. They brought in a boom truck for the high work, and a large grappler truck to clean it all up. They also brought a big enough crew to blow through the work in under 3 hours. it looks fantastic. Chris is prompt (contacted him yesterday and they were finished 24 hour later. He said he normally can't schedule work that soon, ...

Chris was friendly, prompt, knowledgeable, fair, and a pleasure to deal with. His team worked quickly and efficiently. They were kind, courteous and completed a huge job in just a few hours. My husband and I were amazed and thrilled! We will definitely contact Chris again for service in the figure. Highly recommend!

.I had them come out and immediately after hurricane Irma. He got an attitude with me after I said I was going to get a second opinion. We decided to part ways right away. The first time I called him a year ago he never showed up. I decided to give him another chance and he was on time.

DESCRIPTION OF WORK
He just gave ma a quote on tree service.

I first sent a note through Angies List but then decided to call and see if I could speak to someone. I got Chris and thankfully he gave me the "skinny" on fallen Poinciana's, the forecast of the general health and prognosis for additional storm tolerance. He explained (although not something anyone who has/had a beautiful tree like mine wants to hear....) it's pay me now and a good probability yo...

DESCRIPTION OF WORK
I have a royal Poinciana tree that blew over during Hurricane Irma. I was calling to see first if someone was available in fairly short order since the tree has already been on the ground for almost a month. Then I was calling to see how much it would cost and whether it was viable after so long.