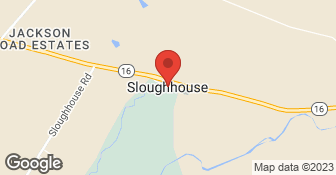 George is skilled, easy to work with, and goes above and beyond to get the job done. Despite expanding the scope of work (unforeseen issues in an old home), the job was done on time and beyond our expectations. We are so happy with the results! George was communicative with both my partner and I throughout the entire process, we plan to hire him again for future projects and cannot recommend him highly enough!

George Smith, the contractor, was a perfectionist with all his work. He went above and beyond my expectations. He would only consider a project done when it was perfect. George would communicate with me almost everyday to keep me up on his progress. The job started as just a house remodel and, due to the age of the house and discovering the foundation had been compromised it resulted in needing more work done. George took on every new project right away leaving a very professional job. I would use him again without question. I would recommend BMT Builders to anyone...I guarantee you will love his work.

Description of Work
A total remodel of a rental home. Rebuild foundation, replace doors and frames, Tear out and totally remodel the kitchen and bathroom. Tear out all flooring and replace. Replace and texture major areas of drywall. Replumb entire house. Install modern instant water heater.

I would hire BMT Builders (George Smith, owner) in a minute for any and all projects. From the first time we met George, he was a straight-shooter. When we were talking about the project, he made sure we knew that he was committed to quality work. He and his assistant, Daniel, were always on time. On the rare occasion that they were late, they called early to let us know. In addition, although he had much larger jobs he was working on, George gave the same care to our small project as if it was a million dollar job. George did a thorough inspection and after we had shared what we wanted, we all went down to a tile store where George showed us our different options. Each day he worked he would explain in person or over the phone what he had done that day and what he was expecting to do the rest of the week. As usual, the unexpected happened. George discovered that our Master Bathroom (which backs up to this one) had some significant leaks. George went out of his way to inform us without pressuring us to make a second contract with him. But, since we were already tremendously impressed with his work, we signed a second contract. The bottom line was both bathrooms were remodeled in a professional and timely manner. Communication with George, Daniel and the rest of the team was top-notch ... we always knew what was going on. In addition to finding a skilled craftsman in George, we also made a friend.

Description of Work
We needed a bathtub/shower remodel in our front bathroom.

George is an exceptionally knowledgeable and experienced contractor. His team completed the kitchen remodel on time and within budget. I could not be happier with the result. - Knowledge and experience: George is very experienced in construction and knows what works and what doesn't in a remodel. He is also an attentive listener who takes the owner's needs to heart. When there is a difference of opinion, he is never pushy. He always explains clearly and concisely what he is thinking and how he comes to his conclusions. - Professionalism: George and his team are true professionals. They are courteous, organized, and efficient. They work quickly but carefully. Whenever issues come up during the remodel, they were able solve the root problem instead of making quick workarounds. The job site is cleaned up nicely at the end of each work day. Even though George is extremely busy, he always responds to my emails and texts within 24 hours. - Cost: George provided one of the most reasonable estimates during the bidding process. Throughout the remodeling process, he stayed on budget despite the many unforeseen problems that came up. - Overall: One of my top priorities for the remodel was to add to or keep the value to the property while making the kitchen more appealing and useable. George listened to my plan for closing an open kitchen, and suggested that I keep the open kitchen concept and rearrange the floor-plan to add more storage without closing the space. We discussed the topic in length and I was finally convinced by his vision. The result is a very lively and bright kitchen that would not have been possible had we gone through with my original plan. The end result is durable, functional, and aesthetically pleasing without breaking the bank.

Awesome. He was fantastic. He was very willing, he always gave us an update, and gave us a really good deal. He was very personable, very professional, and great work.

Description of Work
He remodeled 2 of my bathroom and did the constructional work on my deck.

Description of Work
He completely did the tile flooring. He redid my entire kitchen, bathroom was redone, and laundry room.

Any time you work on an old house you find surprises around every corner but George met them head on and always found a way to work around them and stay within budget and within the timeline set. He came up with some great suggestions that we had not thought of that saved us a ton of money just by changing the brand of the tile which allowed us to do a wall to floor tile for less money than what we had picked for less tile but more money. It was a great experience after hearing so many horror stories about contractors to find George and BMT Builders for our first job on our first house and have it go so well with great communication and finish on time and at budget. Thanks, Angie's List !

Description of Work
Repair, Renovate and Install new bathroom with tile and shower in our new home. BMT removed all the Dry Rot, removed old toilet and tub, installed shower stall, toilet and sink, laid new floor, floated new walls, tiled entire shower stall and floor. They made our bathroom the showpiece of the house plus George Smith the contractor was amazing to work with and will be our contractor for many more projects to come...

All the work was done with care to detail and professionalism. We cannot overstate how pleased we are with the results. Promptness and neatness were evident throughout the project. And the fact that the job was completed on time reflects the skill and professionalism of Mr. Smith and his crew. We recommend him without question.

Description of Work
A previous garage conversion to an office and storage area was remodeled to become a bedroom, bath, walkin closet, and an adjoining storage and utility area. The job required leveling the concrete floor which was originally sloped for a garage. The hot water heater was removed to gain space and replaced with an on-demand water heater. An architect drew up the plans. The work involved demolition and interior reframing, major plumbing and electrical work, granite floor and wall installation in the bathroom, insulation and drywall installation, door and window installation, and texture and finish painting.

We here at Woo Brothers Electric Inc. pride ourselves on doing the right job for the right price. We are staffed with several certified electricians, and some have accomplished there Master Electrician certificate as well. We do everything from small repairs to large commercial buildings, with an additional focus on service work. In addition to our C-10 electrical license we are certified as general contractors so whether your project is big or small Woo Brothers Electric can do it all!  …

Hello! My name is Tracy Lennon and I have been painting homes in the valley for 35 years. I offer the best price and the highest quality painting. You can't get the lowest price and the highest quality no matter what any other painter tells you, You will only deal with me, I actually do the painting, not a crew of strangers that you have not talked to before they show up at your home. Give me a call so I can put you in contact with some of my satisfied customers. I have been running my business with the best kind of advertising, word of mouth, for 35 years so give me a call and let me add you to my list of more than satisfied customers. Thanks for letting me serve you! Tracy Lennon 1-209-601-0905 anytime p.s. I'm a guy and not related to John Lennon of the Beatles, but I do have a band, and I am related to the Lennon sisters of Lawrence Welk fame. 35 years experience Interior/Exterior Pressure washing Drywall repairs Texturing High ceilings Resedential/ Commercial No job too big or too small Work nights and weekends License #787589 1-209-601-0905 anytime  …

Bonded
Insured
All statements concerning insurance, licenses, and bonds are informational only, and are self-reported. Since insurance, licenses and bonds can expire and can be cancelled, homeowners should always check such information for themselves.To find more licensing information for your state, visit our Find Licensing Requirements page.
General Information
Free Estimates
Yes
Eco-Friendly Accreditations
No
Payment Options
Check
Senior Discount
Ask for details
Warranties
No

How is BMT Builders overall rated?

BMT Builders is currently rated 5 overall out of 5.

What days are BMT Builders open?

No, BMT Builders does not offer eco-friendly accreditations.

No, BMT Builders does not offer a senior discount.

Are warranties offered by BMT Builders?

No, BMT Builders does not offer warranties.

What services does BMT Builders offer?