Why Does Salt Melt Ice? A Scientific Guide

The dreaded part of every snow day is having to put down your hot cocoa and brave freezing temperatures to deice your driveway. It’s an inevitable part of being a homeowner, and, thankfully, salt makes it a little bit easier.

Salt is an excellent ice-melter, but have you ever asked yourself, “Why does salt melt ice?” The answer is hiding in your old chemistry textbook. Let’s take a closer look at this matter of simple science.

What Type of Salt Is Road Salt?

Most of the salt we use to treat our roads before a snowstorm isn’t that different from the salt we put on our popcorn. They’re both sodium chloride (NaCl). The type we put on our driveway is known as rock salt, and it’s not as pure as what’s in your kitchen (so don’t try to eat it). Some cities also use other salt mixtures, known as salt melts. These include:

Calcium chloride is less expensive and more effective than sodium chloride, so it’s a popular choice for cities or business owners that have to melt large areas of ice. Magnesium chloride is more expensive than traditional rock salt, but it’s effective in temperatures up to negative five degrees Fahrenheit.

Why Does Salt Melt Ice?

Pure water freezes at 32 degrees Fahrenheit. This is known as the freezing point. When the ground is at or below the freezing point, water will start to freeze on the surface and form slicks of ice. At this point, most homeowners reach for a big bag of driveway salt to spread across their walkways—but how does it work, exactly?

On the average driveway, rock salt will typically decrease the freezing point of water to around 15 degrees fahrenheit, according to the American Chemical Society. The true freezing point depends on the concentration and type of salt.

It’s important to note that salt can only lower the freezing point of water if it’s dissolved into the water. In other words, it can’t melt solid ice—but it can dissolve into the layer of water on top of the ice, which helps melt the ice below. There needs to be some liquid present for salt to work.

For that reason, pretreating is sometimes more effective than dumping rock salt on solid ice and hoping the sun will do you a favor. If you pretreat your driveway with salt before the temperature dips, the salt will have a chance to mix with slush before the water freezes. You can also pretreat with a salt spray solution, where the salt is already dissolved.

In the United States, the average winter day rarely falls below 15 degrees, so salt is an effective deicer. Unfortunately, it doesn’t always work well in extremely cold climates (like in Canada and Alaska) or on colder roads. As temperatures decrease, so does the solubility of salt in water. At a certain point (usually around 15 degrees Fahrenheit), the water can’t hold the salt and it will freeze.

Have you ever noticed a “bridge freezes before road” sign when you’re driving over a bridge? Bridges are usually made out of materials like steel and concrete, which are good at conducting and losing heat. They also have more surface area for heat to escape because they’re surrounded by air on every side. If that air is frigid, the bridge will ice over more quickly than the regular road, which is holding heat from the ground. If it’s really frigid, the bridge can get so cold that salt won’t be as effective (even if salt worked on the surrounding streets).

The dangers of rock salt aren’t always apparent, but it carries an environmental risk and can even burn your pet’s paws. According to Columbia Climate School, chloride is toxic to aquatic life and runs off into lakes and groundwater, disrupting freshwater ecosystems. It’s also rough on vegetation. There are alternative ice melts like Calcium Magnesium Acetate (CMA), but some homeowners prefer natural options including:

Since salt can’t always melt the ice on roads in colder climates, homeowners in these areas rely heavily on plowing and sand. Sand can’t melt ice, but it can help create friction so you (and your car) won’t slip. 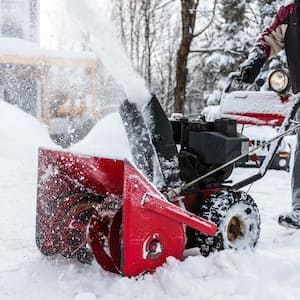