Does Installing a Fireplace Increase the Value of Your Home?

A fireplace used to make home values hot, but desire is cooling off

For most homeowners, fireplaces are a sought-after amenity—especially in colder climates. There’s nothing like curling up next to a warm fire and watching it snow (as long as you avoid the inevitable conversation about whose turn it is to shovel the driveway). There’s a lot of evidence that fireplaces raise property value, but it may not be by as much as you think.

There’s no question that fireplaces have historically increased home value. A 2016 Angi survey found that 70% of real estate agents believed fireplaces were a value-add, and 77% of buyers would pay more for a home with a fireplace.

The problem, though, is the sum. If the average fireplace costs between $850 to $3,500 to install, how much are people willing to pay for one that’s already there?

At the time, the majority of real estate agents believed an indoor or outdoor fireplace added between $1,000 and $5,000 to the value of a home, but only about 35% of buyers agreed. Nearly 25% felt a fireplace wasn’t worth more than an additional $1,000, and 23% of buyers wouldn’t shell out anything extra at all.

In other words, installing a fireplace definitely adds some value to your home, but that value could easily negate itself. Building a wood-burning fireplace can cost up to $30,000 if you don’t already have a chimney.

Though electric fireplaces and other ventless fireplaces are much less expensive, upgrades like finishing your basement or remodeling a bathroom could provide a greater return. 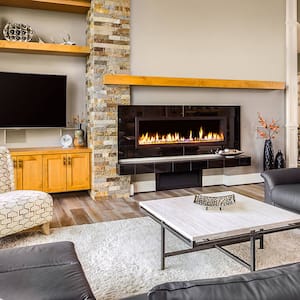 Is an Electric Fireplace Worth the Money?

With an average cost of around $700, electric fireplaces are affordable and can add ambiance to your home

Specific monetary value aside, fireplaces still seem to be tied to high-priced homes, even today. In 2021, Redfin revealed that the average home with a fireplace was listed for 13% more than the national median sale price.

Those homes typically sold for around the asking price, too—though, it’s important to note that 2021 saw a surge in home prices amidst a historic demand.

Nonetheless, Redfin found that homes with fireplaces averaged the most views per listing (even though that figure has been plummeting since mid-2020). Gas fireplaces were particularly attractive to home seekers, and homes with the trend had some of the highest sale-to-list ratios compared to other popular features.

The Desirability of Fireplaces Is Changing

Fireplaces used to be one of the most sought-after features—but that’s slowly changing. In 2019, the National Association of Realtors noticed that some homeowners were actively removing their fireplaces, and builders were increasingly excluding fireplaces from new construction.

Just 41% of newly constructed single-family homes had a fireplace, which was a record low. That same year, the National Association of Home Builders (NAHB) found that just 16% of buyers listed fireplaces as a must-have amenity on their annual “What Home Buyers Really Want” report.

By 2021, indoor fireplaces were firmly knocked out of the top five most-wanted features. So, why are fireplaces falling out of trend?

The National Association of Realtors points to:

Regardless, a fireplace is still considered a desirable feature, especially in colder climates. It might not be a must-have that will increase the value of your home, but most buyers still view it as a plus. You can’t beat cozy; you just might not be able to put your kid through college with it. 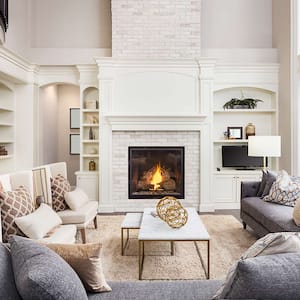 Pros and Cons of Different Types of Fireplaces