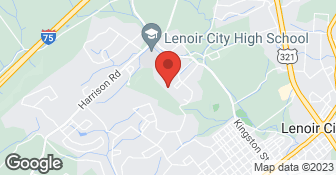 We have a minimum of 3 employees at all times, We are not yet set up to take credit cards, but we take cash and checks. We do not have any financing options, but we do have certain discounts for servicemen, veterans, seniors, and we do low-cost moves for abuse victims. we also do run specials occasionally....

Description of Work
I needed 4 items moved from one apartment to another, a refrigerator, 2 cloth recliners and a butcher block. All of these items purchased in April of 2017 when I got my backpay from Social Security!

Not only did you not hire us throught thumbtack, your husband called and spoke to me directly and had the job booked before we even got your request through thumbtack, but we told you it was gonna be raining, and you insisted on doing it anyway. You also told our crew when they first got there that the men that deliverd your fridge when you bought it were the ones who messed it up. Your fridge was scratched when our men arrived, so it is obviously not our crews fault. I spoke to you and your husband both off and on for a week about the little bottom peice, and not once did you even mention any damage to the fridge, just that that little grill peice was missing. We do not owe you any money for damages, since our crew did not damage anything. We returned the missing peice as well once we were able. As for our companys name change, it was due to persoal reasons. One of the two origanal owners decided to move out state, and left the company. Therefore there was only one j, so we changed our name. We do not screw people pver, we just dont let customers extort money from us. Aside from you being ticked cause we wont just give you money we dont owe you, prety much all of our past customers have been extreamly happy with the work done, and some have even had us move them twice! We will not stand for being slanderd, or threatend, like you did in the email you sent us. Have a good day.

Hello everyone! I would be happy to clean your homes! My services are simple cleanings, deep cleans, and move in cleanings. Please fell free to call or text me for more details. I look forward to hearing from you!  …

I provide top notch cleaning for affordable prices. I offer weekly, biweekly, monthly, one-time, move-out, or move-in cleans. Home estimates are offered in an a la carte type menu that you can put together what you want done and specify it to your needs. Or, you can have it all with a deep clean. We stand out by focusing on the clean and not the time it takes to clean. Many cleaning company’s have time limits on the cleans. I prefer to offer a clean home vs a fast time set rush job. I want my clients to have an experience when it comes to having a clean home. I have been cleaning my entire life and I am the owner-operator. So, I decided to make a career out of doing something that I am passionate about and great at. I have a small close-knit staff so it will not be someone new each week. I can usually get you within an hour window on the specific day to be cleaned. You will never have to wonder when and who is going to be in your home. I think communication is the most important part of being a small business. I also know that a good business has to be dependable, reliable, trustworthy, and have some common sense. I always look forward to having my business grow. I couldn’t do it without the support of my clients and community. Thank you  …

We go above and beyond the rest! We take pride in our cleaning service! We are a small business taking on new clients in Knoxville and surrounding areas. We look forward to Blessing each client to ease some of the daily stress.  …

All statements concerning insurance, licenses, and bonds are informational only, and are self-reported. Since insurance, licenses and bonds can expire and can be cancelled, homeowners should always check such information for themselves.To find more licensing information for your state, visit our Find Licensing Requirements page.
General Information
Free Estimates
Ask for Details
Eco-Friendly Accreditations
No
Payment Options
Check
Senior Discount
10%
Emergency Service
Yes
Warranties
Ask for details

We offer moving/labor services. In-home moving, full-service moves and loading/unloading. We also have packing/unpacking services. We do final clean-ups, construction cleans up, and domestic cleaning. By-weekly, weekly and monthly.

We do not do crawl space cleaning, gutter cleaning, pressure washing, fireplace or wood burning anything cleaning, pipe cleaning or roofs.

How is Bald Eagle Moving and Cleaning Services overall rated?

Bald Eagle Moving and Cleaning Services is currently rated 1 overall out of 5.

What days are Bald Eagle Moving and Cleaning Services open?

No, Bald Eagle Moving and Cleaning Services does not offer eco-friendly accreditations.

No, Bald Eagle Moving and Cleaning Services does not offer a senior discount.

Are warranties offered by Bald Eagle Moving and Cleaning Services?

No, Bald Eagle Moving and Cleaning Services does not offer warranties.

What services does Bald Eagle Moving and Cleaning Services offer?

Are there any services Bald Eagle Moving and Cleaning Services does not offer?

We do not do crawl space cleaning, gutter cleaning, pressure washing, fireplace or wood burning anything cleaning, pipe cleaning or roofs.