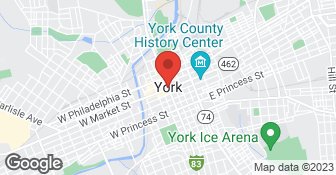 Clearview Cleaning. Better than the best....

We used ClearView to clean the windows and screens at our home for a few years. They started off doing a good job, however over time the quality of their work declined and the last few times they came their work was barely adequate. They offer a number of services, so I asked them to price out some exterior powerwashing we needed done. Their price quote was absurdly expensive. Insultingly expensive. It was as if they were saying "We don't do this kind of work, but if you're dumb enough to pay this much for powerwashing, we'll take the business". I got three other, competitive quotes and all were for a small fraction of what ClearView quoted. We obviously will not be using them again.

After missing the first appointment, Chris did show up to the house with a co-worker to provide an estimate. Chris did not present himself in a professional manner and did not inspire confidence that he knew what he was doing or would be able to provide the service. I received a second estimate from another company which was much more professional.

We called Chris based upon a positive experience in the past to do some repair work on one of our rentals. Unbeknownst to us, Chris subcontracted the work to someone else who then brought in an unexperienced kid to do the work. They ruined everything they touched. Everything had to be completely redone and the $700 in materials we purchased was all wasted. Contractors we brought in later to clean up their mess strongly suggested we turn them into the contractor's board, it was THAT bad. Throughout the whole experience, Chris provided us with nothing but excuses, never took responsibility for what went wrong, blamed other people (including my tenants) and outright lied. The best was when, even after we paid him $1500 to "cover his expenses", we got sent a bill from the plumber. When we called him out on it, he sent the following response: "It was my understanding we had an agreement at $1500 to be done with everything we did on this project and that was because everything we did went wrong for one reason or another. As far as I'm concerned the toilet installation was the one thing that was done right . . . If you want to split their bill I would be willing as a matter of good faith with you . . . but it's my opinion it really wasn't our responsibility. . . Therefore it was not our bill. If you disagree let me know and I'll split it, but not because we are taking responsibility for it." Stay FAR, FAR, FAR away. I cannot say enough bad things about this whole experience and my dealings with them.

Vendor was not liscensed or insured but claimed to be. Work was unprofessional. Vendor used no primer but painted raw wood with poor quality paint. Instructions were very clear on required process. Vendor attempted to bill customer for additional work not requested. Very poor experience for all concerned. Work sight was a condo neighborhood and the work was contracted by a HOA that had to hire another painter to repair the flaking paint job.

Description of Work
Prepare and painting of wood fences.

World Flooring has been proudly serving the Harrisburg and surrounding areas for 20 years and counting! We specialize in carpet installation sales and repair for both residential and commercial. We also specialize in hardwood, laminate, luxury vinyl planks, and vinyl sales and installation. No job is too big or too small and we do the job right the first time, every time! Give us a call today for your free estimate, you will be glad you did! For that complicated area, we also offer design consultation at no additional charge  …

Experience the difference at Fullmer Home Finishing & Design. We pride ourselves in taking care of every customer from start to finish and do so at affordable prices. Creating unique, inviting and fresh new spaces through accent walls, fresh paint, flooring, home projects or much more! You will enjoy our extraordinary customer experience from our first conversation to the "see you next time!". We look forward to delivering the highest standard of quality and service for your project. We aren't just here to put paint on the walls or to install a new bathroom, we're here to make sure you are satisfied during the entire process and to make your home comfortable and inviting. You have plenty of options to choose from, but Fullmer Home Finishing & Design prides ourselves on the customer experience, quality craftmanship and 100% transparency throughout the project.  …

With over 25 years of concrete experience, we specialize in pool deck and concrete patio maintenance restoration and repair. We are a family owned and operated business. Please give us a call at 717-385-1319.  …

All statements concerning insurance, licenses, and bonds are informational only, and are self-reported. Since insurance, licenses and bonds can expire and can be cancelled, homeowners should always check such information for themselves.To find more licensing information for your state, visit our Find Licensing Requirements page.
General Information
Free Estimates
No
Eco-Friendly Accreditations
No
Payment Options
Check
Senior Discount
no
Warranties
No

ClearView Property Services is currently rated 1.7 overall out of 5.

No, ClearView Property Services does not offer free project estimates.

No, ClearView Property Services does not offer eco-friendly accreditations.

No, ClearView Property Services does not offer a senior discount.

No, ClearView Property Services does not offer warranties.