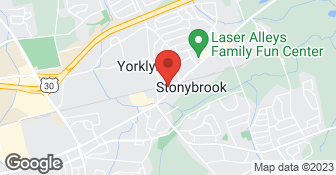 We are pleased with price and materials - The windows are high quality and meet expectations. The windows were installed properly but the installers were not cooperative with answering questions and meeting requests. They were to do the job in one day but had to leave early due to an personal appointment and had to come back the next day to finish the job. Clean up was not complete. No one from the main office contacted us at any time during or after the installation to check on the job.

They replaced four double-hung windows, replaced window caps, downspouts, a gutter, garage screens and a back storm door. They did a wonderful job, and they were even willing to come back and change out the hardware for me.

Description of Work
They helped fix hail damage to your house, it was an insurance claim.

True professionals and the quality of work was excellent. Perfect clean up, on time for the 3 days. I did not have to call them back for anything.

Everything went fine we just found a different excellent replacement window at a better price. Amerex did appear to be an excellent company with an excellent product and warranties and services. I would consider them for other projects in the future.

Unfortunately if you have problems, their and quot;warantyand quot; is useless and they promise to do things but then never show up. This has happened twice now. Same issue. This problem has been resolved and it was more a misunderstanding than anything else. Good company...good product and good dependable workers.

Description of Work
Amerex sells a good product and has good installers.

I called Amerex for a quote for a replacement window for my condo. This company was recommended by the HOA president, who said they had done replacement windows for other homeowners in the development. The issue I had with the existing window was a vapor seal failure, resulting in a cloudy residue on the inside of the glass. I spoke with a gentleman who was familiar with the homes in my development and he provided a reasonable estimate (much less expensive than either Window World or Windows and More, neither of whom could provide an exact replacement at a reasonable cost). Now here's the kicker. The Amerex representative then suggested that I contact a glass company to see if they could replace just the sealed glass portion at a lower cost. He named 3 companies in my area that might be able to do the work. I did contact one of the companies, they came out and did an estimate and replaced the glass at about 60% of Amerex's already reasonable cost. Who does this kind of thing? It was like living out a moment from Miracle on 34th Street (and quot;go to Gimbalsand quot;). Well, like the lady in the movie, I am grateful to Amerex, and should the time come when I need actual replacement windows, they are now at the very top of the list of companies I will contact!

I would strongly suggest you get everything in writing from this company before they order any items for you. They don't give you any contract setting forth exactly what you ordered so you take it on faith that what you asked for is what you will receive. If you don't get what you expect as happened with us the quoted price magically increases and they quote item numbers to you as if you have any idea what the item number would be for any individual product. You assume that the salesman ordered what you expressed to him that you wanted and since they don't put it in writing you are screwed if you don't want to pay the price increase. They will try to appease you with a bit of money off if you keep the wrong items. This is their and quot;compromiseand quot; which still results in you not having the items that you thought you were purchasing. Just not worth the hassle to fight with them. BEWARE and get everything in writing to make sure you get what you expect. The installer was prompt and completed the job in a timely and professional manner. I was very impressed and pleased with the installer. It is a shame that this situation arose as we previously purchased replacement windows from them and were very pleased.

First let me say that I am sorry that you were not happy with your purchase. Our primary goal at AMEREX is to leave a job with a happy customer. When we sell doors, we use a very thorough program provided by our manufacturer that helps us design the door. It lets us select the style, color, options, and size, essentially everything from A to Z. And it lets us do it in the customer's home so they can see the door as it is designed. It makes it very difficult to make a mistake. Then we use the results of the software to write a detailed contract and order the door. If a customer does not mention that an option is important to them, there is no way for us to know that. If you would like, I would be more than happy to go over our software program with you again and show you the exact door and options that were chosen. If you don’t have your copy, I can also provide a copy of the signed contract detailing the door you chose. As for the minor discount we gave, it was the amount requested by the customer. We feel it was more than generous as we provided the exact products and services agreed upon. Again, I am sorry that we did not meet your expectation and would be more than happy to discuss this in the future.
4.0

Called Amerex upon recommendation from a family member.Salesman did in house presentation and quote which was honored up front. Answered every question patiently and thoroughly over the next several days as I compared to other installers and their product. Not being an experienced do-it-yourself person, I based my decision on the perceived quality of the product itself (what I felt was superior construction of the sliding door in particular) and the description of their method of installation. We could have had the job done more cheaply but felt Amerex was selling a good product with a better installation.Could not ask for more on the installation. The two installers were tolerant of my questions, let me take pictures of the process, took away all the old windows,and made sure I was satisfied.Only negative is that there was no follow-up whatsoever. I even sent disk copies of the pictures taken and received no response. Not very professional. Now, amost a year later we are still very pleased with the windows/siding door so as long as everything holds up I suppose I don't need a thank you but it would have been appreciated!

Description of Work
9 windows and one sliding patio door installed.

The windows were installed a day before our Halloween party and they replaced 8 windows in less than 6 hours and they look great. They cleaned up the mess and were very courteous. We later had our roof replaced and it looks great. I would definitely recommend this company for window and roof replacement. They also offer financing which really helped out. From my experience, not to many small companies offer that.

Description of Work
We had our VERY old windows replaced and also had our roof replaced.

Amerex is an outstanding company. The work is perfect. I wish Amerex could do all of my home improvements! Call them.

Description of Work
Amerex replaced a window that was roughly 70" x 90" and our roof. Amerex is an outstanding company for the following reasons: 1. Competitive price. 2. Follow code. We have a ceiling to floor window. While other bidders stated that we did not need tempered glass, this company followed code and said we did need tempered glass. (Our glass goes to the floor. We NEED tempered glass.) 3. High quality workmanship. 4. Work space is left clean (Example. They were careful not to damage my flower bed in front of the big window we had replaced. They left no trash or debris. The house was clean.) 4. Once the job starts, the work is quickly complete. 5. We had several rooms in our house that leaked. I called Amerex and Steve came out within an hour. He basically did a home inspection to figure out the problem. He spent over an hour helping curb the incoming water. 6. The new roof was completed in 2 days. Looks great. 7. When we had a leak in the house, Steve immediately came to determine the problem. IT WAS MY FAULT. My gutters needed to be cleaned. While on the roof, Steve cleaned ALL of my gutters. This is above and beyond the call of duty.

The King Gutters Cleaners, - Locally Owned And Operated. We Offer Free Estimates And Believe Fair Pricing, Value, Quality, And Ethics Are The Only Way To Run A Business.  …

AMEREX American Exteriors is currently rated 4.3 overall out of 5.

No, AMEREX American Exteriors does not offer a senior discount.

Are there any services AMEREX American Exteriors does not offer?