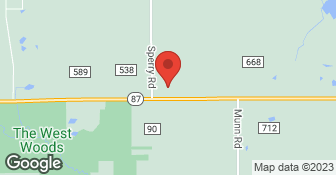 The work was and is being accomplished promptly and professionally. Note that Osbourn's prices are quite fair, and I don't believe that good to excellent quality plumbing (and any other contracting work) can be done cheaply.

Description of Work
I had consulted Osbourn for an estimate on plumbing upgrades for an extensive home renovation. They were thorough and informative. Shortly thereafter, 2 problems arose which needed prompt attention. 1. A water pipe was torn by the outdoor deck installers. Osbourn repaired this successfully within 16 hours. 2. We determined that the washing machine pipe did not have a trap, necessitating cutting into the concrete slab on which the house rests, to create a trap. This work is being done currently.

I called in the morning and they came in the afternoon, exactly on time, and with a call 15 minutes before to confirm. They did what they could for our two old toilets, which are working better now. They also advised that we would need to replace them sometime soon, and gave some advice about that. Professional and they did what was needed. The price seems a bit high for a half hour's work, but no complaints about the service.

Description of Work
Fixed two toilets that were not flushing well.

It went well. They did a very nice job.

Description of Work
They came out to fix a leak in my bathroom sink.

We got an appointment two days after we called, and the repair was made professionally and on time. We also asked about some other plumbing issues in our house, and received helpful information.

Description of Work
Replaced a broken valve under the sink for the dishwasher.

They came right over to look at this. I've used them in the past. While their prices are on the higher end, I trust them and like that they're local. Theodore is very professional, knowledgeable and dependable. They will come right out.

Description of Work
They put in a new shut-off valve in the basement. The work didn't take long to complete.

Description of Work
Installed a new faucet in a bathroom sink, and did a few other minor repairs to a toilet and washing-machine shut-off valve. | |The technician did the work promptly and fixed the problems. He had us buy a new faucet ourselves, which was good since we could choose exactly what we liked. We have always had good service from them in the past, and this experience was also good.

All they did was connect some tubes, and they charged me $500.00. They did not do a good job. I wanted an estimate from the beginning, and they could not give me one. Then, it ended up costing me way more than I expected.

Description of Work
They did some plumbing for me. Initially, they were reasonable, but the second time they jacked up the prices.

Description of Work
Actual work was fine, although they applied more manpower than the job needed (and charged for it). Very high priced!

Our drains backed up into our basement at 8am, between the clean up and the lact of drainage it was a very long messy day! We called a local company a price, time and reassurance everythig was ok was agreed on. We were told they would squeeze us in, later in the day. At 4:30pm the technician called and informed us that we would have to pay overtime and there was no opening during regular hours the next day. So the bill went from $250 to $850 just like that! SO, we called Osbourn on a whime, they had installed the water treatment unit from the previous owner. The wonderful woman on the other end made an appointment, gave us a price, and timeline. The guys called at 7:30a and were here by 8:15. They went right to work, diagnosed the problem, talked to my husband and whithin an hour they fixerd the problem, cleaned up and were on their way. The guys were nice and it was so nice to be treated well.

Description of Work
Diagnosed the blockage and snaked the main line from the septic into the house.

Careful job, approached creatively. Final result is better than the product that we had asked to have repaired. Very pleased.

Description of Work
THEY INSTALLED PIPES AND OUTSIDE SPICKET.

How is OSBOURN PLUMBING HEATING AND PUMPS overall rated?

OSBOURN PLUMBING HEATING AND PUMPS is currently rated 4.5 overall out of 5.

No, OSBOURN PLUMBING HEATING AND PUMPS does not offer eco-friendly accreditations.