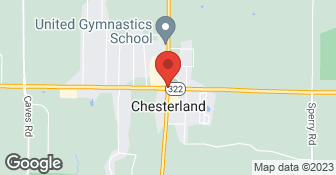 We are passionate about giving our customers a beautiful job. We specialize in commercial/residential asphalt roadways, parking lots and driveways (216) 245-5770 (216)777-0827

Tod was very responsive when giving quote, but no so much when answering my calls for addressing quality concerns. He finally siad he would fix it and never did. Then they have the nerve to keep calling me following up to a quote for sealing. My newly surfaced driveway started cracking in less than a year. Tood said that is because it needs seal-coated which is a totla lie. Furthermore, they did n...

Estimate appointment was prompt. Actual service was a few days late. Then they were not going to dig out by the garage as I was promised by the person who gave the estimate. I had to tell them it was promised and stand and watch them do it. Driveway resurface was not pitched and leveled properly as I still got standing water from the rain immediately following.

DESCRIPTION OF WORK
Had driveway resurfaced

The work that they did was shoddy at best. When they came out to repair it looked even worse. Did not submit full payment until we were satisfied. Which we were not. The owner was rude and obnoxious. He told us that they do not complete work to the customer's satisfaction only to what was on the contract. Do not hire this company.

DESCRIPTION OF WORK
Sealcoat and repair of asphalt driveway

I was over charged, he didn't explain the coating or repairs. He only worked on half the drive way so now I have black blobs in my regular drive way. He wants 5000 more in order to finish the rest of the work. I'm an elderly woman that lives alone, when Todd came to give me a quote he was nice. However, when I began to question his work he became quite aggressive.

DESCRIPTION OF WORK
He ground and repaired the raised and failed areas of the upper part of my drive way.

Advertising signs were placed on our lawn a week before the job was started and the signs were never removed after the job was completed. This was true when they replaced the drive and also a year later when they did the first sealcoating (part of the original contract). I removed the signs myself after a month each time. When estimating the job the engineer said they would have to lower the drain...

DESCRIPTION OF WORK
Replace the asphalt driveway in front of our house with a new one.