No Metal Roof Work: $500 OFF Roof Replacements for ALL Angie's List Members! See our Deals: Shingled, wood shake, and flat roofing specialists. We don't offer repairs. D M RING CONTRACTING, LLC was developed to provide the very best quality products and installation to the consumer. Our team consists of certified, highly skilled and motivated tradesmen; with core goals of ensuring a standardized and quality job is achieved every time. A wonderful experience is what we seek. When our company starts a job, it is worked at appropriate labor levels from start to finish, with no "Job Jumping" in between, satisfaction guaranteed. We have some wonderful references right down the street, who you can speak with and would welcome you to view our work.... 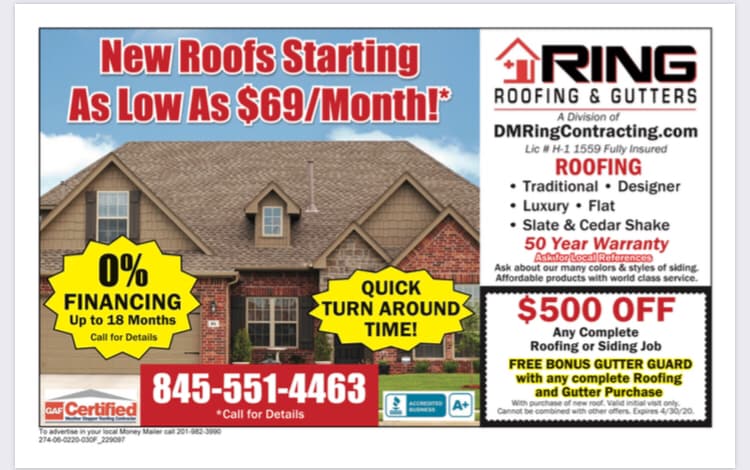 $500 OFF PLUS Bonus Free Gutter Guards …

$500 OFF PLUS Bonus Free Gutter Guards

Work was pro level, so happy with job done. On time and cleanup was superb.

It went great! I will start by saying I never give more than 4 and a half stars, because we all have some room for improvement, although with the crew that showed up it would be hard to imagine how, without knowing all of what their job entailed. They showed up with clean clothes including shirts of the business, the very beginning of quality assurance. The crew foreman, stepped up and identified himself and immediately addressed any questions I had as to what the job entailed and what I should expect for the day and what was going to be done, since the job at my house entailed some special guards since I do have a problem with pine needles. When finished with the job, the crew foreman walked my property to make sure that I was satisfied with the clean up was, and it was darn near perfect. At 72 , I wasn't able to go up the ladder to see that the job was completed by spec, but with the way everything was handled, I don't believe I should expect any problems. Should there be any problems, I won't worry that a problem won't be given the same attention that the whole job was given. I wouldn't hesitate to recommend or use D M Ring Contracting again! Thanks, Dave!

Description of Work
They replaced gutters and installed gutter guards.

great work they were fast and excellent workmanship

Description of Work
flashing on side of house

Just had our roof and gutters redone on 6/16. I'm gonna be honest, I was super skeptical at first, because they quoted us without coming to our home. Not sure how they do it, but it was accurate. We were quoted a few thousand cheaper than our most competitive quotes. On top of that, he allowed us to change from the GFS shingles to the Owens Corning, to match the shingles on our 2 detached buildings. Everyone else who came out said they couldn't get us the matching shingles or we would have to wait a long time and pay more. Dave quoted 7 to 10 days to do the job and they were there in 7 business days, from when we signed the contract and gave our deposit. The crew did an extremely amazing job and cleanup. They were super friendly and answered all of my questions as they worked. Nikki in their office was also awesome to work with. She kept in constant contact with us, through the whole process. She was friendly and explained all the steps! I would 100% recommend using DM Ring for your roofing needs!

Description of Work
Roof and Gutters

Very well. All stages of the process were very efficient. Work was completed quickly and the new gutters look great. Would definitely recommend them.

I wish to thank and commend Ring Roofing & Gutters for the outstanding work just completed on my house. I had never done business with this company before and I knew no one within the company. Nevertheless, having used the “Anji” reference site, I came upon Ring Roofing & Gutters. I picked this company over five other contractors/bidders based upon their website and email presentations as well as their telephone follow-up. Talking to the owner (David Ring) and his partner (Nikki) really made the difference. They were friendly, informative, and helpful. They weren’t pushy and they were willing to work through contract issues at every turn. The price was not the lowest proposal received but it was very fair. The attention to detail was outstanding. Once the job started, Ring’s crew jumped right into the work and kept at it until completed. They went about their business in a serious and professional manner with no messing around. Issues that arose during the job were resolved quickly and to my complete satisfaction. Upon completion, I immediately started receiving same-day compliments from visitors about how the house looked. I am very pleased with the outcome and I will not hesitate to highly recommend Ring Roofing & Gutters to others. Sincerely, David Velazquez Pomona, New York

Very positive experience. Truly a standout out for responsiveness and professionalism. All my questions were answered, thorough explanations of what would be done. I have an old home w a peaked roof and large chimmney which was leaking into house. It’s hard to fully rate quality, time will be the real test on that. But, what I’ve seen so far, the quality seems v good. Highly recommend DM Ring.

Dave sized the crew to accomplish the jobs in the shortest time and the crews worked together seamlessly. The final job looks great and professionally done! Dave is a professional businessman, from the quotation to scheduling and job completion. Communication was excellent! .

We originally went with DMRing because of Dave's thorough explanation of the process and materials. Very reassuring. As far as the job itself, it looks beautiful. The crew were relentless and completely focused. A problem with a repaired skylight was immediately addressed within 24 hours of notifying Dave - despite the fact that the crew had to come AFTER a full day at another site. Very happy we went with DMRing.

David and his team were incredibly professional and replaced my roof and gutters expeditiously. In addition to the great work on the roof, their cleanup was highly attentive, chasing down individual shingles the wind had taken across the yard and offering to toss some of my own landscaping debris into their dumpster. Will hire again.

Fantastic! Excellent work done with care and professionalism, for a fraction of what other roofers wanted to charge! Everything went perfectly!

Description of Work
Roof replaced on house and barn

The team and pros' were amazing. Here when they said they'd be, efficient,well trained crew of workers,did a beautiful job on the roof, careful of all of my flower beds below, tarped the areas where they were working, worked 10 hours/day til they were done - and then did a complete clean up of the property once finished; Roof looks AMAZING. Very Pleased.

Description of Work
I needed a new roof on only 1/2 of my house-as a tree had taken it out.

Excellent workmanship. David was always available to answer any questions. He went to great lengths to make sure all details of the project were to our satisfaction. Work was done in a timely manner. His crew was reliable, worked long hours and when we had a delay in delivery of an item on our end, they came back immediately to finish the job when the item came in. David and his crew performed detailed work that went above and beyond out expectations.

Not only did Mr. Ring come in significantly lower that competitors (for the exact same job, product, and warranty) He called back immediately every time, stuck to his budget, start and end date, and left the place spotless. We’ve dealt with many contractors...he and his crew were simply the best.

It was fine, no problems as expected. They did what they were supposed to do and I'm happy with the job that was done.

Description of Work
They replaced my roof and did some sky lights.

They were efficient and professionals.

It was very good. They did the job on time and looks like it was done right.

It was excellent. David Ring was here everyday. They were hard workers and excellent.

Description of Work
He did general remodeling - roofing, vinyl siding, and stone work. 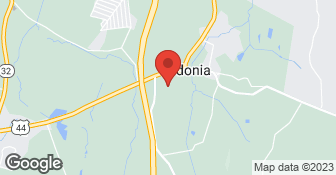 No, D M Ring Contracting LLC does not offer a senior discount.

Are there any services D M Ring Contracting LLC does not offer?