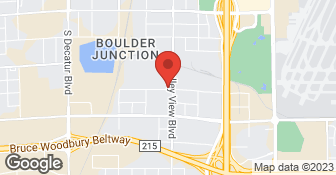 Bella Patio is a fully licensed, bonded and insured company specializing in patio covers that range from customized aluminum to the basic styles of Aluma-Lattice. Adding a patio cover to your home is a surefire way to boost your property's value without spending a lot of money, especially in Las Vegas' hot and sunny weather. All in-home estimates are free....

The salesman was very professional and informative. The project was completed in a timely manner. Payment is not made until the job is completed and the customer is satisfied.

Description of Work
Install patio and laid 300 sq ft of concrete. The finish work was outstanding!!

Tom came out right on time, very nice person. He gave us a the price for the slab and the 47' awing. Tom explained how strong the awing was and about the rain gutters. George came out with his crew to install the awing after the slab was poured. Georges crew were fantastic, they did a great job and very fast and the clean up was great. This the best experience I ever had with a contractor. Keep up the great work Tom. Dale

Overall grade is a fail when the City Building Inspector fails the patio cover. But lets go back and start from the beginning. The price was great, they provided a price that beats all of the competitors. The problem started when they came out to start the patio cover and I asked about the Building Permit after they started and was told that it was on the way. Now, this is 6/16/2014, I found that the permit isn't even pulled that day. It isn't even pulled until 6/19/2014. I don't even get it until a week later and get told that I will get a call when to post the permit for the inspection. In fact, I never get the call and I have to call Bella Patio on 7/10/2014 about the City Permit Inspection. I finally get the City Inspector on 7/14/2014 and guess what - the patio cover fails inspection. Bella Patio has either submitted the plans wrong or built the patio wrong. It is going to be interesting to see how this gets resolved.

Took an extra couple days than quoted to complete but did a great job.

Description of Work
installed patio cover and we love it.

Description of Work
They came to our house to measure and review the project. . We waited but weren't contacted, so we called 3 times and never received a call back and weren't given a quote on the project ever.

Great. Professional, pleasent to deal with, price very fair and competitive. Installed was wonderful and did excellent job. Would highly recommend.

called for free quote . came out two days later quoted best price . liked that they used elite wood which is similar to aluma wood but is locally made . they came out two days later and poured concrete . the following week they put up the patio cover it took about a day. they were neat timely and did a good job , I couldn't be happier.

Integrity is the foundation of our business. We have built long-standing relationships with our customers and vendors through hard work, dedication and honesty. We've layered that with a full range of quality products and services, as well as one of the finest quality control programs in the industry. All those combined have set us apart from our competition. At Royal Flush Concrete, we set high standards for ourselves, and our employees. Our managers are expected to lead by example and to maintain an attitude of professionalism at all times. We feel strongly that well-trained, highly motivated employees are our company’s greatest assets. That is why we seek out people who wish to grow along with us and share in our high moral and business standards. We reward employees who hold integrity, safety and customer satisfaction above all else. We take the responsibility of managing this Company very seriously, as many people depend on our success. We continually seek out opportunities to expand our markets, products, and services while increasing profitability. Since starting our business in 1998, we’ve continued to grow and to give back to the communities and people who have supported us over the years. Bottom line: Here at Royal Flush Concrete we plan for the future to ensure the longevity of the company, for the benefit of all.  …

Las Vegas best turf and paver installers, Rock n Block Landscape. Quality, effectiveness, and good customer service are some of our greatest qualities. We are a company with many years of experience. Our hard work payed off, creating opportunities for us in different states. We currently have crews in Nevada, Arizona, San Diego, Los Angeles, Utah, Texas. You will not regret contacting us and start building your new dream garden. Discounts are also available depending on the size of the job.  …

With over 30 years of experience in concrete we are the BEST choice for all your concrete needs in the Las Vegas area. We are a licensed, bonded and insured contractor and we stand by our work. We give 10% Military and Senior discount. Give us a call for a FREE estimate and see what we can do for you!  …

How is Bella Patio overall rated?

Bella Patio is currently rated 4 overall out of 5.

What days are Bella Patio open?

No, Bella Patio does not offer eco-friendly accreditations.

Are warranties offered by Bella Patio?

What services does Bella Patio offer?