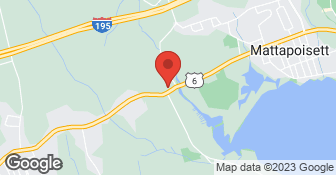 We are a local small business owned by two sisters who grew up in the local area. We have a small team of designers, managers and project coordinators and we work closely with each other on all projects in order to best serve our clients. We are celebrating our tenth year in business this year!...

Emerson Construction is a family owned and operated company with years of residential and commercial experience in Cape Cod and region. We guarantee your satisfaction and won't leave until the job is done right. We pride ourselves on the well priced quality work we provide, while also delivering great customer service! What started out as a painting company, has now grown from experience to do all things remodeling: * Painting * Flooring / Tiles * Carpentry * Siding / Roofing * Window installation * Kitchen / Bathroom * And more! If you need a job done, contact us at (508) 648-8822 or contact@emersoncon.com. We will be happy to give you an estimate.  …

Para Construction proudly serves it’s customers with pride, integrity and attention to the details that matter most to you. This is one of the many things that sets us apart from the rest. We are locally owned and operated. Give us a call today!  …

Onyx Marble & Granite is a small family business, it is very important for us to have satisfied customers. Top Quality and Great Customer Services Are Our Priorities. We serve the entire Massachusetts state including the islands. Dear Valued Customers, We appreciate all the safe healthy concerns and actions that the government and all its agencies are taking in order to resolve this COVID-19 crisis. As a building industry supplier, Onyx Marble & Granite is an essential service for the housing and commercial construction industry and it is allowed to continue its operation. While our showroom will by appointment only , we will continue to provide our quality customer service remotely by taking all orders via email, and then coordinate templates and/or installations. We take the health and safety of our employees and customers very seriously and continue to follow CDC recommendations, such as frequently sanitizing our showrooms, warehouses, and all common areas. In addition, our employees continue to adhere to a protocol of frequent hand-washing, respiratory etiquette, and safe social distancing. Please contact us with any other inquires or concerns you may have. Here are the emails you can use to contact us: jose@onyxgranite.com poliana@onyxgranite.com  …

Initially very well and once cabinets arrived and problems were found in which the design did not match what we paid for and contracted for, it went downhill from there. Owner was very hard to get in touch with and would only communicate via email even though I asked for a phone call on numerous occasions. I finally reached out to the cabinet makers and representative for this region and am getting somewhere with them. The design was beautiful, the planning great but the follow up will not get them our continued business. I have already found another designer that works with the Omega cabinetry folks to fulfill my other orders.

It was the most pleasant experience I've had in remodeling. I have redone various homes over the years. Kitchens, baths living areas the works. These girls were the most professional and pleasant to work with. Everything came out perfect and right on the money estimate. Went over schedule by a week but that had nothing to do with them and their work. I would most definitely recommend this outfit to anyone from small to a whole new house. I have seen their work in many other new homes and they are fabulous in design and details. John Rogers

We expected the cabinets to arrive in May and our contractor had set aside time for the full kitchen installation. Mid May came and after many phone calls that went unreturned, we received a call from one of the owners admitting that they had forgotten to order the cabinets and that they had just placed a rush order on them and they would be available in mid-June. They did not arrive until later June and our contractor had to rearrange his schedule to fit us in. For this inconvenience they gave us a $500 discount. We were nice about it because they had been in the middle of a move and we wanted to be flexible.The cabinets arrived and they did not come close to matching the display we had bought. When we pointed this out one of the owners sad that we should have known that old and new wood don't match and that as they were a custom order, we owned them. They assured us that within 5 years the cabinets would match. We then called, Plain & Fancy where the cabinets were made and asked them about the wood aging. A representative came out and looked at the cabinets and said that yes they would age to look more similar but as the display was over 5 years old they would never truly match. She asked us why we had not ordered the cabinets to match and we said that as far as we understood, we had ordered them to match. She said that there was no record at Plain and Fancy that we had existing cabinets that needed to be matched and had they known this, they would have stained the new ones to closely match the display. However, as they did not know they were supposed to do this and as they were not supplied with a piece of the display to match, we were going to have to just live with what we received or reorder everything from the start, have more delays and pay a much higher amount to cover the cost of new cabinets. In addition, we ordered two glass front cabinets which were in the floor plan but were also not ordered. In the end we reversed the final charge on our credit card, fought with the cabinet company for some money back through the credit card and they ended up walking away with $2000 less than what we had agreed to pay originally. We still have the mismatched cabinets and it has been three years since the installation. They are no closer to matching today then they were when they were installed. In addition, they mismeasured our refrigerator area and our contractor had to recut extra pieces of wood to make it all look right. Overall, we were very dissatisfied with this company. They are amateurs, not real designers. We have since learned from architect friends of ours that it is better and less expensive to hire an actual carpenter to design and install cabinets for kitchens or other places in your house. That way you get cabinets that fit perfectly and match. Never buy a display as it is too hard to match. Also, pay a little extra to have a certified design professional or architect design a kitchen. It costs more to fix mismeasured spaces than it would to get it done right the first time.

Description of Work
We had a bathroom and a kitchen designed by this company. We were initially so pleased with the bathroom that when we saw that they were having a moving sale we decided to buy one of their display pieces and design our kitchen to match that piece. We bought the display piece and they designed the kitchen to match. They ordered the cabinets to finish the rest of the kitchen in February- the rest of our nightmare experience is detailed below.

Our goal is to create unique living spaces which reflect our clients individual needs and everyday life. We offer design services for kitchens, baths, etc. and will work with you to create a wonderful space that will function effortlessly. Clients can purchase cabinetry, countertops, Subzero and Wolf appliances, plumbing fixtures and unique cabinet hardware through our business.

We do not paint existing cabinetry but we can offer recommendations for someone that does. We do not sell tile but we do assist clients in selecting tile and paint.