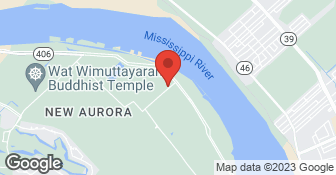 Quality Tree Care Based on Three Generations of Excellence serving New Orleans and the surrounding areas....

I would have used the company if the price wasn't so high, about 30% higher than other Angielist competitor.

Description of Work
I needed a tree removed located in my backyard. The company is extremely polite, prompt, and professional.

Not very well as we were told one branch was okay even tho' it was obviously as rotten as the rest they removed. A few days later, a storm blew through and that particular branch we asked to be removed fell on my car. Tree Man took no responsibility for that. Also, he said the tree was salvageable when, clearly, it was rotten, so I question his experience. I felt as though my money was just thrown away. We had to get another company out to remove the tree that should have removed in the first place.

Description of Work
diagnosed tree and injected with nutrients. then came back a few days later to trim rotten branches.

The crew showed up on-time and quickly got to work. They removed some scrub trees and other vegetation at no extra charge, and the entire job came in a couple hundred bucks below estimate.

Description of Work
Trimming of live oak branches threatening roof of my house. Trimming/removal of other trees.

Excellent and professional service. They came in and within an hour tree was removed and all debris was cleaned up when done

We signed the contract and was told they woul come at 8AM. They were prompt and careful. The work was done with efficiency. They cleaned up and gave us some ideas what tree to plant in its place. I have used them 2times in the past and I would use them again. We had the trunk removed also.

Description of Work
A tree in our backyard was leaning and dying. The tree man came out immediately and found that the tree had a hole in middle and needed to be removed. He gave us an estimate to do the work. The tree was large and near the garage so it was tricky.

would strongly advise anyone not to hire Tree Man. John LeMeur is not honest. I hired Tree Man last year to prune my large pecan tree. Not being an arborist, I didn't really understand the jargon of the contract he gave me, but when he came to my house and we stood in my backyard pointing at my tree and discussing what limbs he would prune back, I believed he would do what he said he would. When I came home and saw what a terrible job he did I called him and he immediately started screaming at me before I could a word out. Obviously he knew that I wasn't going to be happy with the job (I could have been calling because I found one of his worker's wallets in the yard or something but he knew why I was calling) because he became unglued right away. Eight months later I finally got some restitution from my bank after the Louisiana State Department of Agriculture investigated my claim against John LeMeur and found in my favor and cited him for violating minimum state horticultural standards. My credit card returned $450 of the $750 bill I paid. But I would recommend that you stay far away from this man, who is not only a liar and a cheat, but a bit unhinged mentally.

Description of Work
Pruning of my pecan tree. Mr LeMeur verbally told me which limbs would be pruned, and then only cut back the three bottom limbs leaving the tree very lopsided and unbalanced.

I had used Tree Man once in the past on the recommendation from a friend. It went well---had 2 small trees removed and 3 trees trimmed. So I didn't hesitate to call them this time. Two of my trees hang over into my neighbor's yard so John asked me if he could get in there. Talked to my neighbors before he left from the estimate and we set a date that worked for everyone--my neighbor worked later that day but could be there in the morning and I could let them into my yard and go to work and come back when they were ready to leave. I should note that this estimate, for less work was $100 more than the previous visit, but I chalked that up to inflation. Day of: 2 hours after the appointment time I was still waiting for them to show up and received not so much as a phone call. So I called and was told they were on the Westbank at another job and I should just leave my yard unlocked. Which I was unwilling to do. I also explained that my neighbor had to work later that day and we all coordinated this together. John shows up without a crew and works something out with my neighbor and I give him a key to my side gate and head to work. Get home, trees are trimmed but not well...looked like a rough job, not the job he had done last time. But they are trimmed and the yard is mostly cleaned up. The next day I find out that his crew had trespassed on a neighbor's roof to trim one tree (I could have asked permission if I known but no one told me) and then walked on that roof and threw the bundles of giant branches into another neighbor's yard...then trespassed on that property too! While throwing branches they threw them into electrical lines and ripped them from the house causing a power outage for a week as Entergy had to actually come and repair lines. The neighbor asked John to pay for the repair work. John denied this happened and told the neighbor to sue him, despite multiple neighbors witnessing it. He admitted his guys trespassed but that's it. He refuses to take any responsibility for this. Turns out he wasn't here the entire time the crew worked and didn't come to check their work afterward. hence the poor job done on my trees, the damage to the electrical lines and trespassing. I would never use him again and would advise other to avoid this company.

Description of Work
Trimmed 2 trees in my yard.

I was very pleased with the work that was done and will use him again.

The head of the company, John LeMeur, was very good with neighbors that had an oak tree that overhangs our property. And in New Orleans oak trees are a big deal and people are extremely sensitive about having anybody touch their oak trees. Mr LeMeur was extremely acceptive in identifying what he thought had to be trimmed back to satisfy our needs, but to be conservative enough for the tree owners. I would recommend them, they did a good job.

Description of Work
We have been using the Tree Man Inc. They trimmed trees on our property and dealt with trees overhanging from the neighboring properties.

We have 35 years of experience in tree trimming, tree removal, and stump grinding.. We specialize in large and dangerous tree removal... We look forward to working with you and helping you with all of your tree needs. Please contact us for a quote.  …

Premier Tree Service offers full-scale tree pruning and removal services, including: tree pruning and trimming, tree removal, stump grinding, shrub maintenance and plant healthcare. We take pride in our quality of work and treat every project as if it were our own home. We look forward to working with you, give us a call today!  …

Rings Tree Service was birthed out of the tragedy that Hurricane Katrina brought to Southeast Louisiana and the Gulf Coast area. We saw a need and decided to provide affordable tree services to the locals in their time of need. Herewith Rings Tree Service, there is no job too big or too small. Our trained professional team provides every job with the utmost care and professionalism. We provided a wide range of services for all your arboriculture needs. Our services range from tree planting, tree pruning, tree fertilizing, tree support systems, to tree removals. Whatever your need is, our professionals work efficiently and safely to ensure that you enjoy your entire experience. Contact us today to receive a free estimate from one of our licensed Arborist.  …

TREE MAN INC. is currently rated 3.7 overall out of 5.

No, TREE MAN INC. does not offer a senior discount.

No, TREE MAN INC. does not offer warranties.

Are there any services TREE MAN INC. does not offer?