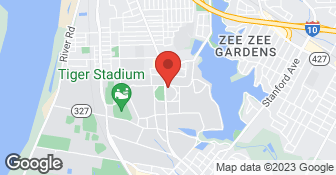 Locally owned and fully insured, Dryer Vents Plus is entering it's 8th year of opperation with over 2,000 clients...

Jeremy was knowledgeable and very helpful. He was able to remove blockage in our dryer vent that we had been unable to remove. We would definitely call him again.

Same day appt, they were on time and very fast. Would definitely hire again.

Description of Work
Dryer vent was stopped up and had come partly unattached in attic at roof. Lint had started collecting on attic insulation.Regular load of clothes took two hours to dry.

Provider arrived within a few minutes of appointment time. I brought them into the attic to show them what I had done up to this point and the symptom (lint accumulation in the attic) that I had been seeing. They made several comments/recommendations as to why I was seeing the lint accumulation in the attic for my consideration. They put the portion of the dryer vent piping that I had taken apart back together. We went back downstairs to the laundry room where they set up to vacuum out and clean the dryer vent piping. Before they began vacuuming, they advised me that it would be noisy for 15-20 minutes. They completed vacuuming out the dryer vent piping, reconnected everything, and put the dryer back in place leaving everything as it was before they arrived. Service took no longer than 60 minutes.

Description of Work
Provider cleaned dryer vent system after I had noticed lint accumulating in the attic. I broke apart and cleaned a portion of the dryer vent piping but could not reach all the areas that needed cleaning.

No problems. The worker took the time to advise us of a potential problem on our roof. We'll definitely use them again next year.

Description of Work
We had our dryer vent cleaned (with a high-powered vacuum), and the service man went to our attic to adjust the vent. Whole service lasted about 30 minutes.

The entire service contract went very well as he performed his services, he advised me on who and what to stay away from in reference to some services I needed performed but he did not offer. Great experience.

Description of Work
The owner of the company promptly came out and cleaned my dryer vent. He also went into the attic and readjusted the vent so that we can receive better dryer performance.

They were on time and very professional. The prices were very fair and they told me up front. They gave very good suggestions about how to make our laundry room safer and I was very pleased with them.

Description of Work
They came out and cleaned out our dryer vents and replaced the caps.

Bonded
Insured
All statements concerning insurance, licenses, and bonds are informational only, and are self-reported. Since insurance, licenses and bonds can expire and can be cancelled, homeowners should always check such information for themselves.To find more licensing information for your state, visit our Find Licensing Requirements page.
General Information
Free Estimates
Yes
Eco-Friendly Accreditations
No
Payment Options
Check, Visa, MasterCard, Discover
Warranties
Satisfaction

How is DRYER VENTS PLUS overall rated?

DRYER VENTS PLUS is currently rated 5 overall out of 5.

What days are DRYER VENTS PLUS open?

DRYER VENTS PLUS is open:

What payment options does DRYER VENTS PLUS provide

No, DRYER VENTS PLUS does not offer eco-friendly accreditations.

Are warranties offered by DRYER VENTS PLUS?

No, DRYER VENTS PLUS does not offer warranties.

What services does DRYER VENTS PLUS offer?