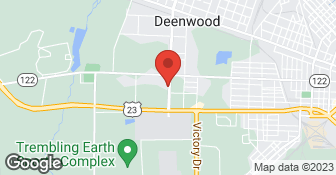 LJA Builders Incorporated was established in 1995 by the owner and General Contractor Mr. Horace Taylor. The experience of this company goes back thirty years in proven work experience.

Description of Work
TO WHOM IT MAY CONCERN, THE SMITH'S WERE VERY DISAPPOINTED WITH THE SERVICE, AND WILL NOT RECOMMEND THEM TO NONE OF OUR FAMILY MEMBERS/ YOU NEED TO TAKE THEM OFF OF YOUR LIST.

Description of Work
I spoke to them about 2 years ago. no call back

Description of Work
i contacted the ceo Mr. Horace Taylor to provide an estimate for a trailor remodel that consisted of installing a vanity in the bathroom, replacing the flooring throughout the entire house, replace base cabinets and countertop in kitchen, install kitchen sink, install three ceiling fans, two interior light fixtures, two exterior light fixtures, replace front and back doors, remodel front porch to make safe, remove wall ac unit to aquire more square feet. This was on June 22, 2015 and he said he would be able to start on July 1, 2015. He said he would contact us within 72 hours with a proposal to sign. After one week we had not heard from him so we contacted him and the conversation was him giving us excuses. He said he would be able to start on The 6th of July. He arrived at my house with a worker on the 5th to show him what needed to be done. The following day the worker showed up with another worker. Come to find out they didn't like Mr.taylor very well and said they were hired as a helper. Not to do projects. They told me they were underpaid and that Mr. Taylor hasn't paid the in several weeks. They ripped my floor up and went home. Due to my floor being ripped up I had to stay in hotel for the safety of my children for almost two weeks. Mind you, I was told by Mr. Taylor that my floor and the entire inside would be finished in one weeks time. It was never finished. The first week he said he would be there everyday. He was not there at all. He would never communicate with me. I had to almost track him down to figure out his plan. After the first week he fired his two workers. We had a talk about him not fulfilling his word about having the inside done and he hit me with more execuses and said it was our fault because we kept changing things. The painters that he fired were unskilled who told us that they had never painted before. They got paint on the floor, sink, ceilings, light sockets, dishes, bathtub, toilet, weight scale, base boards, trim, table, ac vents, and doors. Everything that was damaged he expected me to pay for it which I refused. He left wall outlet wires exposed, a hole in my ceiling, my toilets came of the ground and is leaking, he didn't do the porch, the fans, the light fixtures, half of the flooring was done wrong, they scuffed up the new paint job throughout the house. The damaged the screens on my porch. They left a Sheetrock panel exposed with screws and electrical wires. They pulled the back skirting off of my trailer and left it in a pile along with, the flooring, the old countertop, base cabinet, base boards, sinks, cut wood, and garbage from there food. They did not clean up after themselves what so ever. He spilled paint and caulk on our new floors in every room. I have thousands in repair. He called me at 9 pm accusing me of talking about our business in front of his workers. He was rude. I called him the next day to see what the plan was for work and he was incredibly rude and hung up in my face. We then fired him. The proposal I signed was two pages long. He told me I would get a copy in the mail. When I received the copy, there were two pieces of paper behind the proposal that he slipped in about legal protection for him. He never reviewed it with me when I signed the proposal. That is completely unethical. This man is a crook. After we fired him he continued to harass me for the remainder of the money. He had already received 75 percent of the money for 50 percent of the work. The work was substandard and has cost me thousands to replace. Even his skilled workers the second week were trash talking him. Saying they were under paid and it was always paid late. I don't know how this man is still in business or how he ever started a business in the first place. This man will take a lengthy amount of time to complete a project if it even ever does get finished. He is full of execuses and broken promises. He is completley unprofessional and extremely rude. I give him the lowest grade possible and I hope this never has to happen to someone else again. DO NOT HIRE THIS HORACE TAYLOR AND LGA BUILDERS. BEWARE!

It cost us another $30,000 to bring house up to dried in stage. He had been paid to dry in house. When it came time to install hardwood floors we could not because of the unevenness of cement. It took $5000 to correct floor. Building inspector said he was sending report to Atlanta and he would lose his license.

Description of Work
After 5 months house was still not dried in. Shingles on roof were not straight and roof was sagging in places. After inspection it was found the rafters were not plum etc... We had to take shingles off, realign rafters and other things and purchase more shingles...

Alpha Foundations in Florida & Southern Georgia is a full-service foundation repair company specializing in residential, commercial and industrial foundation services, we also provide crawl space repair and concrete lifting & leveling services all throughout our Florida and Georgia service area. Contact us today for a free estimate!  …

Our company is equipped to handle any contracting job no matter how big or small. We over services from carpentry,facilities maintenance,and electrical to bio-medical instrument repair so just give us a call.

LJA Builders Inc. is currently rated 1.1 overall out of 5.

No, LJA Builders Inc. does not offer free project estimates.

No, LJA Builders Inc. does not offer a senior discount.

No, LJA Builders Inc. does not offer warranties.

LJA Builders Inc. offers the following services: Our company is equipped to handle any contracting job no matter how big or small. We over services from carpentry,facilities maintenance,and electrical to bio-medical instrument repair so just give us a call.