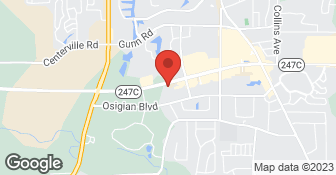 Locally operated flooring company who serves all your carpet, vinyl, LVT, Ceramic, Marble and hardwood needs. Our experienced professionals will provide you with the best advice and knowledge, come visit us today!...

Process was rough from start to finish. One wood install crew came out multiple times to install flooring in 2 large rooms, 2 hall ways, closets, and pantry. They installed light oak colored transitions on some areas and dark black colored in other areas, floor is a walnut or dark brown. Job drug on for months due to transitions coming up/unglued. Hall way had to be repaired due to transitions being re-glued so many times.(That's what the guy who was running the show said to me.) And the repair the boss of the wood floor crew did looked like crap. I had to hire a guy a few months after that to re-do that area. Several transitions were not seated properly. One was actually stuck mostly to my kitchen floor. Area in the hall needed more glue, it was spongy. When they ordered the 2nd set of transitions, they got the same wrong color. They scratched/gouged my existing 20 yr old wood floor in the foyer, scuffed walls, and other minor stuff. I also got floor store to put vinyl in my master bath. One guy comes out. Damages my waterline to toilet, re-installs and splits 20yr old 1/4 round and covers it with caulk. He left me with lumps under vinyl, then comes out to fix it. Left cuts in new vinyl. 2nd guy comes out to remove and replace it. He leaves and a section is making a sticky noise, its not bonding to slab. He leaves job not complete because he didn't bring cutting tool for transition. the one that was already cut, he glued it with white caulk. He didn't bring glue for wood either. And, yep, more white caulk on my baseboard. Good bye Floor Store. Had to file complaint with BBB.

Description of Work
wood flooring and vinyl purchase and install

Description of Work
delay with the product delivery even though when ordered inventory showed flooring was available. This caused the job to take a minth to accomplish.

Description of Work
He installed laminate flooring and carpet throughout the entire house. Approximate cost $2,100.

Description of Work
They came out to do estimate. He said would have it worked up by the weekend. My husband went to store on Saturday, estimate still not ready. Its been over 30 days still no estimate.

[member name removed], We did not realize that you haven't received your proposals. When we spoke with your husband that Saturday he asked us to email them to him. The emails we have are dated for Feb. 2 to his email address, We will contact you to make sure we have the correct information and forward the original emails to you.We apologize for this inconvenience, but we ask anyone who hasn't received their proposal to please call the store to make sure we have the correct information. Sometimes it's simply the email didn't go through and needs to be resent. Sincerely, The Floor Store
5.0

Thank you for your trust in us and than you for the positive review.
5.0

The man did what he said he would do. First class installation that met my needs, and on time

Thank you for the positive review!
3.0

It was all right. It took them a few times to get it right but they took care of it.

Description of Work
They did carpeting, tile and laminate flooring.

We are always grateful when we receive any feedback about our company. We are regretful these good people were less that 100% satisfied. Their valuable input has made us better and reiterated a strong resolve to ensure complete customer satisfaction.
2.0

Description of Work
We went to their store and asked them if they carried the flooring that we were looking for. They wanted to get a sample from their other store to compare with what we already had. They were to call us when they got the sample. After a week when we did not hear from them, we called back. They had "just received the sample". They came out and measured and gave us an estimate. We compared their estimate to another contractor and decided not to use them because they were $600.00 more than the contractor that we used.

When this customer shopped our store they aggressively negotiated a substantial price reduction. For the product and services offered an additional discount of $600.00 was impossible. For another “contractor” (as described in their review) to reduce the price we provided leads us to believe one of the following scenarios: • The new “contractor” was an individual and not an established retail business • The products offered were not identical • The services offered were not identical as what was proposed by The Floor Store • There was some other way to reduce the costs of goods or services thereby reducing product or service integrity • The “contractor” lost money on the job The Floor Store encourages a fair comparison of all products and service pricing we provide. An unfortunate reality of retail is one store wins while another loses; this is the heart of America’s free enterprise system. The Floor Store works diligently on a daily basis to provide superior customer service and value pricing. The Floor Store refuses to sacrifice ANY quality of workmanship because of insufficient funding; we would prefer to not do a project at all if we cannot do it in the way MANY years of experience and MANY hours of training will provide. We gave this customer an EXTREMELY fair price that included absolutely no shortcuts or inferior products. We regret their decision to utilize a competitor however, we are confident our package pricing for this project was one that would have provided a superior finished job. What this customer failed to mention was the outcome of the other “contractor’s” performance. The Floor Store has only one location and has a significant stock of samples for customers to check out. Occasionally a client will ask us to retrieve a sample of a product we do not normally carry and that sometimes will take additional time to retrieve. The Floor Store was recently selected by Robins Regional Chamber of Commerce as February 2014 Small Business of the Month, an honor we are very proud of.
4.0

The job went well. Were professional, performed the job up to expectations and on time.

Description of Work
Had carpet replaced in 3 rooms, 2 hallways, and stairs.

The customer was a pleasure to work with. Was accommodating and knew what he wanted.

Replace My Floors and More

We offer quality installation of hard surface flooring for the middle Georgia are. 12 years experience with one on one consultations, owner operator Robert Brewer will work with you directly through the duration of your project.  …

We offer flooring installation for Laminate ,LVP, LVT, Ceramic , VCT, snap together and most hard surface flooring. Been installing for five years and would love to install floor for you!  …

How is The Floor Store overall rated?

The Floor Store is currently rated 3.9 overall out of 5.

What days are The Floor Store open?

The Floor Store is open:

What payment options does The Floor Store provide

No, The Floor Store does not offer eco-friendly accreditations.

Does The Floor Store offer a senior discount?

No, The Floor Store does not offer a senior discount.

Are warranties offered by The Floor Store?

No, The Floor Store does not offer warranties.

What services does The Floor Store offer?