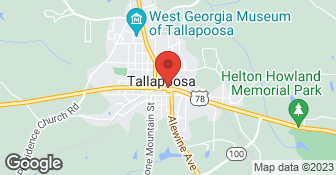 D.L. Services is a full Service company. I Plan to Provide Complete Satisfaction. We Commit to our Clients needs and quality work!

My neighbor needed his retaining wall replaced. I wanted to add on to his to go part way across my back yard. David suggested he go all the way across my back yard and move the retaining wall out about 6 feet from my level ground and remove some trees. These are the hardest working men I have ever seen. They worked from 7:15 am to 6 pm with 30 minutes for lunch. They were prompt, courteous, friendly. The run off between the houses was eroding my lot so they build a small dam across the area between the houses, put in a box with grate and an 8" pipe to run the water under the retaining wall and out toward a stream at the back of the property. They tied the existing buried pipes draining gutters into that 8" pipe They dug holes for new plants, scattered seed below the wall, and sodded the entire back yard and some of the front. I was very pleased and would use them again and highly recommend them.

Description of Work
Put in sod and replaced driveway. Damaged my neighbor's property and said that they would reimburse/address and did not. Not trustworthy.

They were great. Scheduling was great as well. They were prompt and had it done in a week's time. Cleanup was good. David was pleasure to work with.

Description of Work
They installed a new retaining wall and removed the old one.

Never met a more honest better owner and his employees. Never once asked for more money due to the obstacles we came across. David is fantastic. If in Acworth you are welcome to come see their work.

Description of Work
They took down about 100 trees roots included. Built 2 retaining walls of about 180 feet total, moved two sheds (not easy), expanded my parking in driveway with clearing area, leveling and putting rock down. Soded my entire back yard and built a firepit focal area.

Description of Work
They prepared an area to stop water from draining into our newly built outbuilding.

I emailed DL Services to get a quote on some work I wanted done on my property -- A decent amount of excavation, a retaining wall put in and sodding to be done when completed. David Britton and his wife came out and talked to me for about a half hour about what I wanted done -- They were very helpful and explained the plan and how things would go. I got a quote from him a couple days later. DL Services was one of about 6 quotes I got. His price wasn't the cheapest of the 6, but it was close. Without naming names of some of the other landscaping companies, I met some shady people -- some of which I wouldn't even lend ten bucks to, let alone give a big (big for me, at least) contract to. I got a much better feeling from David and Linda than I did from any of the others. We agreed on a price, and set a date to begin work. David and his crew (varying from 2 to 5 people) worked over the period of about a week. He was very honest and up front with me throughout the process and was cool and adaptable to problems as they arose -- we had some unforeseen issues (negligence from the 811/call before you dig people, and a school-bus sized granite deposit in the middle of my yard) but David and his crew continued the job and the end result is something I'm really happy with. I would highly recommend David and his team for any light or major landscaping projects that you want to contract out.

We have the experience and dedication to get the job done right! Specializing in lawn and tree services; We guarantee your satisfaction, and we won't leave until the job is done right. We pride ourselves on the quality work we provide, while delivering great customer service! Call or click for your FREE estimate today!  …

We have the experience and dedication to get the job done right! Specializing in Excavating and Land Clearing services; We guarantee your satisfaction, and we won't leave until the job is done right. We pride ourselves on the quality work we provide, while delivering great customer service! Call or click for your FREE estimate today! *You may also reach us at: (256) 624-8545  …

Insured
All statements concerning insurance, licenses, and bonds are informational only, and are self-reported. Since insurance, licenses and bonds can expire and can be cancelled, homeowners should always check such information for themselves.To find more licensing information for your state, visit our Find Licensing Requirements page.
General Information
Free Estimates
Yes
Eco-Friendly Accreditations
No
Payment Options
Check, Visa, MasterCard
Warranties
Yes

How is DL Services overall rated?

DL Services is currently rated 4.6 overall out of 5.

What days are DL Services open?

No, DL Services does not offer eco-friendly accreditations.

Are warranties offered by DL Services?

What services does DL Services offer?