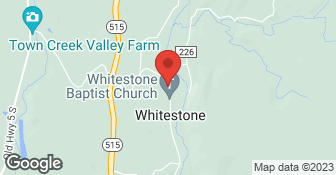 Description of Work
does bad work.does not back up his work.

Approximately 10 months after Anthony Chumley and his crew installed 4, 8 foot walls and sheetrock, all walls he installed formed cracks at the ceiling and wall joints. Other walls that were not installed by Anthony that adjoined his installed walls had no cracks at all. Mr. Chumley refused to honor his one year warranty and not repair the walls stating that he believed I was trying to pull one over on him. I don't know why anyone would intentionally crack their walls in a finished room and want someone to come back and tape and mud again and then to have them sand it again!???? Price - Reasonable price but he charges 650 dollars a day for four guys, even if 2 or 3 of them are standing around if there isn't enough work and if Anthony actually does any work, its even more Quality - Very poor sheetrock installation. There were very ugly bumps and cracks in the wall where they joined two walls together. Cracks formed in ceiling and wall joints 10 months later. They left the job with all the sheetrock dust on the floor and in the air, Responsiveness - It will take several calls to get Anthony to respond to your calls or show up to your house when he said he would.. If its about money though, he will be right there Punctuality - His crew will show up on time, as long as its not raining. If he does an interior job for you, you will only see him if its raining. Professionalism - Anthony starts out as a professional, then it all goes downhill from there.. His son actually makes all the decisions

The members complaint is not entirely true, I told him i was running behind on a job currently working on but i would be there as soon as possible. He attempted to do the repair himself which voided our warranty for the work we did. He repaired the crack with caulk, and asked me how much it would cost to fix his botched repair job, to which i replied 100.00, i was referring to what i would charge to fix what he messed up. Never did i agree to pay 100.00 on something he messed up that if left alone i would have repaired at no charge. It would have fell under the warrenty and have never had a problem before. I would have gladly fixed his mistake for the 100.00 discussed. He was upset because he voided the warranty by attempting to do the repair himself.

We guarantee your satisfaction, and we won’t leave until the job is done right. We pride ourselves on the quality work we provide, while delivering great customer service. Check out our services offered and call or click to schedule an estimate today! 706-973-8489  …

Superior Construction Co. is currently rated 1 overall out of 5.

No, Superior Construction Co. does not offer eco-friendly accreditations.