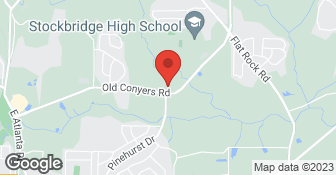 We are a general contracting firm with over 35 years in the business with experience in commercial, residential, and industrial. We specialize in framing, trim carpentry, and architectural woodworking. Our company can help you build your project from permit to finish.

Positives: * Paint looks good overall. * The job was completed in a reasonable time frame. * Price was mid range of quotes recieved. * They were courteous and friendly during the repair. Negatives: Prior to the contract I was asked to be home for the painter to inspect the house. I changed my schedule to accomodate and he didn't show. After the doors were replaced the front door could not be locked for two days, On the third day they chisiled the bolt opening out and it locked ok but I noticed the bottom screw missing today and there is only a small amount of wood for the screw. ( a longer screw will be neccessary to get beyond the void. The back door knob would only turn the bolt in one direction. They sent a technician out, and it worked for a few days after he tweaked it, then the same thing occured. They sent the same technician (after I called several times and waited several days) to replace the door locks. Worked ok for a few weeks but the deadbolt now won't align and latch on the rear door. They got a drill into a hot water pipe while installing the siding. They went and bought pvc and suspposedly repaired the pipe. A few days later I noticed water coming out the bottom siding board and discovered the hot water had filled the concrete block foundation wall and leaking. They sent plumbers to repair but refused to pull the house board and restore it to original, Now when I replace my sink cabinet I'll have extra plumbing expense. The siding was improperly cauked (skimmed over and not filled) in numerous areas. They sent a man by after five and he didn't have a ladder, He thought he would be caulking inside and wouldn't need a ladder or daylight. He caulked what he could reach from ground level and didn't show up the next day. After I called again he showed up with a helper and caulked all open joints as needed. The joints he caulked are still good, however additional joints from the original skim job have opened and will have to be caulked. I called today to seek further repair on the caulking and door issues and was told off in no uncertain terms, I couldn't get a word in edgewise to state the problems. So much for the one year warranty He invited me to sue him! Maybe I will, but I'm definately reporting him to the BBB.

It went fine. They do good quality work.

We do interior and exterior painting,no job is to small from one room to whole house. I have been in painting for 15yrs and I'm owner-operated. We will try to work with your budget. Free estimates.  …

Bonded
Insured
All statements concerning insurance, licenses, and bonds are informational only, and are self-reported. Since insurance, licenses and bonds can expire and can be cancelled, homeowners should always check such information for themselves.To find more licensing information for your state, visit our Find Licensing Requirements page.
General Information
Free Estimates
Yes
Eco-Friendly Accreditations
No
Payment Options
Check, PayPal
Warranties
Yes

We are a locally owned and operated company that values honesty and integrity and treats your home as if it were our own. We offer a variety of general contractor home improvement services that are customized to each individual project. We specialize in major additions and remodels but also offer a wide range of expertise for a variety of other projects. We pride ourselves on the quality of our work as well as our commitment to outstanding results.

How is R&S Construction overall rated?

R&S Construction is currently rated 3 overall out of 5.

What days are R&S Construction open?

No, R&S Construction does not offer eco-friendly accreditations.

Are warranties offered by R&S Construction?

What services does R&S Construction offer?

R&S Construction offers the following services: We are a locally owned and operated company that values honesty and integrity and treats your home as if it were our own. We offer a variety of general contractor home improvement services that are customized to each individual project. We specialize in major additions and remodels but also offer a wide range of expertise for a variety of other projects. We pride ourselves on the quality of our work as well as our commitment to outstanding results.