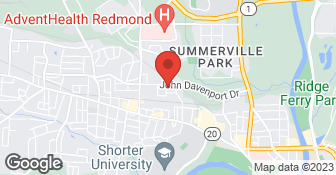 Moody Heating and Air Conditioning offers heating, air conditioning, indoor air quality and commercial HVAC service to Rome, GA and the surrounding area.There is a reason that we are the company your neighbors trust and use. Our installation, repair, replacement and maintenance services are top quality. Contact us today to schedule your HVAC service in Georgia....

Callisons Heating And Air is here to get the comfort you are needing to heat and cool your home. We specialize in service, installations, duct cleaning, water heaters and much more. We are family owned and operated locally to ensure that every customer is 100% satisfied for their needs!  …

6 months NO payments for any HVAC System Install!! Here at Aireserv of Rome we thrive on integrity not profit. We are here to diagnosis and fix all of your Heating and Air Conditioning needs. From indoor air quality to new construction we have you covered. Give us a call today for all your HVAC problems!!!!! Financing Available!  …

A nice man from Moody came on time as promised and checked our airflow inside and then checked AC Unit outside and said the AC Unit was very hot and the coils need to be cleaned , so he proceeded and I also asked him to check the freon , which he did and he said that it needed some....I asked him how much will it cost.....coil cleaning $50....1 pound of Freon $40 .....and for his labor $65.....so I told him to do the job.....he was done within an hour....so now we wait and see if it starts getting better....one good advice though....never cut grass or weed wacking near or around AC Unit....turn AC Unit off....the fan draws debri into the coils

Description of Work
We had a stuck gas value on our furnace. Employees were courteous, and explained the "ins and outs" of our furnace.

When they finally did arrive, they did fix my AC unit very quickly. They knew right off the bat what the issue was, and it was fixed in no time. My only issue was the lady on the phone and timeline. It was a very frustrating experience!

Description of Work
When I called to schedule the appointment, the lady on the phone seemed very annoyed. She said that they would be out at a certain time, and they did not show up on that day at all. The next day, I called in the early morning, and the same lady claimed that they would be there by noon. The guys did not show up until 4PM. It was ridiculous. I had to miss an entire day of work because they were way late and did not call at all to let me know they were behind schedule.

The worker was polite and on time.

Description of Work
Moody was called in to work on the ductwork for the exhaust vent. It went great. Timely and precise.

David Moody quoted the job on May 28th 2012. Assured me, in writing the he could complete the job in "two weeks give or take a day." He further assured that I would not be with AC for more than 12 hours during the replacement. On July 17th, seven weeks after the quote date, and with no communication from David Moody, I called him to express my displeasure. He assured me that he would get to the job on the next day, which he did, at approximately 6 PM. Two young men worked in my house until after midnight on that day. The next day was a repeat of the same except the upstairs unit was left not functioning. On the next day, Friday, one man showed up at the usual 6 PM, told me that he need to work about 45 minutes to get the upstairs unit working. He worked for the 45 minutes but left with the unit still not working. After 4 days in above 100 degree July heat, relentlessly leaving messages on both numbers that I had for David Moody, I was forced to contact another HVAC company to come get the units working properly at a cost of $2000.00. Subsequently, David Moody refused to negotiate his contract price and filed a legal action on me for breach of contract. What a mess, don't ever use this guy!

Our company did install a hvac system for the customer at his home. He did experience a problem with the upstairs unit, but instead of calling our business number over the weekend and leaving a message on our office machine where we check messages and take service calls, he insisted on only calling what he thought was private cell phone numbers for David Moody and one of the installers. David was out of the country during this time and if the customer did call his number he would have gotten a message stating that he was unavailable until the following week to please call the office for any problems or service calls. He did contact the customer as soon as he knew there was a problem. The customer refused to let us come and take care of the problem and finish up what little was left of the job. We contacted him as soon as we got back into the office the following week to try and work things out again. David offered to let the customer take out the amount that he paid the other company to finish the job from the total cost of the job - he thought this was only fair. The customer's reply was that he wasn't playing that game, that he knew what the equipment cost and he would pay him for that only. David told him that we would not be able to do that and would have to turn it over to our lawyer. He told us we could lawyer up if we wanted to and quote "I've got more money than you'll ever have and a better lawyer". We tried again to work out payment with the customer before we went to court, he again refused. When we went to court the judge was told the entire story from both sides and the customer was ordered to pay his bill.
5.0

Came over on time, tested heating and A/C, analyzed system, made repair and demonstrated that it was now working.

Description of Work
Heating and A/C was not working. They replaced a blown capacitor for a total of $115. Took about 15 minutes.

Description of Work
Moody Heating & Air Conditioning Co. moved an HVAC for me when I was constructing a new room on my house. Moody had done the initial installation when my house was built. In fact, I was having some problems cooling the living room/kitchen. Moody came back to my house an installed another register free of charge. Moody has always been very responsive to my needs. They are very competitive in their pricing.

First off I blame myself for calling the same place 5 times in a row... The Scenario:Moody's came highly recommended.I noticed my energy bills were crazy high (300-400) and the ac just didnt keep up.Any thing below 80 degrees would make the unit run constantly.In the winter anything below 50 outside would make my house cold and the heat couldnt keep up. The calls:I called Moody's on a recommendation to report the problem.A young man was sent out that plugged up the gauges said "yep, needs a bit of freon. Not too much just a little low"Filled it and left $65.00Felt mildly better but still not great Called Moody's in winter, reported heat wasnt keeping up. Asked for David himself to come, he did not.Again some other young guy. Same deal, gauges yep needs a little freon. Here ya go 65.00 bye. Called Moody's in 105 degree weather, house wont get below 88 even at night.Asked for gold service as it comes with a "thorough inspection of your system" also known as a service agreement.Some other young guy shows up, same deal freon, here ya go bye. The confrontation:The last gentelmen said I could either pay him 150 for the "gold package" or 65 for a service call. I said well what else do you do with the gold package. He said pretty much what I just did. This infuriated me to no end that I didnt receive an inspection and heleft doing the same thing. I called Moody's to talk to David after leaving a detailed message about my displeasure for the Gold service, which he did reply but I was unavailable at the time. Instead I got the receptionist. I explained who I was and said my air was still not working to which she replied.. "The technician was at your house and did not detect a problem. If you want someone to come it will be another service call." I replied, "MAM, I was standing right next to him the entire time and he didnt do a thing other than check the freon level." She got upset cause i through a "D***" in there somewhere and hung up on me. Refusing to ever do business with Moody's again and swearing to tell every living soul my story I called another company that I found on Angie's list who did a great job. The problem ended up being a service valve being mostly closed on the outside of the unit. The conclusion:For two years I have called Moody's and complained. No one ever checked the system for a problem other than freon. The other company said "There is no way anyone who knows what they are doing could plug up these gauges and not detect a serious problem immediately." David Moody, I'm sure your a great guy but your helpers are BRAIN DEAD. 5 calls, 5 different young idiots. Not professional, didnt even fix the problem and cost me 300-400 dollar a month power bills for 2 years. I am seriously considering legal action. DO NOT DO BUSINESS WITH THIS COMPANY...unless you need freon and thats it, cause they are GREAT at that. Call Alto instead.

I heard about them from the previous owner of my house. They were excellent. They came out very prompt. The completed the work quickly. I would use them again in the future.

Description of Work
I used Moody Heating and Air to fix my air conditioner.

Thanks very much to take time out of your day to make a very nice post about our company. I know we all have so much extra time on hand so this means alot to us. Thanks very much. David Moody

Not 24 hour a day service but 7 day a week service. No job to small