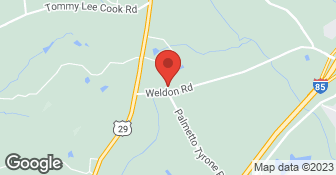 Awful! This job was started in March with the countertop install. In May, the subcontractor, hired and sent by Amazon Stone started the cabinet job, what was supposed to have taken three days, which we have in writing from the subcontractor, and is yet to be completed. The subcontractor broke and/or damaged all solid oak drawer boxes in our kitchen, a total of 23, mostly by screwing drywall screws into the sides and fronts, we have new cabinet doors, some of which are warped, hardware placement is not even, drawers and doors are not even, paint is failing and rubbing off, some areas were not painted at all, paint overspray, paint runs, no primer, warped doors, etc. The owners daughter at Amazon Stone first tried to "trick" us into signing agreeing to be satisfied prior to them doing any repairs and they'd agree to putting $1000.00 worth of labor and material into fixing the job. We don't know what it will cost, but it will far exceed $1000.00. We did not agree, so the owner, Nico, and three others met with us in our home in August. It was agreed that they would do all necessary touch ups and paint repair, order cabinet doors to replace the warped doors, rebuild the drawer boxes with like wood, stain them to match our existing drawers, and to be sure that we approved, they would take one of our original boxes and have an exact drawer made. This seemed reasonable. They would also quote on soft close drawer hardware to make the drawers more flush. We still don't have that quote, and we've waited almost 3 months for it. The drawer box was picked up on October 1st, a solid wood (oak) drawer box. On November 1st, the owner (Nico) of Amazon Stone brought both drawer boxes back, the original, and a second unfinished box, with splinters, chips and dent on the edges, a box made of plywood, not stained, and too big to fit our kitchen, not even close to comparable. He claimed to not know what it was made of and did not stay to discuss, simply said he was late, that he was only here to drop off the boxes, and ran out the door, yet, his office set this appointment up with us to meet with him, an appointment that he was 1.5 hours late for. There was no discussion. We have since sent two emails which have basically gone unanswered. The original drawer box was returned to us with the new front taken off and not returned. We now have a drawer without a front. The contents of our kitchen drawers remain in boxes in our study (9 months now) because our drawer boxes were broken and busted when drywall screws were screwed into the sides and fronts of them. They are unsafe to use and unstable. They are a hazard. We have given Amazon Stone over 6 months to make this right, and they promised to do so only to take an entire month to build one plywood box that is not comparable to the material in our kitchen. We have asked them to have their insurance carrier to contact us direct. That has not happened. We have requested them to have a competent cabinet maker contact us direct. That also has not happened. Photos are available upon request.

Dana Johnson was very punctual and professional and the work performed was outstanding.

Description of Work
Countertops in bathroom and kitchen

Description of Work
Alan (granite) and Wayne (tile) helped us from start to finish on our projects. I can't say enough about both of these guys. Alan communicated back every time we needed direction on completing our granite installation projects (kitchen and bath) and Wayne (tile) pays attention to detail and works with the customer to ensure the customer is getting the look desired. Very thankful for Wayne doing our tile because our two bathrooms were a little of a challenge! Thank you Alan and Wayne so much!! |Steve and Sandy

[Member Name Removed], Thank you so much for the kind review. We appreciate your business.
3.0

Description of Work
Designed and installed granite kitchen countertops in the kitchen, including a small bar area for 2 barstools and a granite composite sink. Nico was extremely professional and easy to work with. He paid full attention to all details of the project with his goal being nothing less than perfection. The whole process from ordering,measuring, and installation exceeded my expectations. We are so happy with our beautiful countertops!

Claire and Nico, the owners of Amazon Stone were fantastic to work with. The helped us get through a nightmare that we had with a previous contractor who installed granite countertops in our new home and did such a horrible job that they had to be completely replaced. Claire came out for the estimate and agreed that the work the previous contractor had done was awful. She even wrote a letter for me to that effect that we were able to use to recover a portion of our money from the other contractor. Claire and Nico were very responsive. Once I agreed to a quote, we went out to their showroom to look at options for replacing our countertops. (This was not an option with the other contractor as he just brought a few samples to our home to choose from.). They were very sensitive to our hesitation throughout this process and it was very clear that they wanted to move methodically through the process with us step by step to make sure that we were completely comfortable with every aspect of the process. We selected an exotic granite, and were invited back out to the showroom after the template had been completed to place the template on the granite with tape to make sure that we got exactly the parts of the slab that we wanted for each of our counter pieces. The granite was installed, we were ecstatic with it. Several weeks later we have not found a single flaw in the work that they did... and we were for it too because we are super super picky. The install was flawless. It was done absolutely perfectly and exceeded our expectations. They cleaned up their mess after the install and we received a call the very next day to ask if we were satisfied. I am a thrilled and excited Amazon Stone customer. I hope to do business with them again in the future.

Description of Work
Removed previous granite counter tops which were poorly installed and replaced with a more expensive granite.

Thank you for the great review, Scott! As the owners of Amazon Stone, Nico and I are very much hands on in our business. We do not take our customers for granted and customer satisfaction is our main goal.
5.0

They were a great company to work with. They were smooth and did exactly what they said they would do. They were willing to step up and do the job even after our contractor messed up with the communication.

Description of Work
They installed two counter tops for us.

[Members Name], Thank you very much for your review! Nico and I are very much hands on with our customers. Your satisfaction is very important to us as we take it very seriously.

Integrity Home Improvements has been in business for over 19 years. We are licensed, insured and a member of the BBB and NARI. We remodel kitchens, baths, MBR Suites, laundry rooms, basements, etc. We remove load bearing & non load bearing walls to open up spaces and modify floor plans. We also build additions and build-out basements. If you want the job done right with great attention to detail, and you appreciate good communication between you and the contractor you hired than IHI may be right for you! Trustworthy and honest, our employees strive to achieve quality work and satisfied clients. We have many "repeat" clients for which we are thankful!  …

How is Amazon Stone overall rated?

Amazon Stone is currently rated 4.1 overall out of 5.

No, Amazon Stone does not offer eco-friendly accreditations.

No, Amazon Stone does not offer a senior discount.

Are warranties offered by Amazon Stone?

What services does Amazon Stone offer?

Are there any services Amazon Stone does not offer?