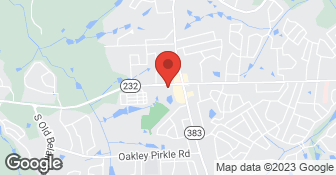 Went as planned. The Angie's list coupon was not honored.

The provider would do "monthly checks" on the in ground termite traps. We had between 10-15 at our house i believe. The company would drive up and be in and out of our house in under 10 minutes but yet left a invoice saying they checked all the traps. Upon further inspection by myself it was obvious they were just checking the block on the invoice and not hitting all the traps as multiple traps were still under compacted dirt and mulch right after the provider claimed to have checked them. Our neighbors house had a different builder and used a comptetitor to bordens. I watched their pest control check their traps multiple times. He would poke at the ground and find every last trap. He would then pull every trap out individually, inspect the bait and rebait the traps. The service we were receiving was an insult compared to what they were receiving. I swallowed my pride and let the 1 year contract finish with bordens that the builder had provided when the house was bought knowing I wanted to change providers when it was over and did not plan on renewing. Next thing I know I had a bill from Bordens showing they had checked the traps again after the contract with the builder had ended. I read my closing papers and the pest control contract and it did not state auto renewal as I was not even the one who purchased it in the first place. After getting 2-3 bills from Bordens for services i informed them I did not want they finally stopped billing me and came and picked up their traps.

Description of Work
The provider was ther termite trap and pest control provider for the new home i bought.

Bart did the estimate for our termite prevention. My wife and I like him very much. He explained everything in layman's language and quoted us a price that we were very satisfied with. He also came out with the man who was going to do the actual treatment to make sure the guy knew exactly what we wanted. The serviceman worked quickly and cleaned up his mess completely. Afterward, he explained to my wife what he had done and why. Wife was pleased. Bart had also quoted us a price for my father's house (which I am trying to sell). He said we could do the treatment for peace of mind if we really wanted to but that the house had been treated with chlordane and again recently with the new chemical. He also said that with the condition of the land the house was sitting on, it was unlikely that it would ever get termites and treatment was really unnecessary. He has over 30 years in the business, so he should know. How many companies would be that honest with you? Note: If Angie's List calls you for a verbal review, don't do it! Hopefully, the verbal review I gave the other day for Borden's Pest Control is now gone. It made Bart seem like a crook, when the opposite is what is true. Take the time to type your own review please.

Description of Work
Borden Pest Control - Augusta did liquid treatment for termites for maintenance to keep termites from actually getting into my house.

Developed a serious infestation of roaches very quickly, despite three years essentially without them. They came and recommended a total house fogging, then monthly follow up service. Rates were inexpensive Bombing a house is always a pain, but it went relatively well. Marked decrease in insects afterward. Was told it would take one to four months for them to be eliminated. Each month came and went, but after the first few weeks, the infestation remained significant. Nothing new recommended or done. Decided to jump ship for a new company, but took me a bit of time to arrange this. A new company came in, identified the problem nests (including my two year old refrigerator which had been destroyed by the infestation) did targeted treatments with immediate results. Within two months, the infestation was essentially gone. Also had termite treatments performed by Borden. I will continue with them for now, but monitor very closely.

Description of Work
rekeyed all of my doors in my new home.

Bordon was not able to solve my pest problem - it persisted for nearly a year. I hired another company and problem was solved in a couple of months.

I am satisfied with them and no issues with bugs.

We've had good work from them, but they are a little expensive.

Description of Work
They do our general pest control. They also do termite protection for us.

Description of Work
I use Borden Pest Control for pest control services and they come out every six months.

We're an owner-operated insulation business that can provide extraordinary thermal qualities by installing a highly energy efficient thermal envelope. Which in turn will help with lowering your energy costs. We can insulate your Residential or Commercial building. We have 10 years of experience in the insulation business, from spray foam to fiberglass and blown in insulation.  …

At Healthy Crawl Space, we serve our customers with the best value for our high-quality work. Call today for a free no pressure Estimate!  …

Borden Pest Control - Augusta is currently rated 4.6 overall out of 5.

No, Borden Pest Control - Augusta does not offer eco-friendly accreditations.

Are there any services Borden Pest Control - Augusta does not offer?