We offer estimates and quotes using video calling
All statements concerning COVID‑19 business operations and essential services are informational only, and are self‑reported and not verified by Angi. 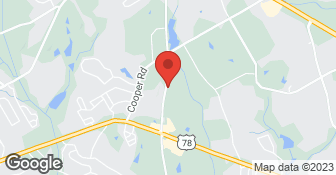 True Quality Roofing is a privately owned and operated company serving Loganville, Georgia, and all surrounding areas. We are dedicated to only the highest quality services at affordable prices. We also have residential and commercial general contractors license. We are completely licensed and insured. We offer an extensive list of services for our customers, from Gutter Repair to Insurance Claims. The full list can be found on our services page....

The team at True Quality Roofing really are a professional group of guys. They were in my neighborhood replacing one of my neighbors roofs and I stopped and was able to speak to Bryan. Bryan came out to inspect my roof and was quick to determine the problem. He was easy to communicate with and responded in a timely manner. He took his time inspecting the roof and was very knowledgeable. The guys came out, replaced our roof, and were a very professional crew. They were extremely helpful and I would definitely recommend them. I will use them again!

Very poorly. They were going door to door in my neighborhood, and I wish now I had never become involved with them. Several items listed on my contract were not completed correctly (i.e., removal of my "old" satellite dish) and they "stole" my nearly new attic vent fans and left the wires bare in the attic - we were to discuss leaving the fans, but they removed them without informing me. I upgraded the shingles on my roof but was never given any guarantee on the new shingles. My contract clearly stated that they would adhere to what my insurance paid, but after the job was completed, they billed the insurance an additional $5000, which included work they did NOT perform - such as reinstallation of said attic vent fans. I had to retain an attorney in order to ensure that I only needed to pay the balance due from the insurance estimate. As a follow-up, in February of this year I had a roof leak which was determined by the roofing company I hired to repair it that it was caused by flashing being installed upside down. The subsequent claim to repair all the damage in the home due to this roof leak was nearly twice the cost of the roof replacement peformed by "True Quality."

Well I sure wish you would have called us because your roof is warranted for life through the manufacturer, but you already know that don't you. Your GAF weatherstopper system plus warranty number is 1439628. This warranty is lifetime through the manufacture and is also transferable if you ever decide to sell your home. You also have a warranty from True Quality Roofing and we are extremely responsive to any issue and it would of course be free of charge. Your roof was installed specifically to GAF installation instruction and ridge vent was installed on your home in place of an attic vent that can go out at anytime without your knowledge. To infer you paid $30,000.00 to repair a roof leak without even reaching out to us is far fetched to be as nice as possible. You can go to GAF.com and use the warranty number that I included above for your records AS WELL AS ANYONE READING THIS CAN ALSO TYPE IN THE WARRANTY NUMBER TO VERIFY your dishonesty.
5.0

Jay came quickly to inspect our roof. He was very thorough in his inspection, as well as transparent on what the issue was. He was able to make minor repairs same day, and was reasonably priced. We would gladly use his company again!

Jay was prompt and friendly when he came to do an inspection of our roof and remove debris and trash left by builders. He took his time inspecting the roof and was very knowledgeable! Should we ever need more roof work done we will definitely use True Quality again.

Description of Work
Removal of debris and inspection of roof.

I found True Quality Roofing on Angies list and read their reviews. I reached out and spoke with Jay. About 3 months ago, I called about a possible repair and Jay came out the next day. He inspected the roof and we discussed what needed to be done. I asked when they would be able to schedule it and he told me he would do it while he was there. If that’s not service I don’t know what is! Jay was super professional and courteous... not to mention timely. Thank you so much for what you do. I was concerned about the repair and it was fixed within a day!

I recently had roof damage due to several hail storms. I contacted my insurance agent and friends for recommendations. True Quality Roofing had the most sincere, real reviews. One call, and Jay was here the same day to inspect my roof and explain exactly what needed to be done. He met with my adjuster and everything began to happen. I had several occasions to speak with other employees at True Quality Roofing, they were always very understand, helpful, kind and polite. The crew from True Quality Roofing were punctual, efficient and worked non-stop. They handled every detail with the insurance company and the install. I can't say enough about TQR and their people!!!

Very prompt, showed up with proof of insurance (which seems rare these days), got us on the schedule in a reasonable time frame, and had room to reschedule due to rain. Showed up on time to get started, and finished in a day (as expected).

During the initial visit I asked for help to remove a tree from the garage, tarp the damaged section, and provide an estimate for the work (including electical). He said they would "help me out" and could probably have this all done in about a week or two. After the tree guy was a no-show, I had someone else take care of that and the tarp. I informed him that the tree was out of the way and to proceed with writing up a contract. The next day, work was started without my knowledge while I was at work (still no estimate or contract). He refused to provide an estimate without the scope from the insurance. Once the scope was provided, he said he needed the numbers as well. Again, I told him I needed an estimate because some of the things were not on the scope that I wanted to add (I.e. gutters, leaf guards, etc). During the last phone call he finally just blurted out a flat price for the work, and then he said I just need to find someone else to do the work.

Description of Work
Roof repair/replace after the storm came through (Irma).

Customer agreed to Have work done for insurance proceeds. We began repairs before the insurance scope arrived and once it arrived the customer decided to not share the insurance scope of work. after explaining at least nine times to the customer that profiting from an insurance claim is a felony in this state and we would not be a party to that we decide that it would be best for them to seek services of another contractor. Although the good news for them was that the $1200.00 plus in repair cost to us that had already been complete would not be owed. Our gift to them, so I can't even fathom a bad review for free work.
5.0

Dwight was was very informative about everything that was going on with my roof. He arrived right on time and told me exactly what needed to be done. I will definitely used their services in the future.

Service was excellent. Everything was on time and the quality of work was as described.

Description of Work
I had a roof leak that I wanted repaired. Upon inspection by True Quality it was found that our shingles were found to be defective 6 years ago. Our insurance company covered the replacement of our entire roof.

Our company is a family owned business committed to providing the highest quality services resulting in meeting or exceeding the expectations of our customers. Through teamwork and understanding, we constantly strive for continuous improvement, positive community involvement. Gutters and downspouts are critical to ridding the roof of water and getting it away from the home’s foundation. We also offer guard installation. Our 6″ K style gutters are capable of moving more water away from your home fast, even during heavy downpours. Gutters are an important feature of a home and can add value to anybuilding. They help to carry water away from the foundation, thus protecting the very thing upon which the home rests. Water is the most destructive force to any building, and is a silent killer that can eat away at the foundation of your house. The size most used today is a 6-inch gutter with a 4-inch downspout. The most common material is aluminum with a baked on enamel paint. Call us today Reach out to us and someone on our team will reach back asap 470 318 4388 cccustomgutters@gmail.com www.accmorethangutters.com Professionally Installed - Seamless Gutters - Install and Replace Gutters - Install and Replace Downspouts - Repair and Replace Section of Seamless - Install and Replace Gutter Guard/Covers - Soffit and Fascia Fully Insured Free Estimates Good discount  …

True Quality Roofing is currently rated 4.8 overall out of 5.

No, True Quality Roofing does not offer a senior discount.

Are there any services True Quality Roofing does not offer?