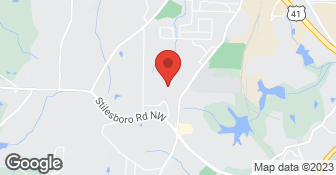 We have been specializing in earthwork since 1987, gaining experience and using our knowledge to produce high quality work. It is our mission to not only save you money, but stress as well. Honesty and integrity are priorities and we have never begun a job that we didn’t see to completion. We hope to be able to serve you....

Danny showed up on time and took the time to understand te job, then went and did it quickly and professionally.

Description of Work
backhoe excavation and soil movement with bobcat

These guys did an awesome job on my retaining wall and lawn grading project. Danny came out the day after I requested an estimate and had the crew scheduled to start work 3 weeks later. The wall came out better than I could have hoped for and the lawn is looking great after they graded and laid the sod. Julio and Jose, the 2 man work crew, were great to work with as well; making sure all of the small details were covered.

Description of Work
Install a 30x3ft retaining wall in the back yard, grade front and back lawn, and install sod.

Stopped work. Gave them an A for responsiveness and punctuality because they responded quickly and showed up on time to ruin my yard. RS, LLC did not obtain permitting or engineering and built a defective retaining wall. This wall has been verified defective by a structural engineer. I contracted with RS, LLC 8/19/2017 for the construction of a 5' retaining wall around my house and 2 other major jobs. Prior to the construction start, I was informed by Danny Wang d/b/a RS, LLC that they were not intending to obtain a permit because he was unsure if he needed one, but would check and get one if required. He also stated that even if he did not obtain one, they would just have to pay a fine and move on. He also said that we did not need to get an engineering diagram because he had an engineer "on staff" and that this was an "engineered wall anyway". Both of these statements were found to be a direct violation of the law and ordinance of Cobb County. During the construction of the retaining wall, it was found that the company was not following installation guide regulations and specifications by the manufacturer of the retaining wall, Versa-LOK, contrary to the contracted agreement. When I questioned Danny Wang about these actions, he told me to go the manufacturer's website and I will see that they are following installation guidelines exactly. After doing this, I again approached him the next day and told him that I still had concerns and that I would like them to stop until I could verify that they are doing it correctly. Danny stated that "If I make them stop, you will not be able to afford us to come back and finish the job". I contacted the engineers of versa-LOK and local distributors of their products and they unanimously stated that the wall was improperly installed and that RS's "Lifetime warranty" would not be backed by them. I asked RS to stop work and that I was not going to pay them any more money above the $10,477 that I had already paid them for the down payment and they should not work another day until we figure this out. Danny stated that he would "see me in court if I wanted to play hardball". I hired a structural engineer for $795 who verified that the wall needed to be dismantled and also asked local county building inspectors of Cobb County to inspect the wall, which failed to pass any inspection. There are multiple defective qualities including, "no drainage behind the wall as required, no backfill behind the wall as required, the wall footing was not constructed properly, and the wall was placed too close to a steep embankment, in addition to the permitting issue. After the results of the inspection were communicated to me, I contacted RS, LLC and tried to find a resolution that would work for both of us. To date, no resolution exists. Before the 60 days elapsed where I could file a dispute with American Express, I filed and received a refund for the $10,477. RS is demanding that I pay the full contract amount of over $26,000 for an unfinished, defective wall and no other work. We have court this week.

Description of Work
Retaining wall, stairs and patio for an amazing back yard.

Regal Stone LLC 1954 Westover Lane, Kennesaw, GA 30152 (770) 426-8063 cell (678)938-0056 Website-regalstone.net 01-23-18 Regal Stone was contracted to build a 5 foot retaining wall without engineer drawings and without a permit evidenced by the signed contract stating that drawings and permit were extra. The homeowner understood these conditions, extra costs of drawings, permit and signed the contract. The wall was not contracted as a reinforced wall and is not defective. The contract signed 8-19-17 was the second of 3 contracts signed by the indecisive homeowner after adding square footage to the wall and the homeowner had full knowledge of requirements and accepted the risk of fines. A change of work order was signed on 8-28-17 and the next day, after additional materials were delivered, the homeowner stopped work and ordered Regal Stone to go home. The homeowner promised to pay for on site materials and work completed. The wall is 95% complete, the pavers 30% complete and the steps are 30% completed. Later the homeowner insisted he would only pay the contractors price for materials. Regal Stone delivered the materials and is in business, not a charity company. The statement that Regal Stone said they had an engineer on staff is a lie. The homeowner emailed that he was getting an inspection of the wall. Again, the inspection was for a reinforced wall. Regal Stone emailed our right to get an inspection. Again, the wall in the inspection is a reinforced wall and that is not the kind of wall Regal Stone was contracted to build.
5.0

Regal Stone (e.g., Danny Wang) was very responsive to my work requirements, their bid was quite reasonable, their professionalism was outstanding, and the work performed was timely and excellent.

Description of Work
I wanted to have a low boundary wall constructed around one side of patio, some old shrubbery removed, a tree stump removed, and the back yard re-sodded.

He's honest, but needs to have explicit instructions from the beginning. Happy with the end result.

Description of Work
Take out an in-ground pool and replace with pavers, rocks and artificial turf. Also replace grassy area where pool with path and plantings.

Danny and his crew were great to work with. It started with the bid. Danny called and said he would be at our house at 1:00 p.m. on a Saturday, and he was there right on time. He provided us a very fair bid to build one retaining wall in our back yard. When that was completed (on time) we asked him to build another wall for us. His crew showed up on time and were extremely nice and professional. They cleaned up at the end of each day their work was amazing. We then asked for a third wall in our driveway because his work was so good. He even went beyond what was required by fixing our driveway surface and some drainage issues we had in the back yard. I would hire Danny back again in a heart beat.

Danny is a great guy, but I think I overpaid for what he provided. I wish he had pressure washed my driveway after having driven all over it and making it dirty. I am considering a larger job, and I had hoped we would be an automatic re-hire, but that is not the case as I stand right now. I will update this review after he bids on the driveway job.

Description of Work
Grading, with mulch and gravel.

The job price was agreed upon and a contract signed before work began. Work was completed and customer appeared happy. Pressure washing was available upon request but customer never mentioned it. We feel the job was fairly priced and quality work was delivered. We would be glad to work for [member name removed] again.
2.0

I was supposed to be at my house between 8am-8:30am and he showed up around 8:57am. So we started on the wrong foot. He said that he would end up getting some day laborers and that my home owners insurance would have to cover them. I thought this felt a little sketchy so I refused the work.

Description of Work
Gave me an estimate on yard work and drainage work.

Some estimates run long and traffic delays are unexpected. We will try to call each time delays happen.
5.0

We got 3 different quotes to have a big concrete slab removed from our backyard. Regal Stone had the lowest quote so we went with them. I was very pleased with his prompt response to my call, willingness to drive down to Decatur to look at the yard and give me a quote (he ended up having to come down twice- which was completely my fault, but he seemed like he was more than happy to do it so that he completed understood what I wanted). He did an excellent job on our yard, and completed the work for what we were quoted. I would definitely use Danny Wang again in the future!

Description of Work
Removed a large concrete slab (where an old carport used to be), a walkway, and a cement block foundation. Then he prepped the yard for sod.

I guess he did what we expected him to do. The time we had scheduled to do the work, one of his equipment broke down and he only came with one of the equipment that he needed to do. He did pretty good job for the money he charged us and he did some extra stuff too. Overall, I am satisfied with the job he did and I think we got what we paid for. Their price was good compared to other companies.

A locally owned and operated family business that provides concrete lifting services using polyurethane foam. Our Company has over 25 years in the polyurethane industry. This gives us the knowledge to diagnose the cause of your concrete issue and formulate a remediation plan that will resolve the issue.  …

Basement Correctors is a full-service Waterproofing Company dedicated to solving moisture problems in residential and commercial buildings in the Chattanooga and Northwest Georgia areas.  …

Insured
All statements concerning insurance, licenses, and bonds are informational only, and are self-reported. Since insurance, licenses and bonds can expire and can be cancelled, homeowners should always check such information for themselves.To find more licensing information for your state, visit our Find Licensing Requirements page.
General Information
Free Estimates
Yes
Eco-Friendly Accreditations
No
Payment Options
Check
Emergency Service
Yes
Warranties
Ask for details

Regal Stone LLC is currently rated 4.4 overall out of 5.

No, Regal Stone LLC does not offer eco-friendly accreditations.

No, Regal Stone LLC does not offer warranties.