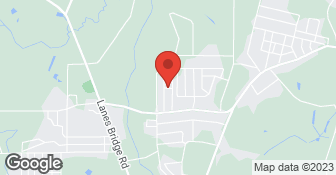 The initial tear out went fast, but was messy. Mr. McCutcheon would not show up on some days and would say his vehicle broke down. The floor replacement and shower expansion was extremely slow and tedious. There was never much progress for the amount of time he was there. However, Mr. Donald McCutcheon would ensure that he asked for at least $500 weekly so he could keep working. The contract stated $500 deposit and remaining balance of $2500 due up on completion. So yeah, he saw me coming and took extreme advantage of our kindness. This cost me a total of $2800 in labor and another $5K in materials. The floor tiles that were put down had to be pulled back up twice because the grout would crack a few days after they went down. He installed the toilet and used cardboard to shim it!! Guess what, it leaks now! Turned water off and disconnected water supply, then either him or his worker took a dump in the toilet and left it there. When I turned the water on to flush, my floor was flooded and water ran through the garage roof into light fixtures. This led to all of my breakers blowing! I should have thrown him out after this. He was using a sawzall to remove drywall and cut through one of my PEX water supply lines, guess what....new leak! I am in the Army and had to leave home for work. He worked a couple of days after I left and then never came back, just telling my wife his truck broke. Three months with no master bathroom, and we are still at square one. We have hired another contractor which has had to rip out all of this very very poor work and craftsmanship. Donald McCutcheon assured me he put insulation in all of the outer walls in the shower, when materials were removed, guess what...no insulation. STAY AWAY FROM THIS GUY AT ALL COSTS!!! HE SCREWED ME AND MY FAMILY BIG TIME. I AM OUT OVER $7K and now have to sell stuff to hire another contractor. This guy IS A LIAR AND A FAKE. DON'T EVEN LET HIM CUT YOUR GRASS. PLEASE HIRE A PROFESSIONAL. My lawyer is currently compiling all the pictures and the contract so we can file a lawsuit. Not sure what good it will do, but this guy stole a lot of money from me and my Family, and I don't make that much money ..... I am Soldier for God's sake, not rich by any means. Thanks for screwing us Mr. Donald McCutcheon.

Not too good. Started around 16 August 2011. concrete demolition, new patio & driveway extension dug out. Demolition including sawing through the old concrete. That sprayed concrete dust splash on the house, window, air conditioner unit. They didn't clean that off. You can still, to this day (June of 2012) find spatter.Around 18 August 2011 concrete was poured. I had read about concrete needing to be wetted down for curing, but he said he'd never heard of that or had done so. 25 August 2011 or thereabouts the building materials were delivered. For this part of the project he DID get a permit. And they told him the 4x4s he originally had delivered were not to spec and he had to get 6x6s. I had thought 4x4s would've been fine, too, so we were both surprised by the permit requirement. But such is life. By 25 August the new structural material was in. By September First, the holes were dug for the support beams. They were finally erected on September seventh. 15 September 2011 the framework is going up. 25 September 2011 -- roof partially installed. 2 October 2011 -- roof pretty much up, but still a lot of finishing work to be done. They came by one day when we weren't there, cleaned up the general area, but left the red-tip stump in the middle of the back yard. We had spoken about this several times, but all they did was drag it from next to the patio to the middle of the back yard. And there it sits today in June of 2012. Several months ago, the fellow who had recommended this outfit came by to visit. I asked him to take a look at the work. He was appalled. Sewage vents weren't run through the roof, the patio was leaking terribly, and the whole job just wasn't finished. Our calls to this company were ignored. Originally, the fellow who recommended this company was going to get his house done after ours, then another lady had spoken with the referrer and she was going to go to this contractor, too. We all tried calling, none were able to get in touch with him. The referrer saw him on the road, tried to flag him down, but the contractor just pulled away. I called the building permits folks and they told me there had been no permit pulled for the roofing work. I watch Mike Holmes, the Canadian contractor guy on TV. I KNOW I was too trusting. i have to find another contractor, and that's really emotionally draining. I hate the leaking carport & patio. I can't even USE the patio when it leaks. I hate the incomplete sewage vent situation. Generally, I hate the job he did, and I wish I had never tried to get this work done. A very costly mistake on my part.

Description of Work
Wanted to get house re-roofed, and along with that get the driveway extended, a carport cover, patio enlarged, and a patio cover. Wanted a metal roof. also wanted a red-tip dug up and disposed of (so it wouldn't grow under & disrupt the new patio). Specified I wanted permits and drawings. Got the house re-roofed, but the job is incomplete.Got the driveway and patio extended/enlarged/combined, but the concrete work is shabby-looking and there are lots of lumps up near the house.Got the patio and driveway covers (structure and roof). However they leak like a sieve. Also got a lot of song-and-dance about the drawings and permits (that should've been a real warning sign, but I was gullible).Never did get a permit pulled for the main house re-roof.Turned out he wasn't licensed at the state level.

Kitchen, Bath and Windows Plus

Kitchen and Bath Plus LLC has proudly served the Coastal Empire and the Low Country for 24 years. We provide our customers the peace of mind knowing their remodeling investment is being handled with pride, integrity and attention to the details that matter most. Our attention to detail is one of the many things that sets us apart from the rest. Check out our website: https://kbwps.com/ For product information and Replacement Window Pricing  …

Offering any form of handyman and light construction.  …

HUNTER HOME IMPROVEMENTS is currently rated 2.3 overall out of 5.

No, HUNTER HOME IMPROVEMENTS does not offer warranties.