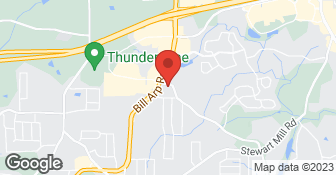 1 Roof Atlanta is a primary contracting company that specializes in roof replacement and repair. 1 Roof Atlanta also specializes in working with your insurance company should the need arise. If you are looking to replace your roof, siding, gutters or painting, please call us today and our professionals will provide you the service you deserve

First introduction to 1 Roof Atlanta was a "storm chaser". We had a recent hail storm and a rep showed up at our door to offer a damage assessment. We had considered calling someone after the extensive local storm, but had not pursued it. I was leery of anyone just showing up at the door, but the rep demonstrated his expertise and finesse when he scheduled an appointment with our insurance company on the spot. On the date of the insurance review, 1 Roof Atlanta's rep spent considerable time with our adjustor. The result was a check on the spot for replacement of the roofing material, less depreciation. (Depreciation would be funded upon completion of a completed work receipt under our "replacement cost" policy terms.) The work crew that showed for the job arrived bright and early, but their start was put off by a 2 hour rain. They waited patiently to start. I was concerned that the job would be hurried by the delay, but the crew worked diligently well past when I expected they would otherwise leave, finishing up in the dusk. The finished job was near flawless and better than I had hoped for. There were some nails left in the gutter and garden bed, since clean up had been problematic in the dark. They returned to clean things up. Subsequent work two months later, when a pine tree fell on our house during a storm, was equally up to snuff. Bottom line, I recommend 1 Roof Atlanta and Jeremy Durell for anyone's roofing requirements.

They did a good job. They were prompt.

Description of Work
The did the roof over the living room and kitchen area.

A Plus Power Cleaning

For more than 60 years, ’58 Foundations & Waterproofing has provided the highest-quality basement waterproofing, crawlspace encapsulation, radon mitigation, mold removal and foundation repair solutions for homes and commercial properties. We lead with a promise of Trusted Five-Star Service, which means the customer experience is at the center of everything we do. Since 1958, we have been steadfast in keeping this promise and in upholding the values on which '58 Foundations was built: trust, teamwork, integrity, respect and communication. This comes across in all that we do: from the initial call to job completion, our customers are met with a knowledgeable, caring, and professional staff prepared to offer a five-star experience that is unmatched in the home repair industry.  …

We install pine straw. We also do retaining walls, paver stone patios, hardscapes, any type of yard work, over growth clean ups, bush trimming, bob cat work, track hoe work, small land clearing, leaf clean ups, flower and bushes installed, trees installed, small trees removed, french drains installed, and any type of yard work you could want, The only thing we don't do is lawn maintenance we don't mow grass regular but i will do a one time clean up to get you ready for maintenance. We also have a licensed and insured.pressure washing company. We soft wash roofs and homes and do 200 degree hot water wash for concrete. We also restore decks and fences we have cleaned and stained a lot of them.  …

How is 1 Roof Atlanta overall rated?

1 Roof Atlanta is currently rated 5 overall out of 5.

What days are 1 Roof Atlanta open?

No, 1 Roof Atlanta does not offer eco-friendly accreditations.

No, 1 Roof Atlanta does not offer a senior discount.

Are warranties offered by 1 Roof Atlanta?

What services does 1 Roof Atlanta offer?